The BADIL Resource Center for Palestinian Residency and Refugee Rights has submitted its written report for the consideration of the Independent Commission of Inquiry of the 2014 Gaza Conflict. Though BADIL notes with great concern Israel’s refusal to permit the Commission of Inquiry access to the occupied Palestinian territory (oPt), this refusal should not be allowed to hinder efforts to achieve full accountability for all violations of international humanitarian law and international human rights law inside the oPt. 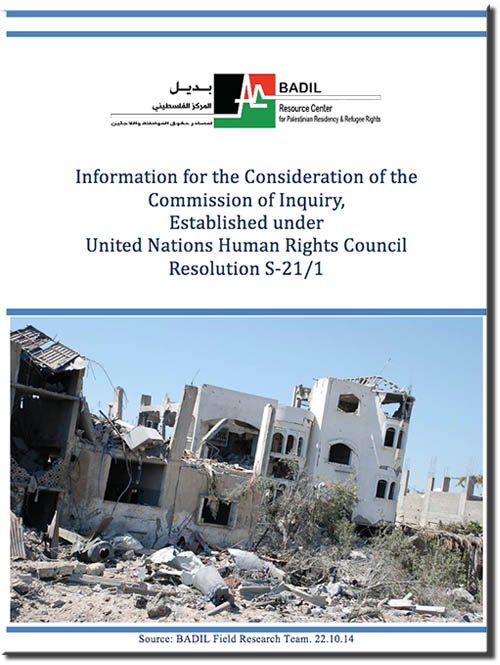 Accordingly, BADIL’s submission raises the real and extensive issue of Israeli-perpetrated forcible transfer of Palestinians inside the oPt. The submission is the result of extensive field and desk-based research, and draws upon two central case studies – those of Palestinians inside the Gaza Strip in the context of Israel’s military assault in the summer of 2014, and of the intended forced relocation of Palestinian Bedouin communities in the central West Bank. Both case studies draw heavily from the personal testimonies of affected Palestinians, emphasizing the vast human impact that accompanies the inherently unlawful warfare practices deployed by the occupying power.

However, these cases should not be viewed as isolated processes, but rather the latest manifestations of a systematic policy of forced displacement of Palestinians by the state of Israel. This policy finds its roots in the Nakba of 1948, and the net result is the world’s longest running refugee crisis, with the continued displacement of 7.4 million Palestinians, representing 66 per cent of the global Palestinian population.

BADIL therefore calls upon all relevant bodies to both suitably punish without delay those responsible for the forcible transfer of Palestinians, and to take all necessary measures to address the root causes of this most heinous form of international crime.