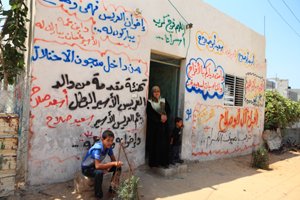 Photostory: Thousands of Palestinians still displaced in the Gaza Strip 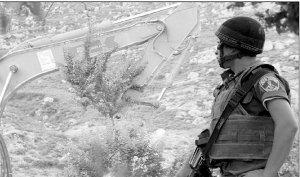 “We will replant these trees again”

Visitors of Artas are amazed by the beauty of this small village located South-East of Bethlehem. Artas is renowned for its water sources and fertile lands that run throughout the valley covered by greenhouses and trees. It has around 4,000 inhabitants and hosts and annual Lettuce Festival. Artas, however, is also located close to the ever-expanding Gush Etzion settlement bloc and the route of the Wall. Last year, construction started on the hills surrounding Artas. In May this year, inhabitants discovered with concerns that the bulldozers were moving increasingly down, in the direction of the valley. The first land threatened with confiscation and destruction was a plot covered with beautiful apricot trees belonging to the Abu Sway family. One Year After: Update on the Situation in Al Aqaba and Yanoun Villages

When I was asked to go back to two villages I had visited last year to write an article on the situation in al Aqaba and Yanoun, I was very pleased. I have been impressed by Yanoun and Al Aqaba; these villages that have resisted years of harassment and attempts to erase them from the map. Yanoun is located next to Nablus, and is surrounded by the settlement of Itemar. As a result of repeated attacks, all the residents of Yanoun were forced to leave in 2002. They all came back after a permanent international presence had been established. Since then, the villagers have stood together against the continuous threat of the settlers.

Struggling Alone for My Children’s Future

The Al-Liddawi family lives in the middle of Al-Wihdat refugee camp in Amman, one of the biggest camps in Jordan. They come from Jaffa, but came to Jordan from Gaza, which means that they have a different status than most other Palestinian refugees in Jordan. They cannot have a Jordanian passport and have restricted access to services. “Palestine at heart” for a Palestinian refugee writer in Amman

Dr Sanaa Shalan appears immediately as a strong, successful, articulate and proud young woman. Sanaa is a highly respected professor of Arabic literature at the University of Jordan. At only 27, she is a renowned writer who has won 32 awards, among them the Al-Shariqa Award for Arabic creativity for the story The Nightmare and the first Young Author Award of the Abd-Al-Muhsin Qatan Association for her short story collection Aina Khader.

But above all Sanaa is a Palestinian refugee. She has a promising successful carreer in Amman, but she does not forget where she comes from and she strongly speaks about her identity as a Palestinian.