The Status of Palestinian Refugees and Stateless Persons in Europe

This article is based on a paper drafted by BADIL for the Council of Europe (CoE) Hearing on Palestinian Refugees and Stateless Persons in Europe, 16 December 2002 (Budapest) 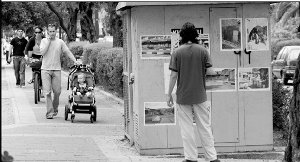 On Thursday morning, 10 May 2007, the inhabitants of Haifa, Jerusalem and Tel Aviv, woke up to find some walls of their cities covered with photographs of the kind they are not used to seeing. Over night, some 1600 pictures representing 40 copies of the photo exhibition “40 to 67” had been hastily put on more than 200 walls in the streets by dozens of volunteers.  Since then the photos have been exhibited on many other occasions and events, on Israel’s Wall in Anata and in Aida refugee camp, as well as during demonstrations and events against the occupation in Israel and in various countries of the world.