On 11 January 2003 some 50 women and men of various ages gathered in the yard near the old city mosque in Lod (Lydda) to remember the Nakba. Eitan Bronstein of Zochrot welcomed the participants.

Dr. Mahmud Muhareb, a history lecturer at Beersheva University described the political and historical background of the 1948 war. He also described the general pattern of action taken by the Zionist forces as they expelled the Palestinian population. He also explained the way this policy of depopulation was applied in the city of Lod. The Zionist army surrounded the city leaving one path – in the direction of Ramallah – open for the local inhabitants to escape. The army then went into the houses and forced the people out. Able-bodied men were sent to labor camps. The others were directed to the road to Ramallah, while soldiers shot over their heads to scare them away. 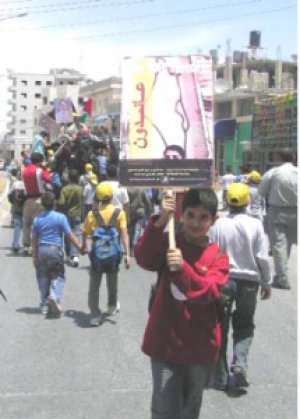 The Moral Scandal of the Time

The political and social nature of Zionism embraces a particular vision towards the Arab person in general, and the Palestinian person in particular, concerning his/her nature, culture and the existing relationship between this person and his/her homeland. This vision, however, contradicts the entire facts regarding the Arab person’s existence; in fact, Zionism and Arab existence stand in total contradiction to each other. This vision provides the fundamental basis for Zionist policy including land expropriation and displacement of people by brutal means, and is derived from mythology and past historical events.

The fundamental nature of Zionist ideology and culture manifests itself in three main ways: racism, aggression and expansionism. By this I mean, racism that considers the other as the enemy, and aggression as a natural consequence of racism which manifests itself through Israel’s continuous aggression against the Palestinian people. Finally, by expansionism I mean occupation, displacement and expatriation of the Palestinian people, destruction of villages, new plans for collective displacement (i.e., transfer pol icies), in addition to Israel’s aspirations for additional territory, and the creation of other new tragic realities on ground.