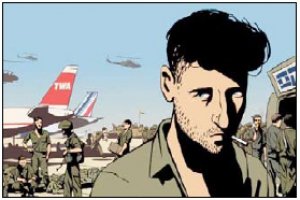 Waltz With Bashir: A Case Study on the Complicity of the Israeli Cultural Industry with Israeli Apartheid

The film is an animated story of the filmmaker himself who, years after the Israeli invasion of Lebanon in 1982, is compelled to look into his past when an old friend tells him that he suffers from nightmares about his army service, making Ari realize that he remembers almost nothing about that time in his life. He sets about contacting soldiers from his unit to piece together snippets of memory of their participation in the invasion. The film depicts the invasion of Lebanon in graphic animated detail, culminating in Ari’s belated recollection of his unit’s participation in the Sabra and Shatila massacre. The images of the massacre in the film were all too similar to those we saw on the news of the horrors inflicted on the people of Gaza, and reviews were quick to point out the timely release of the film.