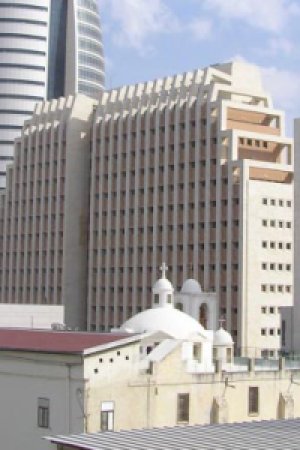 The following photo essay is the result of a Zochrot tour to Haifa in November 2004 as part of Zochrot's mission to explain the real history of Israel and the Nakba to Israeli Jews. The tour took visitors into old Haifa much of it remaining as it was after the Nakba in 1948. Israeli Jews have taken over most buildings as the owners are declared absentees. Some buildings are being prepared for redevelopment as luxury apartments with views of the harbor below and Akka (Acre) across the bay. Haifa was once a majority Arab city, a thriving Palestinian Arab center of commerce.

Haifa, Israel today is a city of 275,000 with grand vistas and boulevards, a renowned university, magnificent architecture from the 1800s and art deco from the early 20th century, the main shrine of the Baha'i faith, a bustling port, restaurants, bars, cafes, a beach and a thriving culture of writers, cinemas and live theatres. Haifa's port was first developed in 1908 by the Ottoman Turks and expanded by the British in 1929. It is now considered Israel's main port. Haifa is less than 100 km north of Tel Aviv, 40 km from the Lebanese border and across the bay from the ancient city of Akka.

But there is another Haifa, the Haifa built on an Arab Palestinian city. On 21 April 1948, 5,000 soldiers organized by Haganah (Jewish paramilitaries) and IZL troops others attacked the city which was defended by only about 500 Palestinian volunteers and the Arab Liberation Army. Some 72,000 Palestinians fled north from the city, mainly to Lebanon, and 41,500 from surrounding areas.