Caged in, Locked Out

Entry to the occupied Palestinian territories (oPt) through the only available route, via Israel, has always been a nerve-racking,tire some and extremely invasive affair. Unbearable delays, grueling interrogations, strip searches and other forms of humiliation are amongst the best case scenarios. For internationals attempting to enter Palestinian territories, the ever increasing threat of deportation is always looming overhead. 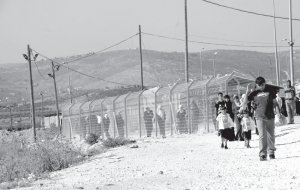 The saying that occupation exists best in the dark explains one reason for the controversy surrounding the use of the term Apartheid to describe the Israeli system. It also explains why what is a clear and simple fact to those intimately acquainted with the reality on the ground has caused so much confusion or strife among those who are not.

Generally speaking, there are three sides to the debate about the use of the term to describe Israel’s political system and its comparison with South African Apartheid. Staunch Zionist defenders are completely against the use of the term, charging it as ‘anti-Semitic’, with no thoughtful discussion of the issues. By dismissing the criticism as a personal attack, they fail to account for the basic facts and reality on the ground and reveal their limitations in understanding or wanting to know the severe injustices committed in their name. Then there are activists, academic and legal experts who support the use of the term.