Update - Campaign for the Defense of Palestinian Refugee Rights

The third annual meeting of the Palestine Right of Return Coalition was held in Tisvildeleje (Copenhagen) between 12-15 December 2002. The meeting was convened at the invitation of BADIL Resource Center, in coordination with the Danish-Palestinian Friendship Association and the Right-of-Return Committee-Denmark, and in consultation with all Coalition members in Palestine, Syria, Lebanon, Jordan, Europe, and the United States. 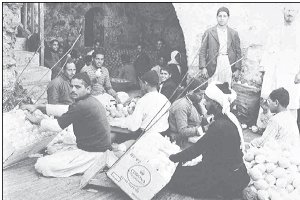 Oral history was, and will remain, one of the main sources of socio-historical understanding. One can say clearly that oral history is as old as history itself, especially important before the advent of writing as a means of communication, and later on as a main source for documentation. In the seventh century - the early years of Islam - and later on, controversy reigned over interpretation and the authenticity of the collected hadith (the oral speeches of the Prophet Muhammad), and other prominent personalities including al-Sahaba, who accompanied him in his prophetic mission.

The gathering of all the spoken hadiths of the prophet from oral sources of his companions, and the long period that elapsed before recording in writing, poses a serious question concerning accuracy and authenticity of the collected accounts.