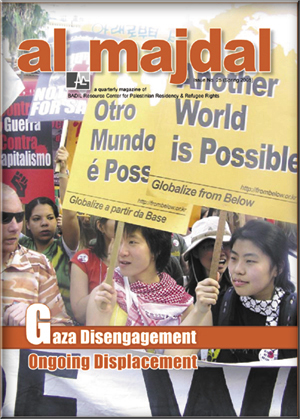 The Gaza Strip will continue to be occupied territory even after disengagement. But the problems with disengagement do not stop at the Gaza border, says the editorial in this issue of al-Majdal. Both left and right Zionist political parties in Israel agree that one of the main purposes of the disengagement plan “is to maintain Israel's Jewish demographic majority. In exchange for redeployment from Gaza, it seems that Israel will be permitted to retain its large colonies in the West Bank...The process of colonization on both sides of the 'Green Line' - i.e. the 1949 armistice line-- thus continues unabated.”

The editorial calls on the international community to disengage from Israel and isolate it until Israel complies with international law “as every other normal state”. This issue also reports on The Absentees' Property Law which is another means Israel uses to deal with the demographic threat.

Ali Kazak, head of the Palestinian Delegation to Australia and New Zealand, asks in al-Majdal: “Who is responsible - the Jews of the Zionists?” He says that instead of reviewing its policies and practices, Israel is accusing its opponents of being anti-Semitic. He says that the international community should put an end to the “extremely dangerous Zionist game of playing with words, challenging international law and norms and turning facts upside down because the damage this causes goes far beyond the Palestinian people and affects Jews themselves and the world at large”.

Al Majdal also reports on the 5th World Social Forum, on workshops on assessing how Palestinian refugee communities living in exile can build civic structures and mechanisms for communication with their national representative and its institutions as well as host countries, agencies that serve them and other refuge communities, the recent meeting on Palestine under the auspices of the Committee on the Inalienable Rights of the Palestinian people, the Impact of Israel's wall on refugees and carries an interview with outgoing UNRWA Commissioner-General Peter Hansen.

In other articles, al-Majdal looks at the UNRWA's policy on official and “unofficial” refugee camps, a monitoring report by the University of Geneva's Graduate Institute of Development Studies on the situation of Palestinian refugees in the occupied territories and on displacement of Palestinian Arabs from the villages of Baqqara and Ghaname who were internally displaced in Israel after 1948, expelled to the Syrian Golan Heights in 1956 and displaced again during the 1967 war.

will Ariel Sharon’s plan for disengagement from the Gaza Strip bring Palestinians and Israelis one step closer to a political settlement of the conflict? The international community (read ‘Quartet’) seems to think so. After all, not since Sinai has Israel been willing to dismantle colonies it established on illegally occupied land. The international community today speaks about a moment of promise and opportunity for Palestinians and Israelis. They point towards the election of Mahmoud Abbas as President of the Palestinian Authority, the Sharm ash-Sheikh summit (8 February 2005) between Ariel Sharon and Abbas at which Israel agreed to “cease all military activity against Palestinians” who agreed to “stop all acts of violence against Israelis”, and Palestinian municipal and Legislative Council elections later in the year.

Nearly five years after the beginning of the second Palestinian intifada the international community has given the signal that now is the time to re-engage towards a political settlement of the conflict. The US has appointed a special security envoy (General Ward) who is stationed in the region, both Sharon and Abbas have been invited to the White House, the Quartet appointed a special envoy (James Wolfensohn), the UK organized a meeting in London on Palestinian reform, and Russia called for an international Middle East peace conference in Moscow.

Wiping Away the Traces – Update on Lifta Development Plans

Israeli planning officials have agreed not to demolish the mosque in the depopulated Palestinian village of Lifta. It will be designated as a public structure and the village cemetery will be marked as public space. The slight changes to the city development plan for Lifta to transform it into a commercial and residential center, do not meet objections of refugees from Lifta, Zochrot and Bimkom (Planners for Planning Rights).
The Local Committee for Building and Planning in Jerusalem has, in effect, given a green light to the Israel Lands Administration (ILA) to destroy the remains of Lifta and to construct a residential neighborhood in their place. Zochrot toured the village to protest against this destructive plan alongside refugees from the village. Zochrot has suggested the city should maintain the village as a memorial site to educate the Jewish Israeli public about the history of 1948 as long as Palestinian refugees are unable to return.

An international effort to challenge the JNF’s charitable status could form an important component in mobilizing a broader international movement against Israeli apartheid. In 2006, people in Palestine will be marking the 30th anniversary of Land Day. It will also mark the year when the world will observe the 30th anniversary of the entry into force of the International Convention on the Suppression and Punishment of the Crime of Apartheid (on 18 July 1976) – a largely forgotten convention that was never ratified by Israel (or other settler-colonial states like the USA, Canada, Australia or New Zealand for that matter), but that clearly outlines the illegal nature of the apartheid policies practiced by the Israeli state and its affiliated agencies.

“Palestine Does not Have to Bargain to Obtain its Human Rights”

Role of Civil Society in Ensuring Adherence to International Law

The United Nations International Meeting on the Question of Palestine took place under the auspices of the Committee on the Inalienable Right of the Palestinian People (‘the committee’) at the UN Office (Palais des Nations) at Geneva on 8 and 9 March 2005. For this conference, the Committee chose the theme: Implementing the ICJ Advisory Opinion on the Legal Consequences of the Construction of a Wall in the Occupied Palestinian Territory – The role of Governments, intergovernmental organizations and civil society.

The Naqab Battle: A Battle for the Land and the People

Today there are about 150,000 Bedouin Arab inhabitants of the Naqab (Negev). Half of them live in seven villages recognized by Israel: Rahat, Tel as-Sabe, Ararat, an-Naqab, al-Leqiyah, Shaqeeb as-Salam, Horah, and Kaseefa. The remainder live in some 45 'unrecognized villages' that lack basic necessities such as water, electricity and public services including education and health. These communities suffer (more than Jewish communities) from environmental contaminants emitted by the Dimona nuclear facility, local industrial plants and the many garbage dumps in the area.

Once upon a time, they lived in the north of Palestine in two villages situated on a gently sloping volcanic outcrop on the southern edge of the al-Hule plain overlooking it to the north. They were settled Bedouins who cultivated land and relied on livestock for their daily living occasionally migrating in summer time to mountain areas escaping the heat of the valley. Their land was registered in the Ottoman and British mandate official books and they regularly paid taxes to the government in office.

Israel is getting out of the Gaza Strip to rid itself of a demographic and military nightmare. The Gaza disengagement plan, however, is not the only means of dealing with the demographic threat. The government recently pulled an old tool out of its arsenal – The Absentees' Property Law.

Update: Impact of the Wall on Refugees

The revised route for the separation Wall, approved by the Israeli cabinet on 20 February 2005, will continue to generate new displacement in the occupied West Bank. As of February 2005 approximately 209 km of the Wall had been completed. Once completed the Wall will be 670 km in length, more than twice the length of the 'Green Line'.

In February 2005 UN Secretary General Kofi Annan decided against extending the mandate of UNRWA Commissioner-General Peter Hansen. Hansen had served as head of UNRWA for nearly a decade. Many suspected that the decision was related to political pressure from pro-Israel advocates who have been campaigning against UNRWA and calling for the resettlement of Palestinian refugees. BADIL spoke to the Commissioner-General shortly after it was announced that the UN would be looking for a replacement for Hansen.

The Role of International Campaigns for Boycott, Divestment and Sanctions b

More and more people are drawing comparisons between Apartheid South Africa and Palestine/Israel. It is a key lesson of struggle that international isolation is expedited by effective internal mobilization and sustained people’s resistance campaigns.

Living Conditions of Palestine Refugees to be Restored to International Standards

UNRWA Medium Term Plan (excerpts)
An international consensus has emerged on the need for a planning framework to restore high standards of service and to create for Palestine refugees the conditions for self reliance and sustainable development.

A Letter from a Palestinian Refugee to Abu Mazen

The moment you took your first step to fulfill your duty as the chairman of the Palestine Liberation Organization (PLO) and as President of the Palestinian National Authority (PNA) you declared your committement to the Palestinian national principles: the right of the Palestinian refugees to return to their homes, the right of self-determination, and the right to establish an independent Palestinian state with Jerusalem as its capital. As you strive to achieve these objectives, starting by putting in order the 'Palestinian house' , I wish you the best of success on your difficult and long journey.

Who is responsible – the Jews or the Zionists?

An opinion survey conducted in 15 European Union countries by the European Commission showed nearly 60 percent of the questioners believed that Israel represented the greatest threat to world peace. This corresponds with the rising percentage of people around the world who reject and condemn Israel’s occupation, discrimination and gross violations of the legitimate rights of the Palestinian people.

Dr. Hisham Sharabi, Professor of History Emeritus and a founder and pillar of the Center for Contemporary Arab Studies at Georgetown University, died on 13 January 2005, at American University of Beirut Hospital at the age of 77, after months battling cancer. Dr. Sharabi was one of the most influential and prominent Arab intellectuals of the 20th century.

Hisham Sharabi was born in Jaffa, Palestine, in 1927. He attended the Ramallah Friends School and received his BA in Philosophy from American University of Beirut in 1947. He continued his education in the United States, earning from the University of Chicago an MA in Philosophy in 1949 and PhD in the History of Culture in 1953.

The 'Cairo Declaration' was issued by 13 Palestinian political factions after three days of meetings in Cairo, Egypt.

(1) Those gathered confirmed their adherence to Palestinian principles, without any neglect, and the right of the Palestinian people to resistance in order to end the occupation, establish a Palestinian state with full sovereignty with Jerusalem as its capital, and the guaranteeing of the right
of return of refugees to their homes and property.