An Indigenous Agenda for Human Rights and Democracy (Issue No.21, Spring 2004) 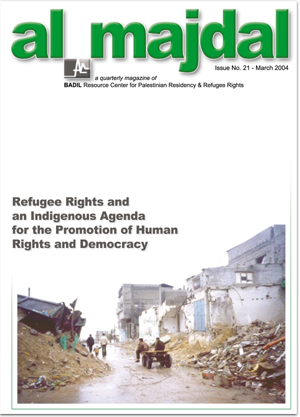 Now they want to impose democracy, reform and their view of the future on the Middle East as witnessed by recent pronouncements by the United States and Israel. Only an indigenous plan for regional reform, beginning with the issue of Palestinian refugees and including Palestinians in the planning process, will work says the latest issue of BADIL’s quarterly magazine Al-Majdal.

This idea is addressed in the summary report of the third BADIL Expert Seminar held in Cairo with the participation of UNRWA, UNHCR and the European Council for Refugees and Exiles (ECRE) and representatives of Palestinian/Arab human and refugee rights groups from Palestine, Lebanon, Syria and Egypt. The seminar focused on closing the gap from protection to lasting solutions to the Palestinian refugee issue. A feature article on past approaches to crafting durable solutions also draws conclusions about reform of the Middle East peacemaking process.

This issue also provides updates on Palestinian organizing and right-of-return initiatives, including refugee community workshops with Dr. Karma Nabulsi (Oxford University) about rebuilding Palestinian civil society structures and participation of refugees in exile, Palestinian responses to the Geneva Accord and a report on a joint Israeli-Palestinian conference in Haifa on the right of return and a just peace.

On protection and assistance to refugees, Al-Majdal reports on the impact of Israel’s separation/apartheid wall, renewed calls for restitution in Iraq and Libya, ongoing dispossession in the Negev and Israel’s massive destruction of refugee housing and livelihoods in Rafah, Gaza.

Editorial:Refugee Rights and an Indigenous Agenda for the Promotion of Human Rights and Democracy

Refugee rights and refugee participation are key elements of an indigenous agenda for the promotion of human rights and democratic reforms in the Middle East. An inclusive process that addresses protection concerns and simultaneously works to create the conditions in which Palestinian refugees and internally displaced may freely choose to exercise their right to return and repossess their homes and properties can enhance respect for human rights in the region and pave the way for broad democratic reforms in the Arab world and Israel.

Recent U.S. plans to promote political reform and democratization in the Middle East are widely perceived in the Arab world as the second round of an offensive launched after 11 September 2001 to reshape the political landscape of the region. The "Greater Middle East Initiative", apparently inspired by UN Arab Human Development Reports, was tentatively scheduled to be discussed and endorsed by members of the G-8, the EU, and NATO in June 2004. The plan for political, judicial, economic and social reform of Arab states has been met with widespread criticism.

"Enhancement of legislative and constitutional reform in Arab states, and closing the gap between national legislation and international standards and human rights laws in general and refugee rights in particular, will result in a more dignified life for Palestinian refugees under Arab patronage until they return to their lands” states the Palestinian Right-of-Return Coalition. The Coalition initiated a joint appeal to Arab states for respect of Palestinian refugees’ right of return and their right to physical and legal protection in the 1967 occupied Palestinian territories and in Arab host countries.

Closing the Gaps: from Protection to Durable Solutions for Palestinian Refugees

Report from the Third BADIL Expert Forum, 5-8 March 2004, Cairo
Hosted by the Al-Ahram Center for Strategic and Political Studies

More than 220,000 Palestinians, one-third of whom are registered refugees, have been affected by the first 123 km stretch of Israel’s separation/apartheid wall in the occupied West Bank. Limited access to goods, services, natural resources, market and job opportunities is causing further impoverishment. According to UNRWA, the construction of the wall around Jerusalem, now underway, will affect thousands more.

Refugees and the Arab Charter on Human Rights

Refugees and the Arab Charter on Human Rights

The Arab Charter on Human Rights was adopted in 1994, but as of March 2004, no member of the Arab League has ratified it. Recent efforts to re-draft the Charter to bring it in line with international human rights law provide an opportunity to strengthen regional provisions for refugee rights.

This summary was originally published in Arabic in Haq al-Awda (January 2004). To read the full version, see the BADIL website. The summary was drawn from more than 300 statements issued by individuals, institutions, and Palestinian national organizations.

The Haifa Initiative: Final Statement of the Organizers, ‘Right of Return and Just Peace’
1. Appeal from Palestinian & Arab Non-Governmental Organizations to the Arab Summit

The Arab Summit in Tunis is being held in an unclear and complex environment at international, regional and Arab levels. The Middle East is still suffering from the effects of the war on Iraq and its repercussions for the entire Arab world. In the course of the war itself, the American administration introduced its concept of a “Greater Middle East” aimed at exporting its ‘democracy’ to the Arab countries in the region. Ironically, the United States considers waging war and occupying Iraq as a basic first step on the road to this promised democracy.