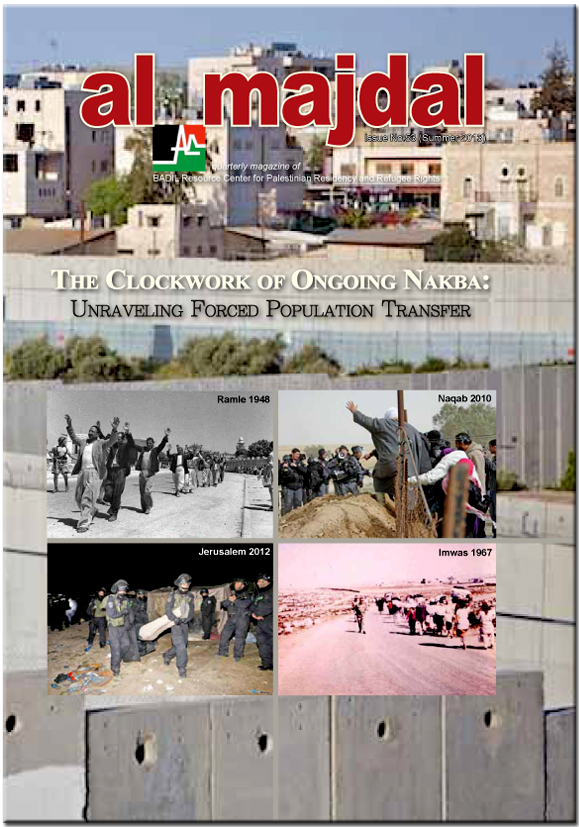 BADIL Resource Center for Palestinian Residency and Refugee Rights is happy to present to you this 53rd Issue of Al-Majdal. This installment of al-Majdal is intended to provide primary sources, extracts and analysis from BADIL’s forced population transfer conference, held in June, as well as a roundup of the major components of our emerging work on forced population transfer.

6.8 million Palestinian refugees and counting… Towards a popular strategy for resisting forcible displacement*

The central issue to the Palestinian-Israeli conflict continues to be the mass displacement of Palestinians. The creation of refugees, currently 6.8 million, as well as creation of internally displaced persons, more than 600,000 on both sides of the Green Line, and refusing their right of reparation including their Right of Return is the main component of the ongoing Nakba. The violent uprooting of Palestinians from their homeland was waged in an evolving way from 1947 to the present. al-Majdal’s 53rd issue seeks to highlight this continuous crime. Our feature section profiles material presented in BADIL’s 4 June 2013 Conference on Forced Population Transfer, a preliminary response at coordinating a comprehensive defense against forcible displacement. The Clockwork of Ongoing Nakba: Unraveling Forced Population Transfer is intended to provide primary sources, extracts from BADIL’s conference and legal analysis – a roundup of the major components of our emerging work.

Zionist Apartheid: a Crime Against Humanity

In 1973, the United Nations rightly condemned “the unholy alliance between Portuguese colonialism, South African racism, Zionism and Israeli imperialism.” Only two years later, it determined “that Zionism is a form of racism and racial discrimination.” At the behest of the U.S. administration, this resolution was revoked in 1991 in order to pave the way for the Madrid Peace Conference that same year; however, equating of Zionism with racism is still valid.

Lifta and Battir: Parallel Cases of Ongoing Nakba in the Jerusalem District

"Everyday we live through there is a new massacre, there is steadfastness and there are people displaced from their lands. The Nakba and everything that Israel puts on us is an ongoing process..."

The practices of population transfer, including the implantation of settlers and settlements with the effect or purpose of demographic manipulation, qualify as war crimes and crimes against humanity in modern international law.[1]Two centuries of legal prohibitions and eventual criminalization of population transfer have developed along two converging tracks. The first derives from the rights and sovereign claims of states vis-à-vis other states, establishing the unacceptability of the acquisition of territory by military force or other means. The belated second doctrine derives from states’ obligations to respect, protection and fulfillment of human rights, including during times of conflict, occupation and war. Population transfer violates the full range of individual rights, as well as collective rights, among which is the inalienable right to self-determination. Human Rights and International Humanitarian Law (IHL) theoretically protect these values, particularly for the most-likely subjects of population transfer: civilians in wartime, people under occupation and indigenous peoples.[2]

Forced Population Transfer: the Role and Strategy of the Palestinian Authority

My presentation focuses on the forcible displacement of Palestinian pastoral communities from Area C of the West Bank. Making up 50,000 inhabitants who live in approximately 150 communities, they are under constant threat of displacement by the Israeli occupation. The presentation also addresses the Palestinian Authority’s vision, its role in practice and its expectations from the international community.

Does the passing of time affect the rights of displaced people wishing to return to their property? Is there a difference between those returning the day, or a week, after a forcible eviction and those who still seek to return after many years?  If so, how does this impact the rights of Palestinian refugees? These were the questions running through my mind as I reviewed the material collected from case studies across the world and over the history of forced displacement during the past sixty years.[1] The answer to all three questions, it seems, is both yes and no. This study examines nine cases of reparations to refugees and displaced people and concludes that while many rights endure, over time new rights also emerge which complicate a resolution of forcible eviction.[2]

Witnesses to Displacement Beit Safafa: a dissection of a village, the destruction of life

Summary of interview with Alaa Salman, a resident of Beit Safafa - by Halimah Al Ubeidiya and Wassim Ghantous

In the past year, BADIL has conducted more than 60 interviews with Palestinian victims of Israeli forcible displacement. These interviews were an essential part of the legal handbookpublished earlier this year, and for which we dedicate this issue of al-Majdal. In this section of the magazine, we bring you summaries of two compelling stories of displacement and resistance. We hope these interviews shed light on the human dimensions of forced population transfer, an issue more often described in dry and distanced legal language.

Summary of interview with Nasser Nawaja’a, a resident of Susya - by Halimah Al Ubeidiya and Wassim Ghantous

In the past year, BADIL has conducted more than 60 interviews with Palestinian victims of Israeli forcible displacement. These interviews were an essential part of the handbookpublished earlier this year, and for which we dedicate this issue of al-Majdal. In this section of the magazine, we bring you summaries of two compelling stories of displacement and resistance. We hope these interviews shed light on the human dimensions of forced population transfer, an issue more often described in dry and distanced legal language.

Affecting more Palestinians than any single military operation could, displacement is the biggest threat to Palestinian life today. In the past year alone, Israel displaced thousands of Palestinians in Jerusalem, West Bank Area C and the Gaza Strip Buffer Zone. In May, Israel approved the Prawer Plan that threatens to forcibly displace up to 70,000 Palestinian Bedouins in the Naqab.