The Struggle for Palestinian Rights: New Strategies in a Changing Middle East (Issue No.46, Summer 2011) 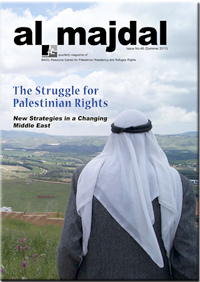 This issue of Al Majdal takes a look at the new strategies emerging in the struggle for Palestinian rights in light of the Arab Spring and the all but declared death of peace negotiations.

In his article on the global and transnational efforts at Palestinian self-organization, Omar Shweiki reports on the burgeoning campaign for direct elections to the Palestinian National Council, the highest legislative body of the Palestinian people, which has ceased to function since the advent of the peace process in the early 1990s. He looks at the Civitas mobilization between 2002-2006 and explains the background to the current campaign demanding representation for Palestinians everywhere. Wisam Saliby provides a history of BDS in the Arab world and its potential in the context of the 2011 uprisings.

BADIL's staff present interviews conducted with Palestinian youth who marched to Palestine’s borders on Nakba Day 2011. BADIL’s Legal Advocacy Consultant writes about the role and work of the Special Rapporteur for Human Rights to the OPT, Richard Falk and Simone O'Broin brings readers up to speed with developments related to the Goldstone report as it comes up for discussion to the UN General Assembly in September. Also included in this issue is an update on the BADIL-Zochrot project which discusses practical aspects of refugee return. 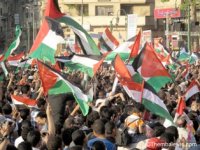 Towards a Comprehensive Rights-Based Strategy

The sea change disrupting the repressive status quo of authoritarian regimes throughout the Arab world seemingly slows into a calm wave on the shores of Palestine. While significant events, including the intersubjective acceptance of the peace process’s failure, and the unprecedented popular marches onto Israel proper’s borders, have marked development, these events have done little to halt the ongoing displacement and dispossession experienced by the Palestinian people. Nevertheless, mounting victories in the name of self-determination, democracy, freedom, and dignity throughout the Arab world provide hope to Palestinians and their allies as they enter a new phase after two decades of a failed peace process.

Professor Falk at the UN

The Human Rights Council’s (HRC) most recent session came to a close in mid-June 2011, thus marking the 17th session of the Council since its establishment in March 2006. The Human Rights Council supplanted the Commission on Human Rights, which was established as a subsidiary organ of the Economic and Social Council in 1947 but disregarded as ineffective and too politicized by the time it was replaced in 2006.

The Human Rights Council has faced similar criticisms of politicization, primarily from the United States and Israel, since it commissioned the Fact-Finding Mission to Gaza in 2009.1 Although attacks on the Council may have abated since it voted to move the “Goldstone Report” out of Geneva and back to the UN General Assembly where it can be underpinned by actionable follow-up, the Special Rapporteur to the Occupied Palestinian Territory (oPt) continues to be a target for attack.

The Goldstone Report: the Lack of International Accountability Continues

The Goldstone report1 was published in September 2009; the result of a fact-finding mission by four senior jurists to investigate violations of international humanitarian law and international human rights law during “Operation Cast Lead” in Gaza in December 2008 to January 2009. Its conclusions were that Israel had committed war crimes and possibly crimes against humanity2 and recommended that the situation be referred to the International Criminal Court (ICC) for judicial examination.3 The report’s progress to date in the arena of the Human Rights Council (HRC) was covered in our last update. 4 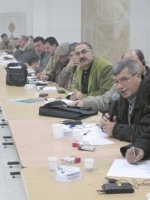 ‘The People Want!’ On the campaign for direct elections to the Palestinian National Council

In the midst of a wave of commentators, analysts and politicians trying to keep up with, control, and define the movement of revolution now unfolding termed the ‘Arab Spring’, one popular demand has risen above them all, in a single voice. Breathtaking in its clarity, the sentiment is captured by the single refrain heard from Yemen to Libya, from Egypt to Bahrain: ‘The people want!’ The determination of citizens to come together in order to take control of their own destinies has been reaching its full expression at every level of society across the Arab world, from the ousting of dictatorial leaderships, to the formation of popular committees in order to meet basic local needs such as cleaning the streets and managing local security. In all these achievements, the people have been driven by the will to take back ownership of everything from their local neighbourhoods to the national institutions of the state itself.

BDS in the Arab World in light of the recent Uprisings

Since the outbreak of uprisings across the Arab world, analysts of the region have sought to predict how the decisive events will impact on the continuing struggle for Palestinian rights. Whereas much attention continues to be paid to the potential changes in governments' policy and the intricacies of the stagnant peace process, less coverage has been given to the contributions made by ordinary Arabs across the region to end their governments' role in supporting the Israeli regime.

The revolutionary spirit of the Arab Spring manifested itself in the actions of Palestinians, Arabs, and their allies on this Nakba Day 2011. Alongside the usual annual gatherings marking the Palestinian Nakba of 1948, Palestinian, Syrian, Egyptian, Jordanian and Lebanese activists made unprecedented strides in their quest to claim the right of return for refugees to their places of origin inside historic Palestine and the occupied Golan Heights.1

A report from the BADIL-Zochrot joint actions

As the May 15th marches reaffirmed the refugees at the center of the Palestinian struggle and revealed new avenues for the realization of their rights, questions related to practical aspects of refugee return are becoming of increasing significance. Over the past two years, BADIL and Zochrot have been involved in an innovative project to study the practical aspects of refugee return. The project builds on the deep respect in international law for the right of return,1 and its widespread affirmation as the only acceptable durable solution, and starts to address how refugees will return to properties and homes from which they were forcibly displaced, and how such a return can be implemented in a practical, fair, and efficient manner that protects the legitimate interests of all stakeholders involved.

Signatories to “Irish artists pledge to Boycott Israel” reaches 200
13th January 2011 – Irish singer-songwriter Dylan Walsh has become the landmark 200th signatory to the “Irish artists pledge to Boycott Israel”. The pledge, launched in August 2010, commits endorsers to not “avail of any invitation to perform or exhibit in Israel, nor to accept any funding from any institution linked to the government of Israel, until such time as Israel complies with international law and universal principles of human rights”. It has garnered the support of many high profile Irish creative and performing artists such as Stephen Rea, Sinéad Cusack, Christy Moore, Donal Lunny, Andy Irvine, Damien Dempsey, Neilí Conroy, Conor Kostick, Liam Ó Maonlaí, Sharon Shannon, Robert Ballagh and Nuala Ní Dhomhnaill.