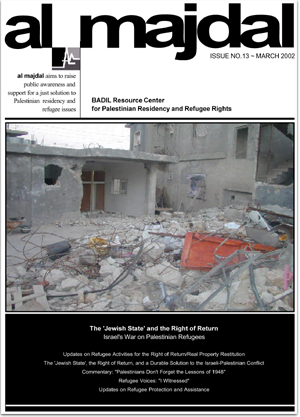 Issue No. 13 of al-Majdal covers the period of January-March 2002. It reports about events and developments that led up to Israel's current all-out military attack against the Palestinian people, the so-called "Operation Defense Wall, launched on 29 March. It does, however, not cover Israel's March-April operation itself. The latter, including assessment of its impact and perspectives for the continuing struggle of the Palestinian people and its refugees for freedom, justice and peace, will be featured in the June
issue of al-Majdal. 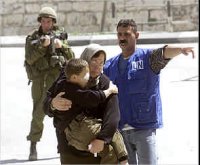 The'Jewish State' and the Right of Return

Over the course of the past three months (January-March 2002) Israel’s military and political establishment inflicted unprecedented damage and destruction in the 1967 occupied territories in an effort to crush Palestinian resistance to Israel’s illegal 35-year military occupation and more than 50-year denial of Palestinian refugee rights.

Since the beginning of the year Israeli military forces and settlers have killed more than 350 Palestinians, an increase of 80 percent from the previous three-month period, representing the highest three-month death toll since the beginning of the al-Aqsa intifada in late September 2000. More than a year ago following the collapse of final status negotiations at Camp David (July 2000) and Taba (January 2001) numerous Israeli commentators and political figures stated that violent confrontation, including war, was preferable to accepting the right of Palestinian refugees to return to their places of origin inside Israel. Events on the ground indicate that these statements were not simply empty talk. Israel continues to expand the use of lethal weapons against the Palestinian civilian population and increase the severity of its military attacks. This included a sustained three-week campaign in March that targeted Palestinian refugee camps throughout the 1967 occupied territories.

By the end of March 2002 Israeli Prime Minister Ariel Sharon, under the pretext of fighting Palestinian suicide bombings, had declared that Palestinian President Yasser Arafat was an enemy of Israel and that Israel was in a state of war. Israel’s latest military assault that began in late March with the total re-occupation of Ramallah and ‘isolation’ of President Arafat, despite internal intelligence reports that there is a direct correlation between Israel’s military campaigns and a decrease in security inside Israel, strongly suggests that the underlying aim of the Sharon government is to impose a settlement on the Palestinian people through military force and thereby avoid a comprehensive peace agreement based on international law and UN resolutions.

The 'Jewish State', the Right of Return and a Durable Solution to the

From the beginning of the Madrid/Oslo process in the early 1990s until its collapse at the end of the decade few political figures, analysts and journalists delved into the implication of Israel’s definition of itself as a ‘Jewish state’ for a comprehensive and durable solution to the Israeli-Palestinian conflict. After all, in the minds of those who crafted the political process that has occupied world leaders for the past ten years, Oslo was to lead to a ‘historical reconciliation’ between the Palestinians and the Jewish state. Oslo was to lead to what is referred to as ‘normalization’ or normal relations.

Global Right of Return Coalition Calls for Arab Unity on the Right of Return: In late March, more than two dozen grassroots Palestinian refugee initiatives in Palestine, Arab host countries and in various countries of the diaspora issued a joint open-letter to states attending the Arab Summit in Beirut. The letter called for Arab unity on the principle of the unity of land and people and the right of return, implementation of international protection for the Palestinian people, including refugees, until they are able to return to their homes, villages and property, and declared support for the intifada.

The first three months of 2002 witnessed another dramatic deterioration in human security in the 1967 occupied Palestinian territories due to the escalation of Israel’s military campaign to crush Palestinian resistance and silence those calling for a comprehensive and durable solution to the conflict based on international law and UN resolutions. Destruction of lives and property reached an as yet unprecedented level during the past three months. The deterioration in human security in the refugee community, particularly those refugees living in camps, was especially dramatic due to Israel’s massive military assault on the camps in the West Bank and Gaza Strip in late February and early March.

Over the last three months (January – March 2002) the escalation of Israel’s military campaign against the Palestinian people, including Palestinian refugees, exacted a heavy demand on UNRWA services. During this period refugee camps in the 1967 occupied Palestinian territories came under even more direct assault by Israeli forces resulting in a dramatic increase in deaths and injuries among refugees and UN staff as well as heavy damage to refugee shelters and UN installations in the refugee camps. Israel’s military assault on Palestinian refugee camps in March resulted in damage to 22 UNRWA schools, four health clinics, two ambulances and four camp service centers in addition to roads, alleyways and other infrastructure in the camps.

Update on Ariel Sharon: In early March a Belgian Court of Appeals agreed to a request submitted by lawyers for the survivors of the Sabra and Shatila massacre to reopen the legal debate concerning the admissibility of the case against Ariel Sharon for war crimes, crimes against humanity and genocide and Belgium’s competence to judge the case under the principle of Universal Jurisdiction. The legal team submitted the request in late February following a ruling earlier in the month by the International Court of Justice (ICJ) that a Belgian arrest warrant for the acting Foreign Minister of the Democratic Republic of Congo violated international law because it failed to respect the Minister’s “immunity from criminal jurisdiction.”

“Though she has never seen Hebron, young Ola Abass can imagine what its moon must look like. Huddling around a space heater with her sister, mother, and 18 other women at Rashidieh refugee camp, [9 year old] Ola is spending this cold winter morning embroidering the blue Hebron moon onto squares.”
"In spite of the bad situation we're living in, we create embroidery and send it all over the world,” says [Aidia Gadban, one of the women in the embroidery group]. "We just want the right to life, the right to return, and like embroidery we have to hold onto that from one generation to the next."

I have witnessed with my own eyes the decline of human beings into savage beasts…
I am a son of a refugee, living in ‘Aida refugee camp…
Aida, a tragic operation, but this time written not by Verdi, but by the Israeli occupation…
An opera, where the Israeli offense army plays music that changes rhythm and force every day and every hour…
The machineguns, automatic guns – light or heavy – an entrée, then a main dish of F-16 s and Apache helicopters with some spices from the tanks all around…
And finally, the dessert, blood and tears of the victims ripped and spread at every corner of the streets…

1. Complete text of the EU’s ‘non-paper’, section 3 (Refugees)
"Non-papers were exchanged, which were regarded as a good basis for the talks. Both sides stated that the issue of the Palestinian refugees is central to the Israeli-Palestinian relations and that a comprehensive and just solution is essential to creating a lasting and morally scrupulous peace. Both sides agreed to adopt the principles and references which could facilitate the adoption of an agreement.
Both sides suggested, as a basis, that the parties should agree that a just settlement of the refugee problem in accordance with the UN Security Council Resolution 242 must lead to the implementation of UN General Assembly Resolution 194.

List of 91 Palestinian victims of Israeli violence between 1 January and 28 February 2002. Due to Israel’s military siege of Palestinian cities, towns, villages and refugee camps for most of the month of March and the severe humanitarian and political crisis names of Palestinians killed after 28 February were not available at press time. In total, 357 Palestinians were killed between 1 January and 27 March 2002. 17 of those killed were age 18 and under. Between 29 September 2000 and 26 March 2002, 1,297 Palestinians, including 16 inside Israel have been killed by Israeli security forces of whom 237 were below the age of 18.