A LITTLE INNOVATION: Overcoming the obstacles to recording history in the Galilee 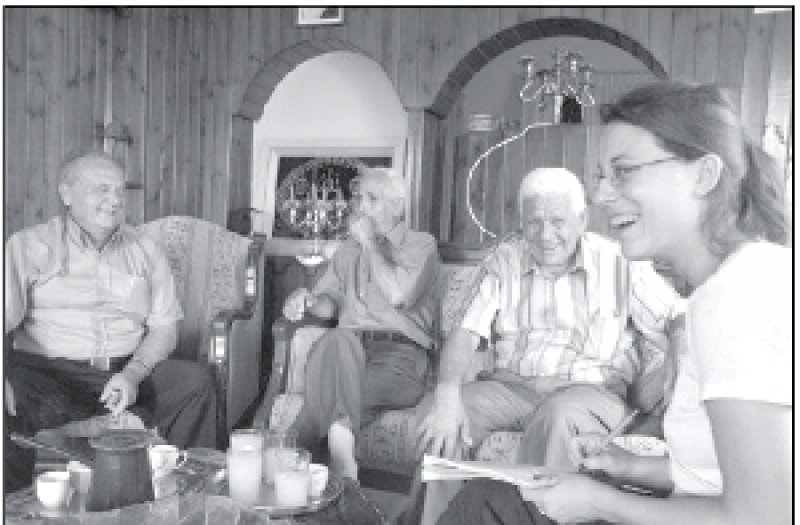 Q: You have met families from ‘nearly every village’. How did you get to meet them all?

A: Simple: I just placed photos of the villages in the newspaper, and then my telephone didn’t stop ringing…

Interview with Jamil Arafat, a Palestinian historian who has been working in the field of oral history and wider history collection ‘since before Israel started’ and senior tour guide for ADRID’s trips to destroyed villages.

This is a story of silences - and ending the silence. When we went to meet Jamil Arafat, a Galilee based historian, I intended to document his use of oral history methodology in constructing histories of destroyed villages. However, what came through as the most important message to convey was not his invaluable contribution to documenting oral history testimony, but the struggle he, and other activists of the Nakba generation, went through to even reach the stage of being able to record oral history. Understanding the lengths that Israel went to, to prevent the retelling of Palestinian history, highlights firstly the often overlooked oppression of internal refugees and Palestinians remaining inside the new Israeli borders of 1948, and secondly, the value that Israel correctly recognized in the preservation of history in holding together community roots. It is precisely for this reason that the state attempted so hard to crush it.

Born in 1933 in the village of Mashad, Jamil Arafat remains there today. While not himself a refugee, it is clear that he sees no separation between himself as a dispossessed Palestinian in his homeland, and those who literally had homes taken from under them. Mashad is a small village situated between the villages of Kafr Kanna and al-Rayneh, all in the vicinity of Nazareth, the largest remaining Palestinian town inside Israel. At age 15, at the time of the Nakba, a young Arafat attended school in Nazareth and saw with his own eyes the poverty and suffering of internal refugees. Researcher Charles Kamen estimates that in 1948 over 5000 refugees were sheltering in Nazareth, and more than 7000 in the surrounding villages.

Arafat’s interest in gathering history predates the state. In the fourth grade at school, he had a Jordanian teacher who inspired his love of history from that day on. So during the days of the Mandate, born at a time of historic Palestinian resistance against the British, the young school boy started to observe history in the making around him.

While activists know of the iron Israeli control through military occupation in the West Bank and Gaza today, many are not aware that for two decades, Israel kept its Palestinian ‘citizens’ – Israeli passport holders – under strict military rule. Developed from the 1945 British emergency laws, Israel implemented military law from 1948-1966 only for its Arab citizens, forbidding movement beyond certain zones, requiring work permits and employing strict control over political activity.

After the dispossession of 1948 and destruction of the Palestinian economy, many families could no longer afford to send their children to school. Arafat however was lucky to be able to continue to study in down town Nazareth, thus witnessing daily the overcrowding of refugees in convents, halls and in shacks assembled in the old British army barracks in the centre of town. After graduating, he became a teacher himself – among other subjects teaching history. However, as remains the case today, Palestinian history is excluded from the curriculum. Teachers were vetted through the security system and prevented from being employed with any security record. Any teacher attempting to defy these boundaries would lose their job.

Systematic recording of interviews within the internal Palestinian community this time would have been stopped before the project even started. If you go to a library to try and find out more about 1948 Palestinians – aside from the work of Zionist journalists and sociologists – you will not find anything predating the landmark work of Sabri Jiryis and Fawzi al-Azmar in the 1970s, three decades after the dispossession.

With such strict measures in place, many would be too afraid to continue – but for Jamil Arafat this meant the development of innovative strategies to pursue his aim of recording and raising awareness of Palestinian history - without having the law put a stop to it. If he couldn’t write about the history of the people of the Galilee, he would write a book detailing nature trails in the Galilee and the Golan.

So in 1968, the first of many books was published – co-authored – on the hiking trails in the Galilee and the Golan. ‘And it was from this point that I started to collect information about people and villages more seriously’.

Words are dangerous – so he decided to focus simply on inserting photographs in local newspapers – ‘lots of pictures, very little text – nobody was supposed to speak at this time’. As a Galilee history teacher, and respected deputy headteacher, thus personally vetted by the Education Ministry – he submitted and had work published in a Ministry educational magazine. ‘They asked me to write a historical article about Saffuriyya, but they had no idea which direction I would take it – I focused on the living characters of the village.’ After the article was published he received a call from the (Jewish) head of the Arab Education Department.

‘And it was from then that I felt like I was being watched’. But this didn’t stop him accepting an invitation to write for local Arab newspapers, or attempting to photograph what remained of Palestinian villages. ‘This is years before Walid Khalidi’s All that Remains, or Benny Morris’s research. Although I knew from my interviews where villages were, we didn’t have the information widely available like it is today. Nobody had made public attempts to ascertain exactly how many there were.’ On several occasions he was detained or chased off sites which were supposedly ‘closed military zones’, although this was long after the end of the official reign of the military government.

Mention of the Boy Scout Movement does not immediately bring a revolutionary image to mind. However it was working as a leader with his local scout group that Arafat could start to bring history to a new generation – ‘although at this date some of them even remembered it’. Naturally forbidden to invite refugees to speak officially to the group, he still succeeded in organizing regular trips for the boys to destroyed villages. ‘For sure we would have been forbidden to organize proper educational tours to the villages, so we used to go out for leisure trips walking or swimming. And then we would happen to pass by a village which I could point out…’

When he finally began to record oral history testimony, Jamil Arafat was still years ahead of the establishment of village heritage committees or the recently established Jewish movement Zochrot, who today are working on creating an important oral history archive.

And how did he meet those he interviewed? He was quite simply overwhelmed by callers responding to a regular feature he began to publish in the communist newspaper al-Ittihad. Strengthened by its links with Israeli Jewish communists, it was harder for the government to ban all Communist party activity. For decades, the Communist Party and its affiliated projects were the only forum permitted for what little Arab political expression was allowed. In the 1970s, starting a regular section entitled Thikriat al-Watan (Memories of the homeland), in al-Ittihad , Arafat’s documentation of a Palestine lost started to reach a large number of readers.

‘People would see the photos in the newspaper and know that I was gathering information. They would call to share their photos and memories – they had so many things they wanted to tell about what they had lost’. People had been waiting decades to talk…

Isabelle Humphries is conducting doctoral research focused on the experience of the Palestinian internal refugee community in the Galilee. Contact: This email address is being protected from spambots. You need JavaScript enabled to view it.

More in this category: « Oral Histories: Gathering Intimate Views of Multiple Pasts Always in Dialogue with the Present Oral History in the Palestinian and Sahrawi Contexts: A Comparative Approach[ »
back to top