Empowerment at the Site of Memory 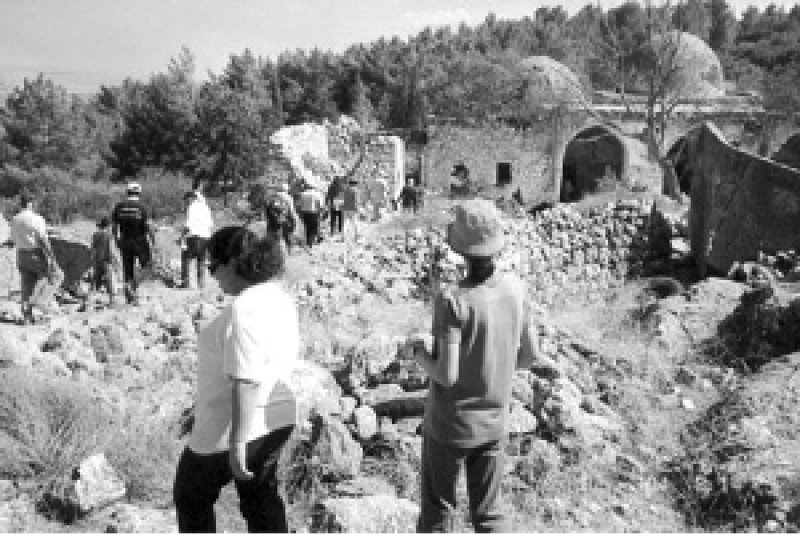 History is a question of power in the present, and not of detached reflection upon the past. It can serve to maintain power, or can become a vehicle for empowerment.(1)

My translator paused “He’s going too fast”, she said looking frustrated out of the tour bus window, “I can’t follow the stories he is telling.” Even with my limited Arabic I was following the guide better than she was. Rawda, as a Palestinian educated under the Israeli dictated curriculum for Arab schools, had never studied Palestinian history, excluded from the Israeli curriculum.(2)

As scenes of battles and massacres from the 1936-39 uprising and the Nakba of 1948 came floating past the bus window, the guide speaking excitedly through the microphone tried to bring the events alive for those staring eagerly out the window. Some of the older generation knew the stories, but many younger people had never learned these tales and folklore at school, nor would their parents have been taught them to be able to pass on.

The Israeli educational curriculum for Arab citizens plays a central role in denial of Palestinian history and identity. Umm Muhammad, an internal refugee (IDP) from Haifa, tells of her days as a school teacher in Nazareth. On Israeli ‘Independence Day’, she and her colleagues would have to raise the Israeli flag; ‘If the flag fell we would be interrogated as to why. We were slaves without thinking’. Teachers and children were required to sing the Ha’Tikva, the Zionist national anthem. Arab children are taught a curriculum which explicitly denies their Palestinian identity, and the state keeps watch to ensure that Arab schools fulfill this role. The political activity of Palestinian teachers both in the classroom and out of hours has always been strictly monitored. Teachers have been denied employment or fired for ‘security’ reasons.

Visits to the physical lieux de memoire of Palestinian dispossession function as an education that Palestinian schooling in Israel not only does not provide, but specifically excludes. Israel is fully aware of the potential function and power of history, its own education system playing a prominent role in socializing Jewish children into national traditions, an essential process for an immigrant settler nation. Palestinian students must follow the Israeli curriculum and the Israeli narrative of history, just as many indigenous minorities across the world are required to do. In her study of people native to the Columbian Andes, Joanne Rappaport notes how European settler myths have been used as tools of domination denying people ‘access to a knowledge of their own past so necessary for organizing in the present’, a pattern replicated across the colonial world.(3)

The separation of Palestinians from their own culture and history is perhaps at its widest in the part of the community remaining inside Israel. Under the UNWRA education system Palestinian children are educated in the knowledge of Palestinian history and the national narrative. In the wider Diaspora pupils at least have access to Palestinian history, even if not specifically taught in school. Although Palestinians inside Israel are taught segregated from Jewish pupils, the curriculum is dictated by the state. In going to the site of memory, the landscape can act as a stimulus for the community to engage in the history and national memory denied at school, a counter-memory to the Israeli master narrative.

Rawda and I were part of a tour group organized by ADRID to the destroyed villages of the other half of Gaza, the part of the British mandate district occupied in 1948 (today inside the Green Line, not part of the Gaza Strip). Day trips are ADRID’s primary community based activity, taking around fifty people of a mixed generational group to villages and other sites given significance in the Palestinian narrative. Individual village committees, other NGOs and political parties have also organized similar visits, often on specific memorial days such as Land Day or Nakba Day. While some excursions are designed for the community themselves, other events are aimed at showing the Palestinian alternative narrative to others; foreign delegations, media, or interested Israelis.

Inclusion in the narrative

Reclaiming this history helps Palestinians to position themselves in the wider narrative from which they have been excluded by Israel, their own fears and geographic circumstances, and at times by the external community. Palestinians inside Israel face a clash of narratives; they cannot sit comfortably within either the Israeli or Palestinian national story. As Israeli citizens, links with Palestinian roots are denied, yet even though the stones of history remain beneath their feet, the 1948 Palestinians have also been marginalized within the Palestinian national narrative.

Activity at the site of memory gives an opportunity to feel included once more in the wider Palestinian narrative; ‘revalidating their own historical knowledge as an arm against their subordinate position in society’.(4) On reaching one village, one man in his 60s grabbed my arm excitedly to tell me that this was the village of Sheikh Ahmad Yassin, killed only a few months previously.(5) At the site of memory, internal refugees not only feel a connection with the past, but with the wider community and struggle from which they have been severed since 1948.

The increase in public activity at the site of destroyed villages has not only strengthened external links, but also bonds within the internally displaced community whose struggle has often been fragmented into individual village campaigns. The move towards public communal activities with the participation of refugees of different villages, other Palestinian members of the community and even certain members of the Jewish majority (for example groups like Zochrot) has once more reaffirmed the importance of the refugee issue inside as well as outside the 1948 border.

While internal refugees are those who actually lost the home above their head, many aspects of their experience and memory of the Nakba are shared with the wider Palestinian population remaining within the Jewish state. Together they faced the uncertainty of the future; together they faced the same punishment for involvement in political activity, for raising any kind of awareness of the injustice of the Nakba. Many Palestinians not considered as refugees also lost lands in 1948, and in the confiscation that continues to this day. Although commemoration and protest activities at the villages are primarily led and organized by refugees themselves, many 'non-refugees' are active in this struggle alongside them. Hanan from Judeide-Maker is an 18 year old student and a regular participant in ADRID’s tours; 'I came because my brother told me about these trips and it sounded interesting. I then brought my cousin along who is an internal refugee. This history is important for me too'.

As part of the 6th Mediterranean Social and Political Research Meeting held annually by the European University Institute of Florence, Dr. Lila Abu-Lughod (Columbia, USA) and Dr. Ahmad Sa’di (Ben-Gurion, Israel) convened a workshop to explore aspects of memory and commemoration across Palestine and the Diaspora. The Meeting is the largest European gathering of social scientists from Europe, the Middle East and North Africa, and the inclusion of the workshop reflects an increasing acceptance of discussion of the Nakba within mainstream academic discourse. The article is an edited extract from one paper concerning commemoration by internally displaced Palestinian refugees at the site of destroyed villages.

Isabelle Humphries (St Mary’s College, University of Surrey, UK) is conducting PhD research on the narrative of the internal refugee community in Nazareth. For full copy of paper contact: This email address is being protected from spambots. You need JavaScript enabled to view it.

More in this category: « Museum: Overcoming the Nakba through its Preservation A Second Call for a 'Race Against Time »
back to top