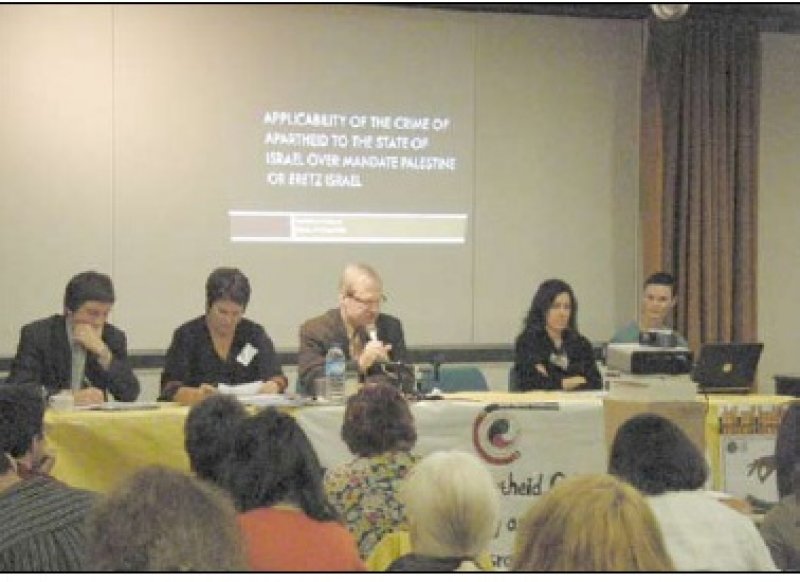 For many civil society actors involved in struggles against racial discrimination, the 2001 World Conference against Racism in Durban, South Africa seemed to be a turning point. Blacks, Dalits, Indigenous nations of the Americas, Roma, Palestinians, and other racialized communities carried each others’ banners and took up each others’ cries for a world without racism and apartheid. There was ample reason to hope that global civil society had achieved a victory in the quest for redress after centuries of racist oppression.

The civil society consensus emerging from Durban crystallized around a set of clear demands: vapid verbal condemnations of racism were not sufficient; perpetrators and benefactor states of racism and colonialism needed to make structural changes and pay reparations for their actions in accordance with international law.

But the states implicated were not interested in taking any meaningful responsibility. They responded with a Zionist-led offensive that used the groundswell of support for the Palestinian cause to smear the conference as an “anti-Semitic hate-fest.” This phrase was picked up and disseminated by Western states and their corporate media machines, attempting to turn Durban into a four letter word. Two days after the conference, the 9/11 attacks in the United States took place, and the world’s attention shifted to the “war on terror.” Any attempt to challenge the powerful myth-making about the Durban Conference became futile.

In addition to increasing U.S. and Israeli impunity, the years that followed the Durban Conference were marked by growing international solidarity with the Palestinian struggle. This globalization of this solidarity with the Palestinian cause developed increasingly sophisticated networks and strategies, within the framework of the 2005 Palestinian civil society call for boycotts, divestment and sanctions (BDS) on Israel until it complies with international law. A prominent feature of the BDS campaign is its role in connecting local community struggles against oppression in different parts of the world with the movement against Israel’s apartheid regime.

Many activists hoped that another World Conference Against Racism scheduled to take place in Geneva in April 2009 – the Durban Review Conference (DRC) - would provide the forum for organizing and advancing upon the work done during and since the first conference. But Israel and its Western allies responded by working diplomatically to mobilize a state-level boycott of the DRC, which was eventually heeded by ten states including the U.S. and Canada. The opening speech by the Iranian president was the excuse for most of the remaining E.U. states to stage a noisy walkout as soon as he said the word “Israel.” UN organizers banned side events pertaining to the Palestinian struggle. References to any specific victims of racism in the discussions and outcome documents were also removed. The result was a conference against racism in which racism was discussed as an abstract concept, one that exists outside of time and space, beyond the realm of perpetrator, victim, law and accountability.

In an attempt to partially counteract this predictable outcome, the Palestinian BDS National Committee, together with several international allies, organized the Israel Review Conference in the lead-up to the DRC. Also convened in Geneva, it brought together over three hundred people from five continents, including human rights activists and experts from South Africa, Malaysia and several European and Middle Eastern countries. The first day of the conference included two expert panels that explored the applicability of the crime of apartheid to the state of Israel, and explained legal mechanisms and strategies for making Israel and other parties accountable to their obligations under international law.

Participants developed practical recommendations on the second day in workshops. These covered the joint struggle of victims of racism for justice and equality; a global campaign against the Jewish National Fund (JNF) – a major agency of Israel’s racial discrimination and colonization; popular initiatives for promoting prosecution of war crimes and crimes against humanity; and the growing global movement for BDS against Israel until it complies with international law. Among the successes of the Israel Review Conference was that it brought together lawyers, legal experts and community-based activists in an attempt to bridge the gap between law and politics in the struggle to hold Israel accountable for its crimes.

Israel has largely succeeded in evading accountability for its violations. This, however, has not stopped attempts to use the courtroom as a means of attaining justice for Palestinians. It is important to learn from the experiences of the past and coordinate action for the future in order to increase chances for success.

This issue of al-Majdal draws on the research and experience of the participants in the Israel Review Conference, and the topics on which they focused to provide an overview of routes, challenges, and recommendations for “Litigating Palestine.” They evaluate past attempts at taking Israel and its abettors to court, assess the role of law in attaining justice for victims and retribution from perpetrators, and – perhaps of particular interest to non-lawyers – the role of civil society in supporting legal battles to attain justice for Palestinians.

As this issue goes to print, news is circulating about the change in Spanish universal jurisdiction laws as a direct attempt to protect Israeli war crime suspects from prosecution. Meanwhile, there is an ongoing legal challenge to Heidelberg Cement for its plunder of quarries in the occupied West Bank, and a German-EU challenge to European imports from Ma’ale Adumim’s Soda-Club. The UK has announced a partial arms embargo on Israel that coincides with a lawsuit challenging the U.K. government for its failure to fulfill its obligations under international law with respect to Israel’s activities in the Occupied Palestinian Territory.

All these efforts and many more attest to how the courtroom is one of many fronts in the struggle for justice for Palestine. We can only hope that the articles and analysis shared in this issue contribute to the struggle to hold the perpetrators of racism accountable for their crimes.

More in this category: Israel’s Para-state Institutions Operating in the United States »
back to top