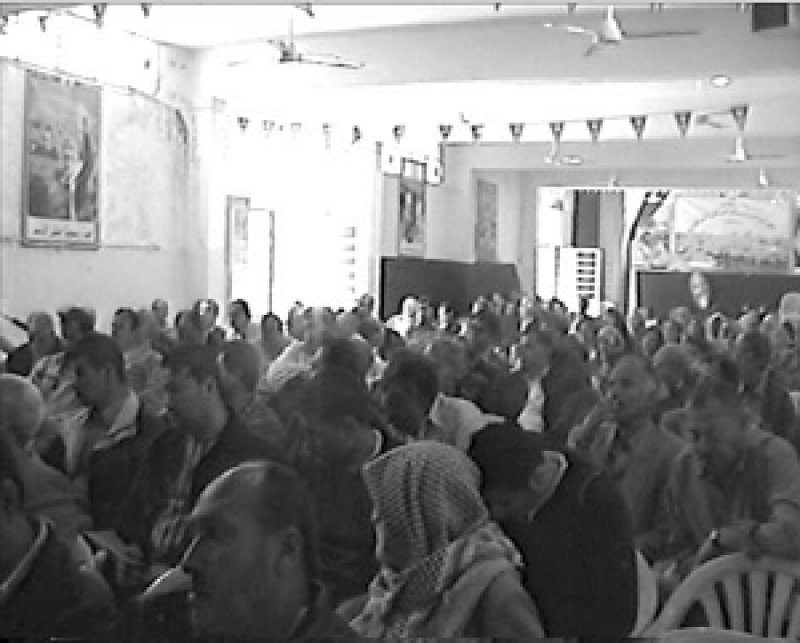 The Civitas collective research project, based at the University of Oxford, (See, 'Foundations for Public Participation Workshop', Majdal 25) is almost entirely a volunteer project run by the communities themselves, and is facilitated by a small team who are co-ordinating the activities in order to carry forward the voices of the refugees to the relevant bodies, and bring the urgent needs of the Palestinian refugees to the attention of the international community. During a series of publicly convened debates, each community runs their own needs-assessment exercise where they determine for themselves which structures and mechanisms they might need – for example, by strengthening existing structures such as unions and associations, by regular newsletters, delegations, monthly meetings, twinning, committees, and other means of communication.

Debates and workshops are taking place in dozens of cities in over 25 countries across the Middle East, Europe, North and Latin America. The series of debates that have taken place or are set to take place in the coming weeks follow different models according to the local geographic, social, and political constraints. Active members of Palestinian refugee communities have taken it upon themselves to find the most efficient ways, according to their capacities and local circumstances, to reach out to the different sectors of their community in the hopes of being as inclusive as possible. Additionally, during the debates great care is taken to ensure that the ideas and suggestions of the participants are noted down in detail by two note-takers, and are also recorded on audio and/or video cassettes so as to guarantee that their voices and views are accurately recorded.

In March and April 2005, several public and syndicate meetings took place within Palestinian refugee and exile communities across Europe. In Denmark, members of the Palestinian community have organized, in active coordination with the local organizations and community members, meetings in six different cities where there are sizeable Palestinian refugee communities. Similarly, such meetings have taken place throughout Sweden in the cities of Malmo, Uppsala and Stockholm, and are set to take place in the towns of Helsingborg and Gothenburg in May, all which have large Palestinian refugee populations. In Berlin, Germany, where one of the largest Palestinian communities in Europe is to be found, syndicate meetings for women and youth have been held and a large public meeting will be held mid May where more than 300 Palestinians are expected to attend.

A series of meetings in other German cities are being held: Frankfurt on the 24th of April, with meetings in Stuttgart, Bonn, and other cities to follow. In the Netherlands on March 31st, an open public meeting with more than 120 Palestinians attending was convened on the occasion of Land Day to kick-start the series of meetings that are being held in May. Similarly, in Athens, Greece, a public meeting was held and followed by a syndicate meeting for women; a preparatory public meeting in the Greek city of Thessalonika, which also has a sizeable Palestinian refugee community, was held on the 18th of April.

An extensive series of 17 meetings have been held all over Lebanon and have now reached their final phase. After long and well-thought out preparations, several teams working on the project have organized many types of meetings in the different key regions in Lebanon, ensuring inclusiveness of different sectors of the Palestinian refugee community and a large attendance. The series of meetings began with public as well as syndicate meetings of workers, youth/students and women for the Tyre region: around 170 people participated in the first public meeting in the al-Rashidiyeh refugee camp which was followed by a series of syndicate meetings such as a women’s meeting in Bourj ash-Shamali refugee camp, as well as one for workers in the al-Rashidiyeh refugee camp.

An open public meeting in Bourj al-Barajneh refugee camp initiated the series of meetings that have taken place in the Beirut area, which included syndicate and public meetings in the refugee camps of Shatila and Mar Elias. Additionally, an opening public meeting was held for the north area of Tripoli, where more than 400 Palestinians from the refugee camps of Nahr al-Bared and al-Baddawi and the surrounding areas attended, many arriving in buses in order to actively participate in the meeting which lasted for several hours. These were followed by syndicate meetings for youth, women, and workers.

During the meetings that have taken place thus far, participation has been impressive and diverse, varying in attendance from 20 up to 400 people, depending on the form of the meeting, the size of the community in the region in question, and the capacity of the local organizers to reach out to the community at large, all of which are integral components and factors that have been taken into account during preparations. Many of the new generation are participating in the debates and expressing their concerns, and in many refugee areas these meetings are the first time they had come together for many years, if at all. The first issue that refugees raised was the primacy of the right of return, as well as the centrality of strengthening the institutions of their sole legitimate representative, the PLO, which they affirmed through recommending broadening channels, as well as reactivating unions and other institutional and associational mechanisms. Suggestions and ideas brought forth during the meetings so far have been creative and rich, both in their content and their quantity.

Other ideas range from enhancing existing civic structures; practical issues such as obtaining Palestinian ID papers for local refugee communities in Europe as a way to both prove and protect Palestinian identity; twinning programs and network-building with Palestinian refugee communities around the world; radio stations and web-sites; maintaining and updating their registration with UNRWA if they are currently residing outside UNRWA mandate areas; organizing delegations and committees to voice concerns with all relevant bodies: the PLO, international humanitarian agencies such as the UNHCR, the host country or other refugee communities. As such, the refugees expressed the view that improving their political, economic, social and legal conditions will empower them, give them better chances to participate effectively in decisions relating to their future, and will help them better argue for, and obtain, their rights. Many more ideas and recommendations are coming in daily as the debates unfold.

In other countries and cities, preparatory meetings have taken place, plans of action have been finalized, and the meetings are set to occur on specified dates. In Europe, meetings will be held in the coming days in Madrid and Barcelona, Spain and in several cities across Norway. In the Middle East, meetings are set to start before the end of April in Yemen, Oman, Iraq and Sudan. Preparations are also well under way in several cities across Europe: Italy, Austria, the United Kingdom and France, as well as across the Arab world: Egypt, Jordan, Syria, Saudi Arabia, the U.A.E. and Kuwait. In these Palestinian refugee and exile communities, active members of the Palestinian community are holding preparatory meetings and dates are being set for a series of meetings to occur during May. In June meetings will be held in Algeria.

Contact has also been made with active members of Palestinian associations in cities across the USA, such as Chicago, Detroit, Los Angeles, Jacksonville, San Diego, New York, New Jersey, and in cities across Canada such as Vancouver, Toronto, Montreal and Ottawa. These associations are now in the process of outreaching to the different sectors of the Palestinian community in their area as they arrange detailed plans of action for convening meetings towards the end of May. Additionally, contact has been initiated with Palestinian exile communities across different Latin American countries as well as in Australia, and discussions are underway to organize meetings in these countries during the month of June.

Finally, as these meetings and debates are planned and taking place, a process of further inclusiveness exists for those Palestinian communities who are not currently in cities where meetings are underway or being prepared. Palestinian refugee and exile communities who would like to organize such meetings in order to run their own needs-assessment exercise can do so by contacting the Civitas team at the University of Oxford who could support them in preparing for such meetings, and in providing practical and logistical support.

Karma Nabulsi is the Project Director of Civitas.

More in this category: « “Another World is Possible.” Wiping Away the Traces – Update on Lifta Development Plans »
back to top