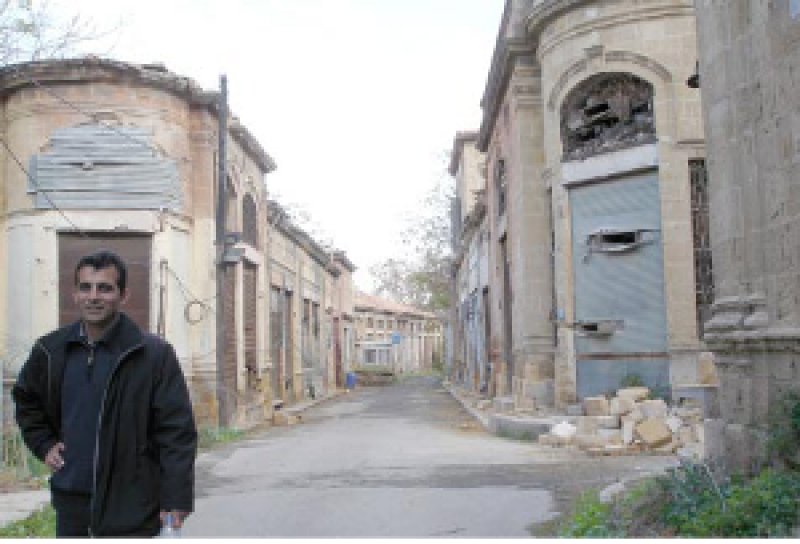 The United Nations has been dealing with the Cyprus problem for the past thirty years since it called for the withdrawal of the Turkish occupation forces and the return of refugees to their homes. Annan’s plan came to an end in April 2004, however, and the de facto separation of the island into two separate entities was accepted.


We walked throughout the so-called forbidden area or the demarcation line, which divides Nicosia, the capital, into two parts: the Turkish-controlled and the Greek-controlled, north and south of the island respectively. Meanwhile, the British soldier, head of the United Nation’s Unit, explained to us the nature of their work while our eyes roamed both sides of the road and the old alleyways. A few weeks earlier, we were questioning the reasons behind the Greek Cypriot rejection of the Annan plan, which was subject to a referendum, despite the fact that Cypriots have continuously demanded a political solution capable of reuniting the island and putting an end to the Turkish occupation.

As is well known, Turkish forces entered Cyprus and occupied one third of the northern part of the island in 1974 as a result of an ungainly coup against Makarios, the legitimate president. The Greek generals thus declared the island as part of Greece. The coup was unsuccessful, the Greek generals resigned, and military rule was put to an end; however, the island has continued to suffer from occupation until now. During the past thirty years, a lot of water has crossed under the bridge, so to speak; whereas Turkish-Cypriots withdrew to the northern part of the island with around 1,000 remaining in the south, many immigrants from Turkey came and settled in the north, and the northern government, which is only recognized by Turkey, officially expropriated and confiscated properties of displaced Greek Cypriots.

These displaced persons want to return to their homes or receive just compensation for their properties regardless of the political solution to the conflict. There is a well-known story of Ms. Tatiana Loizidou who demanded restitution and resorted to the European Court for Human Rights to raise her case. After many years the court issued its decision holding the Turkish government–as an occupation force– responsible for the woman’s inability to reach and use her property. Additionally, the court fined the Turkish government and demanded that it pay more USD 600,000 in return for usage of the property.

This may explain why Israel decided to place many Palestinian refugee homes in Akka or the remains of villages in the hands of the Custodian of Absentees' Property. The current status of these properties, however, raises questions about the commitment of the government of Israel and Zionist settlers to maintain these areas on behalf of the refugees. By comparison, the Turkish Republic of Northern Cyprus (TRNC), which is not recognized internationally, decided haphazardly to dispossess displaced persons' properties and register them under other people’s names. Undoubtedly, Israel knows very well international law pertaining to individual ownership and the rights of residents and refugees during a state of war.

The political solution offered by the Annan plan recognizes the de facto reality and includes complicated solutions in order to preserve basic principles of international law regarding displaced persons and property restitution. It does not lead to a substantial demographic change. The plan calls for two autonomous entities: a Turkish-Cypriot state in the northern third of the island and a Greek-Cypriot state on the rest, but united federally through a parliamentary council. One third of the council is supposed to be Turkish and two thirds Greek. Both entities are also united through a senate with equal membership in order to guarantee political equality. There is also a presidency council composed of six people (2 Turkish Cypriots and 4 Greek Cypriots), which is headed alternately by a Turkish-Cypriot for one third of the term's duration. In other words, the plan takes into consideration and implements the island’s demographic division in all the elements of the solution.

Annan’s plan gradually found acceptance among Turkish Cypriots, but remains unacceptable to most Greek Cypriots. The problem is not one where power clearly favors one party to the conflict. The thirty-year old Turkish occupation of the north continues and it will not end until the Turkish entity recognizes its presence and the demographic changes that evolved as a result of it. It seems that the Greek Cypriot side has failed to accept this 'bitter drink' despite its eagerness for a political solution to reunify the island and end the Turkish occupation. The plan not expected to move forward any time soon; it and the estimated five billion Euros worth of displaced persons property will remain stuck awaiting future developments by the Greek Cypriot side which voted against it.

Jamil al-Nimri is a writer and a journalist for al-Arab al-Yawm newspaper, which is published in Amman-Jordan. He is also the Head of the Jordanian Authority for Democratic Culture, and the Head of the General Council for the Jordanian Democratic Left Party, and a member in the Higher Council of Media and Information in Jordan. This article was published in al-Arab al-Yawm on 27 November, 2004. Translation Arabic to English by Rana Mousa

More in this category: « Principles and People Matter “Jewish Nationality,” “National Institutions” and Institutionalized Dispossession »
back to top