Report on the International Symposium 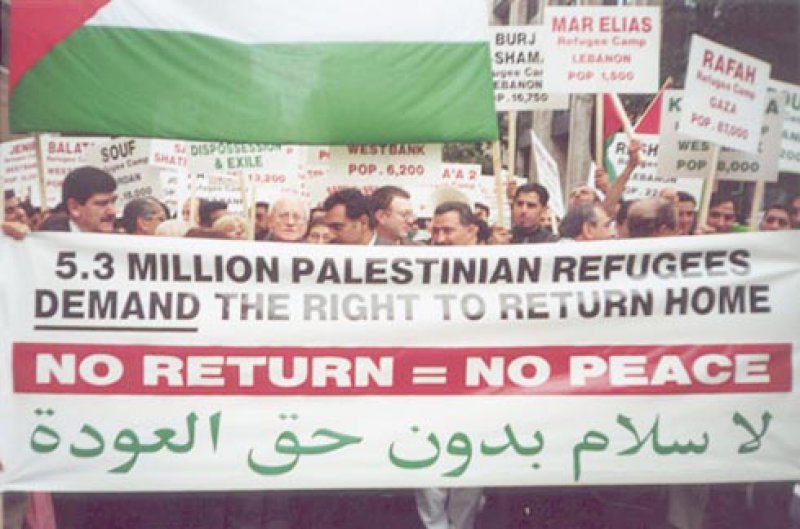 "Towards a Just Solution to the Palestinian Refugee Problem"

The Palestinian-Israeli negotiations inaugurated by the Oslo Accords over a decade ago have amply demonstrated the magnitude of the Palestinian refugee issue and its centrality to the Palestinian national question and Arab-Israeli conflict.
Based on this situation, A'idoun, a Palestinian community-based advocacy group for refugee rights, particularly the right of return, took the initiative to organize an international symposium in Damascus, in cooperation with Damascus University, entitled "Towards a Just Solution to the Palestinian Refugee Problem", over a two-day period, 6-7 September 2004. The initiative was based on the conviction that a just solution for Palestinian refugees would pave the way for a lasting peace in the region. Such a solution must be based on the principles of international law, human rights, freedom of choice for refugees and international resolutions, especially UNGA Resolution 194, which calls for three integrated rights (return, restitution and compensation).

The symposium brought together experts and specialists in international law and refugee affairs, from the Arab world, Europe, Canada and the United States, representatives of international organizations and research centers that specialize in refugee affairs, government officials from the Arab host countries, as well as activists involved in human rights advocacy from Palestinian civil society in Palestine, Lebanon and Syria.

The main goal of the symposium was to bring about a discussion of the components of a just solution to the question of Palestinian refugees, to determine the essence of such a solution in light of the principles of international law and to involve the refugees themselves in such a discussion.

The symposium was an unprecedented initiative as it was the first of its kind held by a Palestinian civic organization in an Arab country hosting a refugee population, with the participation of a state university. The appreciable success of the symposium may be attributed to its focus, program and organization, as well as to the participants, who were chosen to have impeccable academic credentials and who came from a wide variety of geographic locations. This was also reflected in the superior standard of the papers delivered at the conference, the serious and detailed discussion that they provoked and the interest generated in the audience, which was drawn from a wide range of academic, official and popular circles.

Perhaps the most novel thing about the symposium was that it constituted a qualitative advance over similar conferences in the past, since the initiative came from a local Palestinian civic organization in the context of a program that reflected the concerns of the refugee community and expressed their aspirations.

The meeting succeeded thanks to a well thought-out program, which gave the opportunity for representatives of Palestinian civic organizations and the various Palestinian political groupings to participate actively in the discussions about the question of refugees, and to link the political and legal aspects of the problem. This was amply demonstrated in the round table discussion, which was the culmination of the various discussions that took place during the conference.

Participants concluded that discussions should continue concerning the ideas presented at the conference, in the context of workshops held by local civic organizations concerned with refugee affairs. Discussions should also continue concerning issues that were not sufficiently addressed at the conference, such as temporary protection for refugees, in advance of a just and lasting solution. The enthusiasm exhibited by young people at the conference should be built upon, by planning cultural activities and programs that would revolve around the right of return and the national rights of the Palestinian people, e.g. summer camps, conferences, exchange visits, etc.

Conference proceedings will be published in Arabic as an academic and educational basis for the activities mentioned above. A set of selected conference papers has already been published in al-Adab. This success of the conference opens up new avenues for civic organizations working on Palestinian refugee affairs to further enhance the activities designed to involve the refugees themselves in fashioning their own future and determining their fate, according to a clear and long-term strategic plan.

Jaber Suleiman is a researcher and member of A'idoun Lebanon.

More in this category: « A Commentary on the Palestinian Coalition for the Right to Return Internally Displaced Palestinians Visit their Villages Memories, Identity and a Plan for Return »
back to top