Muhammad Jaradat
The Threat of Disengagement (Issue No.22, Summer 2004) 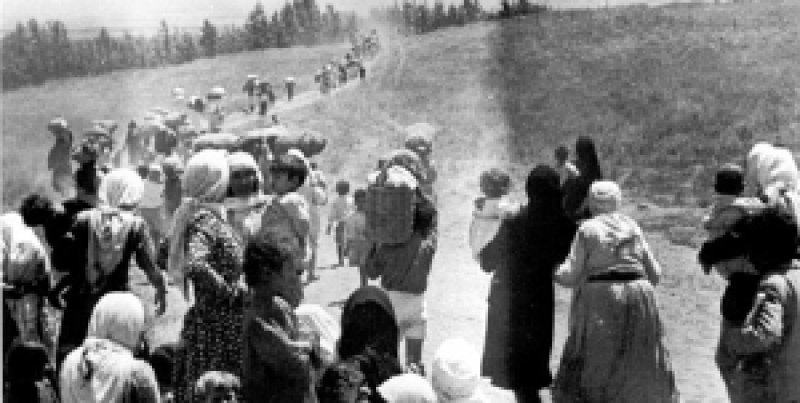 It seems, however, that Israelis have not been reading the political map well; that is to say, the PLO is and will remain the sole legitimate representative of the Palestinian people and the Palestinian national movement. National liberation movements do not simply transform themselves to serve their occupiers. One of the main lessons of the past three and a half years since the beginning of the second Palestinian intifada is that a people’s struggle for a just cause cannot be defeated by prisons, house demolitions, political assassinations, separation walls and other human rights violations. People inevitably find ways to express their resistance and continue activities to maintain the struggle for a just peace that is not just for Palestinians but also for Israelis and the entire region.

Activities for the 56th anniversary of the Nakba included workshops and debates in most of the refugee and non-refugee communities across the occupied territories. Topics of discussion and debate included: “Durable Solutions and Refugee Rights”; “Durable Solutions and Property Restitution”; and, “New-Old Initiatives” (e.g., Nusseibeh-Ayalon and the Geneva Accords). These workshops represented a significant shift in the substance and quality of discussions with former workshops focusing mostly on reaffirming refugee rights.

The 2004 Nakba commemoration was launched in late April by an all-Palestine TV awareness-raising campaign. The programming included 1-2 hours of documentary films, live debates, and interviews with Palestinians in exile. The Association for the Defense of the Rights of the Internally Displaced inside Israel held its annual return march in the Galilee on 27 April (see above). More than twenty of the finest Palestinian, Arab, international and Israeli writers contribute to a special double issue of Haq al-Awda distributed as a supplement to the Palestinian daily al-Ayyam, the Haifa based daily al-Ittihad, and individually outside Palestine/Israel.

Nakba commemorations reached a peak on 15 May with right of return rallies in all districts of the 1967 occupied West Bank and Gaza Strip and in Tel Aviv-Jaffa (See above). In the occupied territories, PLO Chairman Yasir Arafat and PA Prime Minister Ahmed Qurei’ designated 15 May as a national day of commemoration. In addition to rallies and marches, the day was marked by 3 minutes of silence at noon followed by Yasir Arafat’s address to the people of Palestine in the homeland and in exile. The speech was broadcast live on Palestinian satellite TV, the Voice of Palestine and on Arab satellite channels. The 56th Nakba commemorations have witnessed increase in Israeli Jewish activities, including inter-community dialogue over solutions that guarantee refugee rights.

These activities, together with the hundreds of activities conducted by Palestinian communities in exile and international solidarity contributed to raising awareness that the root cause of the conflict is not ‘disputed’ territory but fundamentally about people’s rights, including the right to live in a secure home, and the right of the people themselves to participate in the process of shaping their own future. Slowly, but with confidence in the future, we will march all together, people who believe in justice and peoples rights, towards a peaceful and prosperous Palestine.

Muhammad Jaradat is coordinator of the campaign unit at BADIL Resource Center.

More in this category: « Possible Outcomes of the ICJ Opinion and Some Conclusions Zochrot Organizes First March of Return in Tel Aviv-Jaffa »
back to top