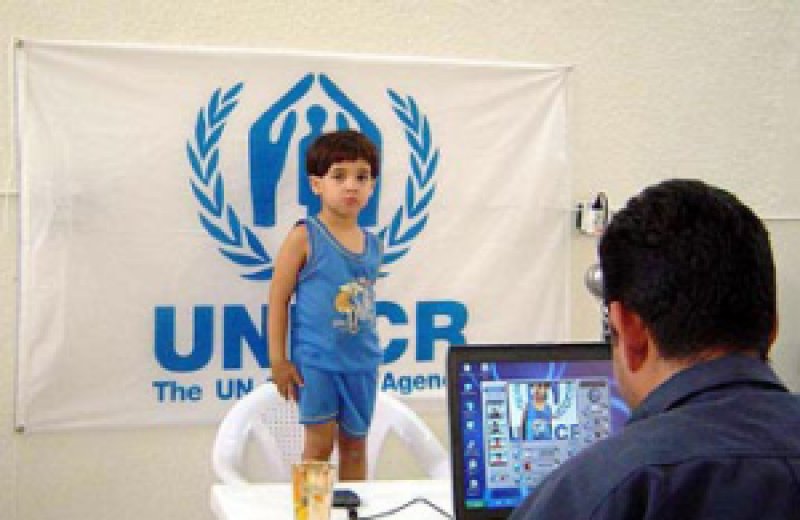 While the main motorway to Cairo International airport is the path that takes one anywhere in the world, the road parallel to this highway leads to Madinet el Salam, a newly-constructed housing complex, where many Palestinians live. It represents the dead end for Palestinian youth whose future is limited to becoming a factory worker, if they are lucky, earning US$30 a month.

Ever since 1978 subsequent generations of Palestinians cannot attend Egyptian public schools, must pay university fees in foreign currency, and cannot work legally without a work permit. Palestinians have been known as the most educated people of the Middle East, but rapidly they are becoming the illiterate people in some host countries of the Arab world.

The Arab League's 1965 protocol concerning the ‘Treatment of Palestinians in the Arab States' made all host countries responsible for treating Palestinians as nationals in respect to mobility, free education, and work, without jeopardising their Palestinian identity through such measures as naturalisation. Except for Palestinians in Jordan who were naturalised, the standards of 'treatment' of Palestinians in host states have been plummeting. They are today the 'unprotected' stateless Palestinian refugees of the Arab world.

The Zionist military attacks in 1947-1948 resulted in the expulsion of 700,000 to 900,000 Palestinians from their own homes and villages in historical Palestine. The majority were expelled to Jordan, Syria and what has become the West Bank. Those who were living on the coastal plains of Jaffa and Haifa left for Lebanon and Egypt. The intensive attacks from the sea and encirclement of the cities by British forces left the local inhabitants of Jaffa no choice but to flee by boats to the south. Some arrived in Gaza and remained there, others continued on to Port Said, Egypt.

As in any mass exodus, people tend to group themselves according to their common origins, villages, families and networks. At the beginning these headed directly towards Cairo, the capital. The authorities permitted some of them to use old British military settlements and gave tents to shelter the rest: "We lived in military barracks with the same people who left Jaffa with us. We had sheets dividing the one from another. Then the Mukhtar (chief) of Mohammadi area permitted us to choose our space of land to build little houses with the collected bricks from the roads", remembers Um Walid. She was one of those who moved in the 1980's to Madinet El Salam after the demolition of Arab el Mohammadi slums in Abbasieh.

Palestinians who lived near Mohammadi mosque were called Arab El Mohammadi. She said that they chose to stay in Cairo when in 1949 the Egyptian authorities gave Palestinians the choice of going to Maghazi camp in Gaza. They expected life to be easier for them in a well-established city like Cairo. It was not really the case. No schools were available at the time in Abbassieh area, jobs were scarce and there was little money. Many of this generation and their descendants ended up becoming small entrepreneurs with minimum education.

With the increased numbers of refugees coming to Egypt, the authorities prepared what became called the 'city of refugees', located in Qantara, the north east Egypt. The 'High Committee for Palestinian Migrants Affairs' was formed to respond to the needs of refugees in the Qantara, inhabited by some 12,000 refugees. According to Laurie Brand, they were provided such basic services as water, electricity and primary education schools, a sports club, and a postal service.(1) Palestinians were employed in some of the jobs of the camp.

In September 1949, an Egyptian ministerial council decided to move Palestinians to Gaza, as the situation had become more stable. With the help of the Quakers, Palestinians were sent mainly to Maghazi camp. Another group of Palestinians were later sent to Gaza in 1951 sponsored by the Arab League and the Egyptian authorities. The Government of Egypt never welcomed the idea of establishing any refugee camps on its territory nor did it welcome the international assistance provided by the specially created UN body to assist Palestinians, the UN Relief and Works Agency.

Only well-to-do Palestinians or those who had support of a local guarantor were to stay in Egypt. Others who remained because they did not want to go to Gaza for reasons of safety ended up staying in the slums of Cairo or its suburbs working in the informal sector or depending on wage labour in factories where they are exploited.

The estimated figure today of Palestinians in Egypt is 70,000 according to government officials. 52 percent of this population is found in urban areas as in Cairo and its districts and in Alexandria. The rest live in North Sinai, Areish and the Sharqieh areas working in the agricultural wage labour jobs.

The purpose of establishing UNRWA was to carry out relief and works programme and to ensure the economic independence of Palestinian refugees, but as Susan Akram
points out, all Palestinian refugees have been treated as ineligible for the most basic protection rights that international law should proffer refugees and stateless persons.(2) UNRWA's responsibilities, based on UNGA Resolution 302, are, in fact, only "to prevent conditions of starvation and distress among them and to further conditions and stability", not to protect.

The mandate of UNRWA was limited to the five field operation of Jordan, Lebanon, Syria, West Bank and Gaza. In accordance with paragraph 7(c) of the UN High Commissioner for Refugees (UNHCR) statute and Article 1(D) of the 1951 Convention relating to the Status of Refugees, 'the competence of the HCR does not extend to a person receiving from other organs or agencies of the UN protection or assistance', hence persons enjoying the assistance of UNRWA are excluded. One would have expected, however, that Palestinian refugees living elsewhere were to be protected by the UNHCR. On the ground, UNHCR did not undertake its responsibilities to the Palestinian refugees in Egypt until 2000.

Throughout the 1960s and 1970s, Palestinians in Egypt had been provided some assistance by the Egyptian authority - free primary, secondary, and university education and were employed in public sector jobs. Since the signing of the peace process with Israel in 1977 and the killing of the Minister of Culture in 1978, all has changed. The Palestinians were not welcome anymore and they were required to live without any of the public services that are available to Egyptians.

In principle, the Government of Egypt has been abiding by the Arab League's 1954 Resolution on the issue of 'Unified Travel Documents for Palestinian Refugees'; it issues travel documents as identity cards. This travel document can be used for travel outside Egypt so long as it does not exceed six months of stay abroad. If it is exceeded, the person is not permitted to enter Egypt. Many Palestinian families, whose children travelled for work, study or marriage, despair ever seeing them again.

For some, the regulations of residency cannot be met. Young men who are not attending school are asked to provide a bank statement indicating a balance of at least 25,000 Egyptian pounds or a work permit. A vicious circle. A work permit will not be issued without a residency permit and accumulating a 25,000 Egyptian pound bank account cannot be generated if there is no work. Many men live in the shadows of illegality not having a valid residency permit.

In 1991, after the Gulf War, there were said to be 130,000 Palestinians living in Egypt. Today they are said to be about half that many. What happened to the others? Some of them, because they were members of Palestinian Liberation Organisation (PLO) received 'family reunification' cards to move to Gaza and the West Bank. They received a Palestinian Travel Document with the indirect blessing of the Israeli authorities. Others simply moved to the territories on the invitation of a friend or relative. This visiting permit (tasreeh) is only valid three months. Evidently many have overstayed the permit and have lost their Egyptian travel document as a result. So, whether in the Occupied Territories or in Egypt, Palestinian refugees remain unprotected and stateless.

Oroub al-Abed is a researcher at the Forced Migration and Refugee Studies Programme, American University in Cairo, who has conducted a qualitative study of the livelihood of Palestinians refugees in Egypt. For more information about the findings please contact the author.
email: This email address is being protected from spambots. You need JavaScript enabled to view it.

More in this category: « Refugee Protection Council of Europe Issues Recommendations on Palestinian Refugees »
back to top