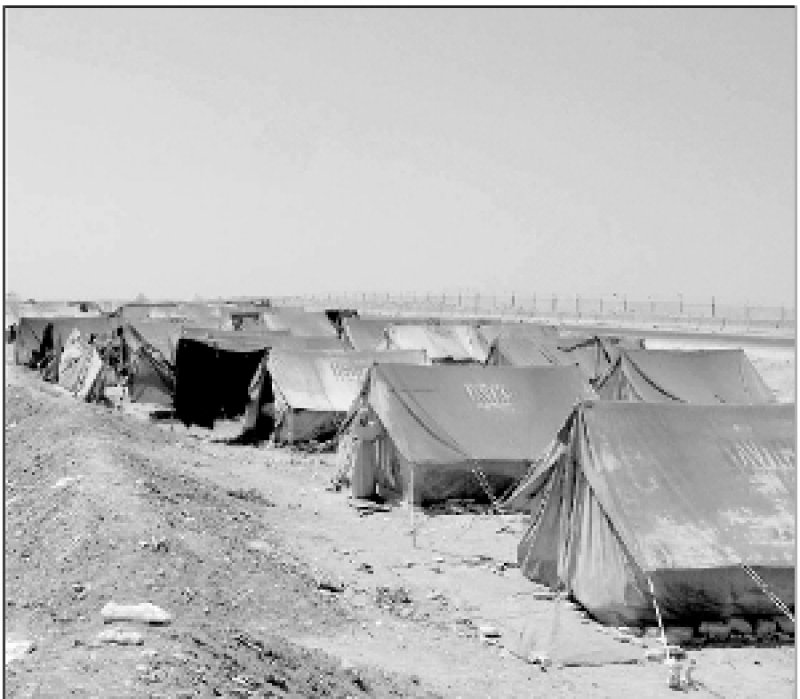 Damascus – ‘Aidoun Group. Since the 2003 US-led invasion and occupation of Iraq, sectarian militias, Iraqi and U.S. military forces have launched several campaigns systemically targeting the Palestinian population living in Iraq, campaigns that, according to international organizations, have used methods that include expulsion, imprisonment, torture, and extrajudicial killing. As a result, many Palestinian refugees have fled to neighboring countries and refugee camps on the Iraqi borders.

It is estimated that of the 35,000 Palestinians living in Iraq in 2003, approximately 15,000 remained there after the war. Hundreds of Palestinian refugees sought shelter in temporary refugee camps including Al Walid, Al Ruwayshed, Al Hol, and Al Tanaf, in neighboring countries or on the Iraqi borders with Syria and Jordan.

On 5 March 2007, the ‘Aidoun Group (Syria and Lebanon) organized a workshop, entitled “Palestinian Refugees in Iraq: The Lost Protection”, to address the conditions of and seek ways to provide protection for Palestinian refugees in Iraq. The workshop was held at the Ridha Said Conference Hall, at Damascus University, and was attended by 120 participants from Syria, Lebanon, Palestine, Jordan and Iraq.

Several documents, papers and discussions were presented throughout the three-session workshop, each addressing the responsibility towards the Palestinian refugees in Iraq and the role of all the involved parties in resolving this issue. Moreover, live testimonies of survivors who fled to Syrian to escape the atrocities committed against them in Iraq were presented.

However, since the US-led invasion of Iraq and the fall of the previous regime, the living conditions of Palestinian refugees has drastically deteriorated, with many of their rights being revoked. In this context, the Coalition Provisional Authority and the transitional governments undertook the following discriminatory measures against Palestinian refugees in Iraq:

3- Halting the issuing of new Identity Cards, and refusing to replace and/or renew old, damaged or lost cards.

4- Imposing restriction on the movement and transportation of Palestinian refugees and preventing them from leaving Iraq.

5- The Palestinian refugees in Iraq are exposed to terrorism, arrest, imprisonment without trial at the hands of militia men, members of the National Guard and US occupation forces.

The participants in the workshop concurred to define, describe and diagnose the living conditions of Palestinian refugees in Iraq. They also agreed on a set of general recommendations to correspond with the realities and conditions under which these refugees live.

However, their views and opinions varied and differed regarding the definition of the desired temporary protection, its limits, its scope and the implications of solutions presented. Among these opinions the following were most significant:

• To reject any resolution based on the repatriation of Palestinian refugees in neighboring Arab countries such as Syria, Jordan, Saudi Arabia or the Palestinian territories of the West Bank and Gaza Strip;

• To reject the transfer of Palestinian refugees to Kurdistan, Iraq to provide a temporary safe haven for them - a solution that was proposed and discussed between the official Palestinian delegates who visited Iraq for talks with Iraqi President, Mr. Jalal Talabani. This rejection stems from the fear that this will be the first step towards resettling the refugees in Northern Iraq;

• To call upon the neighboring countries, especially Syria (famed for the generous and hospitable treatment of Palestinian refugees there) to temporarily host the refugees from Iraq until a solution to the problem is found. The main concern here is the urgency of the immediate threat to their lives, a concern that cannot wait until the right of return is realized.

They demanded that serious and efficient action be taken to absorb these refugees in the West Bank and the Gaza Strip. Furthermore, they called for the implementation of steps that would help to overcome the obstacles that hinder such actions.

The participants in the workshop held the government of Iraq, its affiliate militia, and the government of the United States responsible for the suffering of both Iraqi civilians and Palestinian refugees living in Iraq. Under the terms of the Geneva Convention of 1949 and its Annexed Protocols of 1977 regarding the protection of victims of military conflicts, it is the responsibility of the government and the occupying power to protect civilians in times of war.

The participants emphasized the following issues:

First, the urgent necessity for action on the part of the Palestinian Authority, PLO, political factions and civil society groups in Palestine and the world at large to resolve this issue.

The PLO is especially responsible and must utilize its relations with the international community to find practical and serious solutions to respond to the urgency of the matter at hand. The PLO must act to protect the personal, social and economic rights of Palestinian refugees, while keeping unchanged their legal status and upholding their right of return.

Therefore, this issue should not be considered as the responsibility of the Refugee Affairs Committee of the PLO alone.

Second, the PLO should consider the victims of the attacks on Palestinian refugees in Iraq as martyrs of the Palestinian cause and the relevant Palestinian institutions should adopt their children.

Third, members of the Palestinian Legislative Council should be urged to mobilize, quickly and efficiently, to pressure Arab parliamentarians, especially the Arab Parliamentarian Human Rights Committee, to list the issue of Palestinian refugees in Iraq among world Parliamentarians as a human rights issue.

Fourth, the urgent need to activate the role of Palestinian civil society groups and organizations to form a relief committee/fund to coordinate with other Palestinian and Syrian relief groups and commissions to provide relief aid and support initiatives and efforts aiming to assist Palestinian refugees in the border camps.

Fifth, increasing the utilization of mass media to enlist the support of Palestinian and other Arab communities in the Arab World, Europe and North America to muster the support of western public opinion to defend the rights of Palestinian refugees in Iraq and uphold the provisions of International Humanitarian Law, especially the provisions of the 1949 Geneva Convention.

Sixth, to work towards the founding of a Palestinian-Iraqi committee, with members from Palestinian and Iraqi civil society groups and organizations, to coordinate, especially with the Iraqi Network for Human Rights and Development, to assume responsibility for following up the Palestinian refugees’ issue. The proposed group would collect data, document cases and liaise with International Rights Committees to present the issue in the international arena and file law suits against the US Occupation Forces, along with certain officials within the Iraqi government and its affiliate militia, for war crimes and crimes against humanity.

Seventh, to submit a memorandum to the Arab League regarding the dire living conditions of the Palestinian refugees in Iraq and urge it to attend to its responsibility to pressure host countries to abide by their commitments as per the provisions of the 1965 Casablanca Protocols and all other related accords.

Eighth, to call upon the United Nations High Commission on Refugees (UNHCR) and the United Nations Relief and Work Agency (UNRWA) to coordinate their efforts to facilitate the registration of Palestinian refugees in Iraq, and to protect them until the Iraqi problem is resolved or they are repatriated to their homes as per the provisions of UN Resolution 194.

Ninth, to work towards the design, planning and launch of an Arab civil campaign to protect Palestinian refugees in Iraq and to muster the support and participation of Arab civil networks in the campaign. Furthermore, to create an internet site that would serve as a medium for dialogue and cooperation among the various members of the campaign.

More in this category: « Towards Freeing the Right of Return of the Constraints of Slogans BDS UPDATE »
back to top