Towards Freeing the Right of Return of the Constraints of Slogans 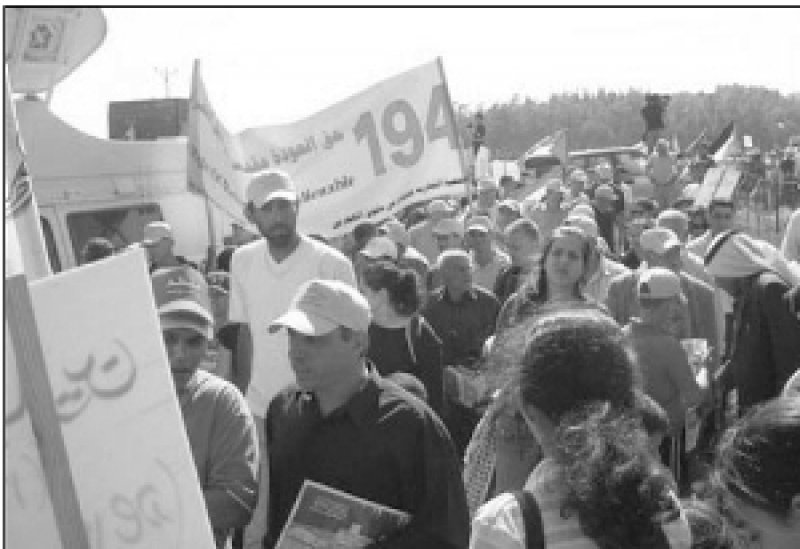 A pleasant surprise awaited us at the 1948 depopulated Lajoun village this year. Approximately ten thousand people from all generations and political loyalties, five times the number of people that were present last year at the Carmel village of Um Al Zeinat, attended the demonstration that intentionally and challengingly coincided with the Hebrew date of “Israel’s independence” to express the living memory and power of legitimacy.

A long line of cars and buses stretched from the Megiddo junction to the outskirts of the village. Those who walked gathered at a meeting point in a narrow valley where an old and picturesque windmill stands just below the sad cemetery of the village.

On the way, I spotted an Israeli television crew whose cameraman later said that they attended the demonstration as part of a documentary television series about Palestinians in Israel. Among all the questions they asked, one was most frequent: “Do you want the Palestinian refugees to return to live next to existing Jewish towns or do you want to replace and evacuate them?”

As this question, a question that mixes politics and emotions and demonstrates the intentional misinformation that serves the interests of the official Israeli establishment and not the TV station itself, shows, the issue of the rights of Palestinian refugees has not freed itself from the constraints of slogans and counter slogans.

I believe that a stopping at all the slogans that promote the rights of refugees is due. A serious consideration of the slogans might be realized through evoking the words of the revered Marxist Syrian intellectual Sadeq Jalal Al ‘Adhem who, over three-and-a-half decades ago and in his book “Leftist Studies of the Palestinian Question” (Dar Al Talia’h, 1970), questioned the use of the slogan “Liberating Palestine” by the Arab regimes.

“…this slogan remained, over the past twenty years an obscure, sacred and mysterious idea that was not to be seriously queried, examined, critiqued or detailed and explained at the practical, actual and futuristic levels…And by that, I mean that liberation invoked the image of the conquering Arab armies conquering Israel as Palestinians present old deeds to their homes or lands and the victor will reinstate the rights of all as if nothing had happened”.

In other words, the idea of liberation remained sacred, obscure and naive until the defeat of 1967…The silence of the Arab leaders regarding the concept of liberation and its definition, coupled with self-distancing of political parties and faction from the clarity of the concept, its contents and historical background, had had a significant impact in emboldening and bolstering the illusion in peoples’ minds, hearts and emotions through the continuous use of slogans without discussing or explaining such slogans. This indeed is demagoguery manifest.“

The contradictions generated by the absence of clear definitions and the agendas that underline slogans, coupled with the implications of their generality, made it possible for leaders to manipulate slogans to serve their interests and further distance themselves from their fundamental concepts. Slogans that are not based on solid agenda and definitions can be easily dismantled and altered into non-binding and hollow rhetoric.

Today, across the Arab world and beyond, the stated premises of the Right of Return (a right that is essential to any Political settlement of the Palestinian question and without which an environment of escalation and complication of the situation will prevail) continue to be manipulated to serve many objectives and purposes.

To us, to Palestinians who were expelled, to those who remained and to many in various Arab nations, the Right of Return epitomizes the revolutionary hope of restoring our just rights and faith in the legitimacy of the cause. However, when manipulated by the official Arab authorities, who never attempted to avert our Catastrophe, the Right of Return is transformed into a set of popular subjugation and sedation tools. The Right of return is espoused by Arab leaders who, at the same time, absolve themselves of any responsibility to act.

For proof of this duplicity, we need only look to the United States of America, a country that represents the most ardent denier of the Catastrophe that befell the Palestinian people. Its denial is manifested in the categorical rejection of the rights of Palestinian refugees.

Despite this policy of the US, the majority of Arab states and regimes submit, unreservedly, to the whims of Washington. Arab leaders and officials hardly criticize US policies and when they do, their criticism is hollow and incredible.

How is it possible, then, to implement the Right of Return while expressing blind loyalty to the most ardent denier of that right, a power that continues to commit crimes against the Palestinian population?

In Israel, the politics of deception have reached treacherous proportions and its deceit, unfortunately, continues to be believed. Over the years, the Israeli state has persisted in making a fallacy of the meaning of the Right of Return as the Palestinian “codeword for their aspirations to destroy Israel and expel the Jews”. Playing on the basic human instinct of fear and the so-called “demographic threat,” the state of Israel has managed to remove the right of return from the immediate agenda.

Deceitful politics claiming that any recognition of the Right of Return of Palestinian refugees poses an immediate threat to the existence of Jewish people, have led the Israeli Jewish population to encircle itself with walls of fear and loathing, allowing the upper echelons of the Israeli state to further complicate an already complex situation. Such maneuvering has succeeded in suppressing the just and legitimate claims of Palestinian refugees and for this reason, it is particularly important that the concept of the Right of Return is bolstered and supported by real action.

Supporting the Right of Return necessitates an explanation of the practicality and realization of such a right in order to allow for open political confrontation. It is unrealistic and illogical to keep it a broad and general concept that is vulnerable to a political trickery that is designed to maintain the bloody status quo.

In the contextual analysis of the impetus and implications of the colonial process, honesty and integrity must be espoused to prevent deceit. Political trickery must be barred from tampering with the feeling and emotions of the Palestinian refugees and people.

Several questions that need careful examination and answering present themselves: 1) is it possible for refugees to return to homes that no longer exist, or to the villages that were destroyed and a new Israeli town erected over their ruins; 2) when the refugee issue is discussed, do we mean the resurrection of old houses and the destruction of Israeli towns and the evacuation of Israeli residents; or 3) by return do we mean the start of a new life in parts of the destroyed villages or in existing towns and villages in accordance with the principles of just and logical redistribution of lands that are vast enough to absorb everyone?

A few years ago, together with the Israeli progressive activist and Tel Aviv University lecturer Prof. Gadi Alghazi, I co-authored an article that stated:

“It is important that Israel recognizes the injustice, compensation and taking into consideration the victims of such injustice and, rectifying it without creating further injustices. It is clearly evident that a robust peace between the Israelis and the Palestinians is impossible without the adoption of justice and rectification of the injustices committed–especially the resolution of the refugee issues. Although the Right of Return is reserved, recognition alone is not enough since as a slogan it explicates nothing.

Therefore, in our opinion, focus should be directed at the restoration of the rights of refugees as opposed to “historical justice”; their rights to return to their homeland; to become citizens enjoying full citizenship rights in the country in which they live or will return to, or; their rights to live in dignity under logical and indiscriminate treatment, and satisfactory social and economic conditions, with special treatment in certain areas.

The main focus here is on respecting their free-will whether to return their areas in Israel, Palestine, future confederated areas, to settle in their host countries or to immigrant to another country using a passport”

Under the current political state, the right of return remains vulnerable to the various personal interests of leaders and politicians. It is of the utmost importance to present this urgent Palestinian question in a fashion that prevents the re-occurrence of “resolution” experiments that left many issues undefined and that opened the path for a trickery and procrastination that rendered the situation explosive, yet again. It is important to prepare a systematic Palestinian plan that translates the hope of return into a practical and attainable objective.

One of the ways to counter the Israeli circles of deceit is represented in depicting the just issues of the Palestinians in a clear political manner, a manner that is founded on a broad vision that is removed from mystery, romance and fantasy.

Those who claim that refugee rights are “fantastic romances” tend to deny their reality, applicability and practicality. Generations of refugees do not aspire to be romantic subjects to be sung about. This issue must now be formulated in a methodical and detailed political approach that allows for the participation of refugees and their representatives in paving the way for a realm in which they can practice their rights, present just and alternative solutions for implementation and in which they can respond to the systematic and official expansionist policies of Israeli institutions.

Should we insist on running the empty circles of slogans within the parameters of pleas, the reserving and upholding this Palestinian right that is assured morally, nationally and internationally is jeopardized.

It is time to formulate it as a bold, clear and applicable political plan that is able to break free from the countless realms of trickery and conspiracy.

Hisham Naffa’a is a journalist, author and Palestinian political activist living in Haifa.

More in this category: « The Jewish National Fund (JNF): ‘Aidoun Group Workshop in Damascus »
back to top