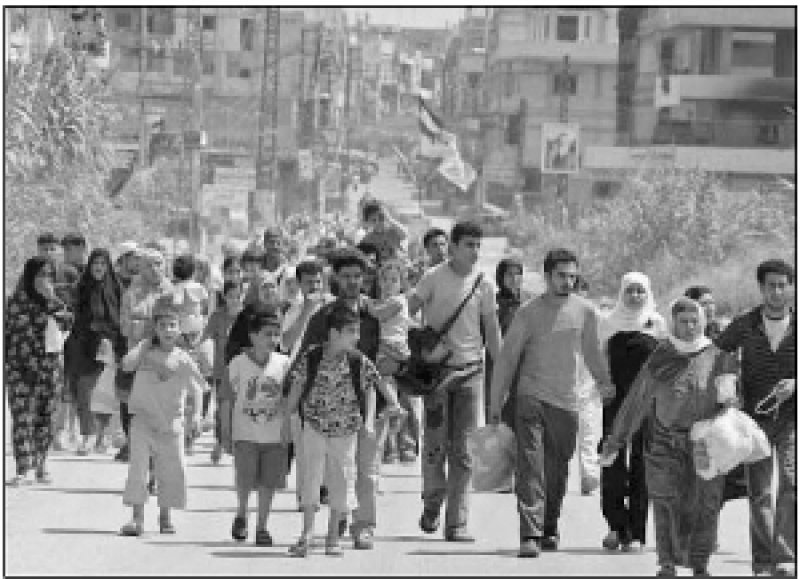 The International Committee of the Red Cross (ICRC) has been unable to deliver any food, water or medicine in the camp since 22 June.(1) The camp has sustained extensive damages; thousands of refugee shelters have been demolished and water and sewage networks have been destroyed. Aid agencies are planning the return of the refugees, but return will take time because of unexploded ordnances; at least one month will be needed after the end of the hostilities, depending on the progress of the deminers.

Over 25 per cent of the people in Nahr el-Bared (8,627 persons out of 31,023) are registered as special hardship cases by the UN Relief and Work Agency (UNRWA), making it one of the poorest Palestinian refugee camps.(2) Lebanon’s government and the opposition have promised to help rebuild the camp, while Saudi Arabia has handed checques worth US$1,330 to nearly 10,000 families.(3) UNRWA has launched a flashappealofUS$12.7milliontoaddresstheurgent needs of thousands of internally displaced Palestine refugees. Palestinian refugees are afraid to leave the Beddawi camp or other places of refuge as reports from local and international organizations have documented the arbitrary detention and torture of Palestinian refugee men by the Lebanese army.(4)

The events in Nahr al-Bared may have come as a surprise, but to some this was bound to happen. According to US journalist Seymour Hersh,(5) the redirection, a new strategy of the White House, is an American-Saudi plan employed to weaken Iran and Hezbollah, or what has been called the “Shiite crescent”, and has widened sectarian conflict between Shiite and Sunni. Hersh defines four components to this grand plan: 1) assure the security of Israel, in particular against Iran; 2) support by Saudi Arabia of Hamas and Fatah talks and an end to attacks on Israel; 3) counteract Shiite ascendance in the region with the help of the Sunni nations; 4) provide funding, from the Saudi government and with US approval, to weaken the government of Bashar al-Assad in Syria.(6)

In Lebanon, Hersh says that this has translated into financial support, mainly by Saudi Arabia and backed by the Lebanese Siniora government, of Sunni Salafi groups (i.e. Sunni groups who see Shiites as apostates) with the goal of destabilizing Hezbollah. Hersh reported that “American, European and Arab officials...told me that the Siniora government and its allies has allowed some aid to end up in the hands of emerging Sunni radical groups in northern Lebanon, the Bekaa Valley, and around Palestinian refugee camps in the south. These groups, though small, are seen as a buffer to Hezbollah; at the same time; their ideological ties are with al Qaeda.” Fatah al-Islam and Asbat al-Ansar in the Ein el-Hilweh refugee camp are some of the alleged funded and supported groups. These groups, most of which emerged in 2006, are composed mainly of foreign fighters. Some Fatah al-Islam members have also allegedly said that they wanted to “liberate al Aqsa mosque in Jerusalem and protect Sunnis.”(7)

Other journalists, such as Franklin Lamb (Who’s Behind the Fighting in North Lebanon), Bill Noxid (Proxy Wars) and Alberto Cruz (The Secret War Against Hizbollah) have reported similar plans.(8) Lamb wrote that “the plan was that actions of these cells, of which Fatah al-Islam is one, could be blamed on al Qaeda or Syria or anyone but the Club [the ‘Welch Club’ being based on David Welch, assistant to Secretary of State, Rice and other Lebanese groups such as Hariri’s Future Movement party].”(9) According to Lamb, “these cells are throughout Lebanon and are organizing broadly and not just in the Palestinian Camps, where they are resisted by Hamas, Fatah Arafat, and the Popular Front for the Liberation of Palestine, as in Shatilla and Burj al Baraneh Camps.”(10)

Alberto Cruz and Franklin Lamb have also reported that NATO has plans to build a military base in Qleiat, close to Tripoli, and on the border with Syria, which could explain why the US now wants funding of these forcefully anti-American Sunni groups to end.(11) The proposed US/NATO base, “The Lebanese Army and Security training centre”, would “serve as the headquarters of a NATO rapid deployment force, helicopter squadrons, and Special Forces units” and would “provide training for the Lebanese army and security forces fighting Salafi, Islamist fundamentalists and other needs.”(12) The base would likely be available to Israel. Lamb also reported that the actions of Fatah al-Islam may have intended to stop the establishment of a US/NATO military base next to Tripoli, which could explain why they had based themselves in the city.(13)

Events surrounding the beginning of fighting in Nahrel-Bared are still unclear, but according to some sources, the conflict started on 20 May 2007 because the fighters of Fatah al-Islam, who had not received their salary (i.e. the Welch Club and/or the US and Saudis having decided to stop funding the group), attacked the bank which usually issues their checques. Another report adds that the bank robbery took place on 19 May and that the fighting broke out the next morning after security forces raided a suspected Fatah al-Islam safe house in Tripoli.(17) Others say that the the trigger was an attack by the groug on a Lebanese army post.

After the initial clashes, many of Fatah al-Islam fighters retreated to Nahrel-Bared camp and took control of army posts at the entrance of the camp. The Lebanese army received the mandate from the Lebanese government to ‘remove’ Fatah al-Islam from the camp as the group vowed to fight until death. The army has since shelled and bombarded the camp and called on the group to surrender. By the beginning of July, most members of Fatah al-Islam had been killed or arrested and fighting had nearly ended. A final assault was launched by the Lebanese army as of 11 July. As of writing, fighting is ongoing.

Meanwhile, to show support for the Siniora government and protect its ‘allies’ in the Middle East, the US has sent planes full of military supplies to Lebanon and has increased its military aid to Lebenon sevenfold since 2006.(18)

While most in Lebanon have supported the Lebanese army vis-à-vis Fatah al-Islam, it was also suggested that a political solution could have been found to the problem and that the Lebanese army was “fighting al Qaeda on America’s behalf.”(19) What is clear though, is that Palestinian refugees, although they do not support Fatah al-Islam, are suffering once again from US interference and the results of its fundamentally flaud policies in the Middle East.

Karine Mac Allister is Coordinator for Legal Advocacy at Badil.

18. “The US is spearheading an international effort to upgrade and modernize the Lebanse Army. Last year, Washington allocated Lebanon $40 million in military aid, and this year the figure has soared to $280 million. ”Nicholas Blanford. “In fight against militants, Lebanon bolstered by US, Gulf countries”, Nahral-Bared camp; The Christian Science Monitor, 4 June 2007.

More in this category: « An injustice to the injustice The Ongoing Nakba »
back to top