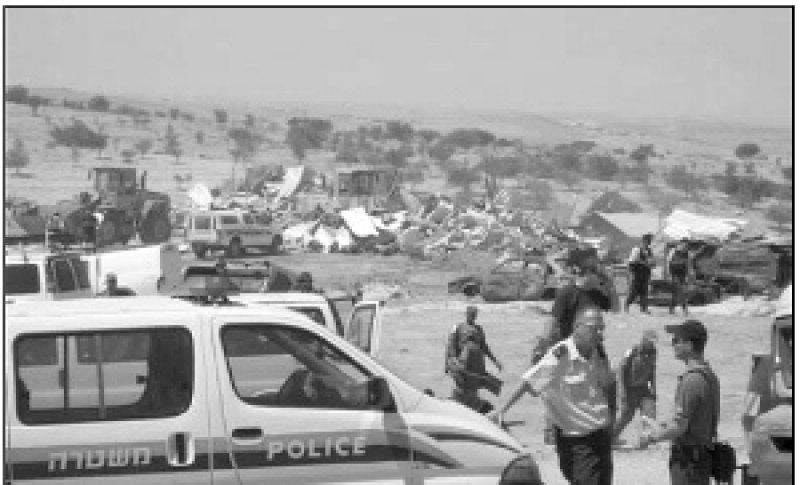 Update on home demolition in the Naqab

Last edition al-Majdal (issue No.32) reported on demolition of Bedouin Arab homes in the Naqab and since publication there has been no let up in this government policy of displacement. On May 8, the entire village of Twail Abu-Jarwal, 30 tents and huts, homes to over 100 people were destroyed on Israeli government orders. The Regional Council for the Unrecognized Villages in the Negev (RCUV) reported that at 9.30am two bulldozers, dozens of armed police, alongside demolition workers, entered the village at a time they knew men would be out at work.

Nothing was left standing. A broken down van which was used as shelter from the sun by the elderly was pulled down. Those who refused to move were physically dragged from their homes. When the son of one elderly man picked up fabric and a tent pole off the ground to create a new shelter for his father, he was arrested by police claiming he was about to attack them.

The residents of Twail Abu-Jarwal, an unrecognized village close to the government created township of Laqiya, have been struggling with Israeli authorities for residency rights for years. Approximately 70,000 Bedouin in the Negev are living in villages which Israel fails to recognize, thus preventing successful applications for building permits, and denying residents access to official state services which, as Israeli citizens, they should been titled to receive. Laqiya is one of several settlements built by Israel in the attempt to sedentarize Bedouin, cramming them into tiny overcrowded areas, denying a traditional agricultural lifestyle and failing to provide adequate alternative sources of income.

“This is the eighth time in the last two years they have come to demolish,” reported one villager, “It is the fourth time that they have flatten edit out completely”. Displacement of villagers of Twail Abu Jarwal, like other Bedouin villages in the Negev, is not a new phenomenon, but dates from the forced transfer of Arab populations in the 1950s under the military government of the new Israeli state.

Village Council head Aqil al-Talaqa has sat many times with various branches of the Israeli authorities, the Ministry of Interior, the Authority for the “Advancement” of the Bedouins, and the Israeli Lands Authority (ILA). It was suggested to him that the villagers move to another ‘temporary’ location while the government ‘contemplates’ what to do with the people, but al-Talaqa refuses, despairing of temporary solutions. As the RCUV points out, Bedouin were told that the original displacement of 1952 would be temporary and they have been pushed around for over half a century ever since.

Reporting the demolition, the Israeli daily Ha’aretz sought a response from the ILA to be told that the Authority had merely ‘evacuated’ Bedouin ‘invasions’. “These invasions have take place for the seventh time this year, to the same place,’ said an ILA spokesperson, “the invaders have homes in Laqiya”. According to the RCUV however, despite sheltering in the vicinity of Laqiya, the Bedouin families have not received building permits since originally being allocated plots back in 1978.

Two weeks later, 21 May, the Israeli government gave the go ahead for the destruction of four properties in the village of Attir, north of the township of Hura, in an area currently scheduled for another Jewish only Negev settlement. Forty children and their parents made homeless as hundreds of police arrived with bulldozers and even helicopter cover. Members of the Abu Alqian family were trapped by checkpoints and forced to witness the destruction of their homes, powerless to do anything about it.

Earlier this year, Adalah, the Legal Center for Arab Minority Rights, called upon PM Ehud Olmert and his deputy Shimon Peres to abandon ‘Negev 2015: The National Strategic Plan for the Development of the Negev (Naqab), accusing the government of discriminating against Arab Bedouin citizens and basing its plans for the region on illegal governmental policy. The government plan claims to promote development and growth in population, employment and education for citizens of the Negev – a budget of $80 million (US) has been set aside for 2007. However reality shows that marginalized Bedouin are to be further sidelined by development. Almost all the 75,000 housing units planned are designated for Jewish towns and communities.

The RCUV knows that they have a long struggle ahead of them. The committee has announced to the media that it is planning to establish a refugee camp in front of the Knesset as a symbol of protest for the 42,000 Bedouin homes threatened with demolition by Israeli plans. Hasan Rafay’ah, head of the committee called on all residents and civil society institutions to join the activity.

Isabelle Humphries is completing her doctoral research on Palestinian internal refugees in the Galilee – This email address is being protected from spambots. You need JavaScript enabled to view it.

More in this category: « A Tale of Two Generations An injustice to the injustice »
back to top