The Power of Memory 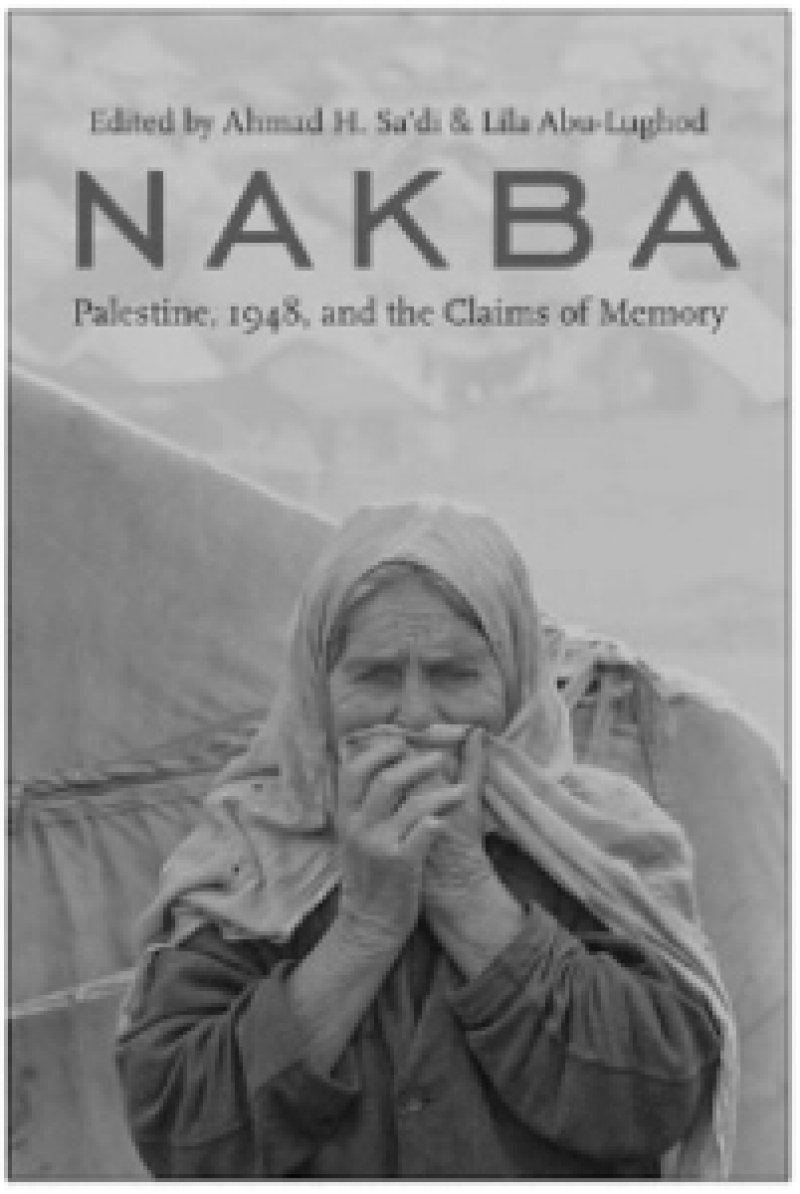 Our new book, Nakba: Palestine, 1948, and the Claims of Memory is about what 1948 has meant for Palestinians, as refracted through their memories, individual and collective, rendered public through being elicited by researchers and grandchildren, volunteered creatively, or presented in conventionalized memorial practices. The essays by a group of established and emerging scholars, all of whom are doing research on Palestinian memory, contribute important material to the ongoing historical reconstruction of the events of 1947 and 1948 and supplement the careful oral historical work that is being done by Palestinian research centers.

ut that is not the main purpose of this book. We are less concerned about what these memories tell us about what happened in the past than what work memories do, and can do, in the present. Among the important work that memory does is to affirm identity, manage trauma, and make political and moral claims. We look especially at how memories are produced, when people are silent, when collective memory proliferates, and what forms Palestinian memories of the cataclysmic events of 1948 take, recognizing that no memory is pure or spontaneous.

Many people argue that the narratives, documents, and archives of history’s victors, as well as the realities they have imposed on the ground, are what, in the final analysis, count as historical truth. Yet the powerful cannot fully impose their will in defining historical events or in determining the readings of reality. Memory is one of the few weapons available to those against whom the tide of history has turned. It can slip in to rattle the wall of History. Palestinian memory is, by dint of its preservation and social production under the conditions of its silencing by the thundering story of Zionism, dissident history. Palestinians’ memories of the Nakba can be said to criticize the present in the name of a trauma forgotten by the world.

This book, with essays on such varied topics as the gender of nakba memory, the cumulative and repetitive quality of the narratives in the ongoing dispossessions, the deep meaning of places like Jaffa and destroyed villages like Qula or Deir Abban memorialized in books written by their former inhabitants, and the mourning work of films like those of Nizar Hassan, is not just a collection of individual testimonials or personal reflections. Instead, it is sustained examination of the nature, shapes, and determinants of Palestinian collective, social, or cultural memory. We analyze the forms and the politics of Palestinian discourses of the Nakba. And it is from the memories of ordinary Palestinians made public in a variety of contexts that we draw our conclusions about the larger significance of the Nakba. What ultimately emerges from the essays in this book about how Palestinians remember the Nakba is a strong sense of the claims that social memory makes about what happened in the past and what ought, morally, to be done in the present.

The Nakba was many things at once: the uprooting of people from their homeland, the destruction of the social fabric that bound them for so long, and the frustration of national aspirations. The Nakba is also an unsettling counter-memory: a constant reminder of failings and of injustice. It is a challenge to the morality of the Zionist project; a reminder of the failures of Arab leadership and peoples; and a persistent question to the world about its vision of a moral and just human order.

For Palestinians, the Nakba was mostly about fear, helplessness, violent uprooting, and humiliation. It stands for the unexpected and unstoppable destruction that left them in disarray, politically, economically, and psychologically. The Nakba meant the destruction in a single blow of all the worlds in which Palestinians had lived. For many, theirs was a dynamic, prosperous and future-oriented society. The Nakba marked a new era dominated by estrangement, and often poverty. Nothing in their history or that of neighboring countries had prepared Palestinians to imagine such a catastrophe. The fact that the Nakba took place within a short period—a matter of months – made it hard to comprehend; there was little time to reflect.

Yet this shattering experience has not, until recently, been the subject of much scholarship by Palestinians. Nor has it found wide sympathy or acknowledgment. How many people in the United States know why Palestinians feel such different emotions from Israelis on their “Independence Day” on May 15? Why they continue to struggle, sometimes violently? Even why they are there, in Israeli cities and on Israel’s moving borders, still provoking talk of “transfer.” The Palestinian presence is the odd note in an otherwise harmonious Israeli picture of themselves as a suffering Jewish people redeemed by their new homeland, or celebrating a normal national independence.

Some might fault the Palestinians for somehow having remained silent, for not having told enough of their story. Many of those people who experienced it have not been heard from. As part of the research for this book, one of the authors interviewed an elderly Palestinian woman in the Galilee whose Nakba story he had heard before. She had been in her early twenties when the Nakba took place. On one occasion, she recalled, “We [she and her mother] were crossing the Saffuriyya – Shafa `Amr road. We were spotted by an armored vehicle that opened fire on us. We ran into the fields; it was harvest season. I jumped into a haystack; the bullets flew very close to my head and face. I was very frightened so I covered myself completely with the hay.” She then lost her mother, and couldn’t find her or the rest of her family for twenty days. Then she talked about another disturbing experience of running across a group of murdered men, two of whom had once been neighbors. Each had a single bullet hole in the forehead. When asked why she had never told her Nakba stories in public, particularly since so little was known to the world about what happened in that period, she looked astonished and retorted, “How can those without lips whistle?”

What does it mean to say that Palestinians do not have lips with which to whistle? What prevented them from telling their stories? Scholars of collective memory and historians are well aware that people who undergo traumatic events produce belated memories; it can take victims a decade or more to be able to assimilate their experience and give it meaning and form. Others suggest that you need distance to be able to remember. Yet there is no distance for Palestinians. They are still living their dispossession; the trauma is ongoing. Fifty-nine years later, the Nakba is not over. A state of normality has not been achieved by either Palestinians or Israelis. Yet the main reason the story has not been told is that it has been silenced. The Palestinian narratives of the Nakba still struggle in the shadow of a much more powerful international narrative—the Zionist one.

Although our emphasis in the book is on the ways Palestinian memories are narrated and represented, the cumulative effect of the memories we have collected and analyzed in this book is to affirm that some thing terrible happened to the Palestinians as a direct result of the military and political will to create the state of Israel. If only a fraction of what people in these pages tell us is true, their stories must slip through the holes in the wall of the dominant story of 1948 and open it up to questioning, both factual and moral. Like the wall that, though declared illegal by the International Court, is now being erected to keep Palestinians out of Israel, in the process confiscating more of their land and making their lives on the ground even less viable, the Israeli narrative needs to be dismantled. Palestinian memories of 1948 offer a way to begin-a beginning that might lead, through acknowledgment of what happened, to a better future, one that is not based on hardened identities, silencing of Palestinians, and continuing violence.

Ahdaf Soueif says of the book: “Nakba provides crucial insights into the Palestinian-Israeli situation yesterday, today, and, perhaps, tomorrow. This is a voice which needs to be heard by everyone interested in resolving this conflict. ”W. J. T. Mitchell, Professor at the University of Chicago says, “The catastrophic expulsion of the Palestinian people from their homeland in 1948 is a historic injustice that demands the attention of the entire world. Americans, Israelis, and Jews in every nation must especially give heed to this astonishing collection of masterful essays. Far from being a melancholy assemblage of anger and self-pity, this book is a major political and scholarly achievement, reflecting deeply on the traumatic roots of national identity, the role of memory and amnesia, history and mythical narrative, legal doctrine and eyewitness testimony, women’s experience, men’s business, and lost places found again in song, story, and film. This is essential reading for anyone who longs for a just settlement to ‘the question of Palestine,’ the question of the Middle East, or, indeed, the establishment of a world order of peace and justice.”

Ahmad H. Sa’di is a senior lecturer in the Department of Politics and Government at Ben-Gurion University of the Negev. He has published widely on political, social, and economic aspects of the lives of Palestinians in Israel.

Lila Abu-Lughod is professor of anthropology and gender studies at Columbia University. Her books include “Veiled Sentiments: Honor and Poetry in a Bedouin Society”, “Writing Women’s Worlds: Bedouin Stories”, and “Dramas of Nationhood: The Politics of Television in Egypt”.

More in this category: « “We will replant these trees again” A Tale of Two Generations »
back to top