“We will replant these trees again” 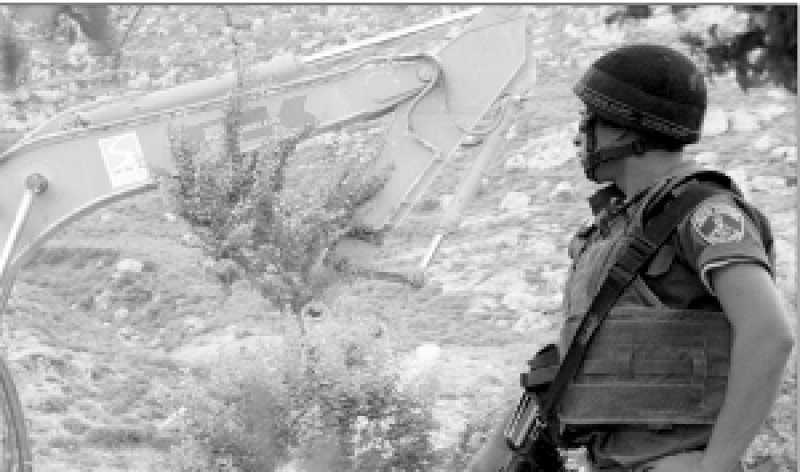 Visitors of Artas are amazed by the beauty of this small village located South-East of Bethlehem. Artas is renowned for its water sources and fertile lands that run throughout the valley covered by greenhouses and trees. It has around 4,000 inhabitants and hosts and annual Lettuce Festival. Artas, however, is also located close to the ever-expanding Gush Etzion settlement bloc and the route of the Wall. Last year, construction started on the hills surrounding Artas. In May this year, inhabitants discovered with concerns that the bulldozers were moving increasingly down, in the direction of the valley. The first land threatened with confiscation and destruction was a plot covered with beautiful apricot trees belonging to the Abu Sway family.

Unofficial information was disclosed to the family according to which the land would be confiscated and all the trees uprooted in order to build a sewage facility for the nearby settlements. It has also become increasingly obvious that the Wall would be built in this location. Construction of the illegal Wall and its associated regime, combined with the expansion of the settlements at the mouth of the valley and surrounding hills, will be a disaster for the whole village of Artas. It will not only entail more confiscation and pollution of agricultural lands, but also the destruction of a beautiful landscape and important natural heritage.

In May 2007, Awwad Abu Sway, together with other inhabitants from the village, launched an urgent appeal to Palestinians and internationals in order to try to prevent the confiscation of the lands. On May 18, the Israelis put an electric generator next to the Abu Sway family land in order to better control the site with big spot lights. Meanwhile, tents were organised, and for nights international activists together with Palestinians and Israelis slept under the threatened trees, despite repeated visits and harassment by Israeli soldiers.

On May 20, at 5.30 am, around 40 Israeli soldiers arrived at the site, removed the tents, violently pushed away the people and even threw them over a wall into an adjacent field. Then the bulldozer came to uproot all the trees, while the people continued to protest against this blatant injustice. As the trees were being uprooted, Awwad kept repeating to the soldiers: “I promise you, we will replant these trees.”

Four Israelis were apprehended. In two hours, the field became a desolate landscape with holes instead of trees.

The Palestinian villagers sat down in silence under the burning sun in the destroyed field as a sign of protest and defiance. And indeed, the story of Artas was far from over. The very same afternoon, the inhabitants tried to replant some trees but were beaten by the soldiers. The next day a march of protest was organised. The private guards on the site reacted violently and started to shoot at the journalists. As the demonstrators were peacefully going back to the village, Israeli soldiers chased them, and brutally arrested three Palestinians, including Awwad. They were released five days after.

Since then, the demonstrations, as well as legal proceedings, continue in Artas. The soldiers have repeatedly prevented the people of Artas from reaching their lands in the close vicinity of the new installations. While international media attention is focused on the internal Palestinian conflict, the Israeli authorities continue to create facts on the ground in the occupied Palestinian territories through construction of the Wall and the expansion of colonies on Palestinian lands; there is no international protest. Construction of the Wall is going fast. Currently a big structure with concrete and steal has been erected on the field of the Abu Sway family, and the bulldozers are continuously working in the valley and the surrounding hills.

Together with the demonstrations in Um Salomona against the construction of the Wall and confiscation of Palestinian lands, Artas has become an other symbol of non-violent resistance against the Israeli policies of colonization. Although the trees have been uprooted, the spirit of resistance has not.

Anne Paq is a photographer and the coordinator of a photo and video project at al-Rowwad in Aida camp.

More in this category: « Photo Exhibition of Activestills The Power of Memory »
back to top