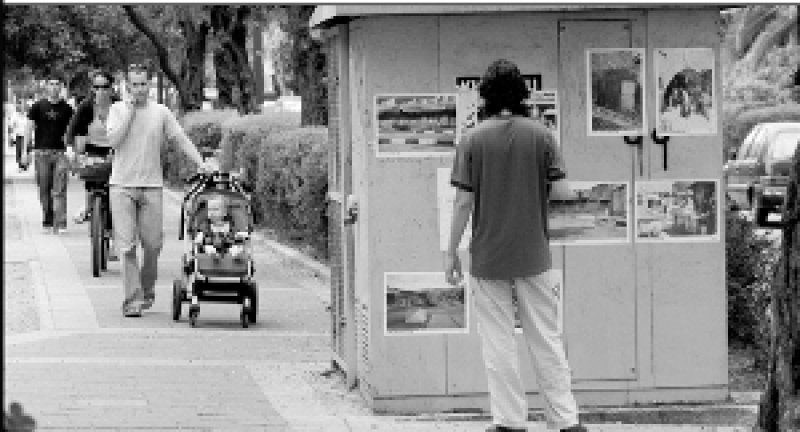 On Thursday morning, 10 May 2007, the inhabitants of Haifa, Jerusalem and Tel Aviv, woke up to find some walls of their cities covered with photographs of the kind they are not used to seeing. Over night, some 1600 pictures representing 40 copies of the photo exhibition “40 to 67” had been hastily put on more than 200 walls in the streets by dozens of volunteers.  Since then the photos have been exhibited on many other occasions and events, on Israel’s Wall in Anata and in Aida refugee camp, as well as during demonstrations and events against the occupation in Israel and in various countries of the world.

Activestills’ photo exhibition 40 to 67 concentrates on four cities (Gaza, Bethlehem, Jerusalem and Hebron) occupied by Israel since the war of 67, which is still perceived as one of the great “victories” of Israel. The exhibition confronts the general perception of the Israeli public with the reality of 40 years of occupation of the West Bank and Gaza Strip, and raises the question as to whether it truly was a victory.

Who are those who still pay the price? As victory celebrations are held in Israel, the only narrative is that of the greatness and heroism of the state, while in fact settlements continue to expand on Palestinian lands whose owners have been expelled. Millions of people live in a reality of imprisonment, oppression, dispossession, humiliation and denial of basic human rights. That reality is a mirror to Israeli society, an image it refuses to see. Those are the achievements of the war. Reactions by the Israeli pubic have varied, between apathy and efforts to rip off the exhibition. However, some people stopped, watched and scribbled messages and remarks.

The exhibition was organized by Activestills collective which was established in 2005 by a few documentary stills photographers, out of the strong conviction of photography’s power to create change through awareness. The collective’s members view themselves as a part of the struggle against any form of oppression, racism, and violation of the basic right to freedom. The Activestills collective operates in Israel and occupied Palestine and focuses on social and political documentation: project production, publications, and street exhibitions, all dealing with issues that the public is usually not exposed to in its daily informative routine as dictated by the established media.

The use of public spaces as a platform aims at reaching, in a direct way, the wider number of people in the streets where the power to make real social changes exists. In addition, the group is working continually with peace and human rights organizations and movements in Israel and occupied Palestine, as a part of the joint struggle against the occupation. Their photographic projects and daily journalistic works are published on internet news sites and in printed media around the world.

The exhibit, which was assembled from the works of Israeli, Palestinian and International photographers is being displayed in cities in Israel and occupied Palestine as well as in Europe and the United States. The photographer are: Anne Paq, Keren Manor, Mohammed Abed, Nir Landau, Nayef Hashlamoun, Oren Ziv, Tess Scheflan, Wissam Nassar,Yotam Ronen. Activestills.org The principle is to make the exhibit widely available through direct downloading from internet. If you are interested to present it to your community please send an email to This email address is being protected from spambots. You need JavaScript enabled to view it..

More in this category: « A Call for New Vision and Strategies “We will replant these trees again” »
back to top