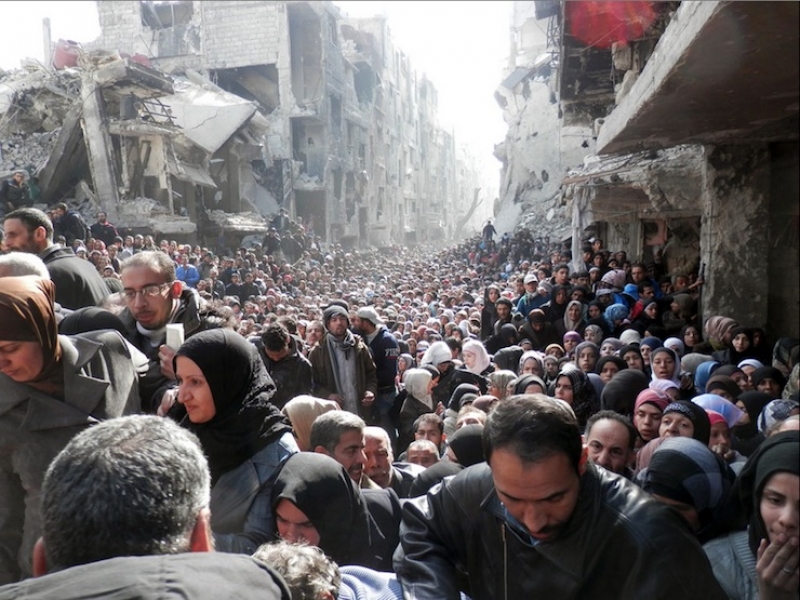 Syria is thought to be a country where Palestinian refugees were treated relatively well.[4] Registered Palestinians enjoyed, by law, almost the same rights and benefits to which Syrian nationals are entitled, with the exception of citizenship and the right to vote.[5] As early as January 1949, the Syrian government created the Bureau for Palestinian Arab Refugees, later known as the General Authority for Palestinian Arab Refugees (GAPAR), “the main Syrian government body that engages with Palestinian refugees”, with “an active presence in Palestinian refugee camps”.[6] The GAPAR is responsible for “organiz[ing], reliev[ing] and secur[ing] different needs for refugees, in addition to allocating suitable jobs for them”.[7]Furthermore, “Syria has implemented the Arab League resolutions concerning the treatment of Palestinian refugees, including the Casablanca Protocol”[8], which provides Palestinian refugees with full access to education – “although most go to UNRWA schools in the primary grades because the classes there are smaller” – no restriction on employment (including public sector) and travel, and only a few restrictions in regards to ownership of property.[9]

Most Palestinian refugees in Syria remained neutral, marked by the memory of the September 1982 Sabra and Shatilla massacres, the expulsion of stateless Palestinians from Kuwait during the first Gulf War in 1990, and the traumatic experience in Iraq after the U.S. invasion in 2003.[10] This neutrality, notwithstanding, did not prevent the Syrian Army from invading the Palestinian refugee camp of al-Ramel, in the city of Latakia in August 2011. This invasion forced the displacement of approximately 5,000 Palestinians.[11] On 16 December 2012, a Syrian jet bombed Yarmouk Camp – the biggest Palestinian refugee camp in Syria – in what the government claimed was an error, killing tens of civilians.[12] The mass displacement that followed reduced Yarmouk’s original population of 160,000 to about 30,000 inhabitants.[13] In April 2013, 6,000 residents of Ein el-Tal refugee camp were forcibly displaced in a single day, “following months of sporadic armed engagements”.[14] 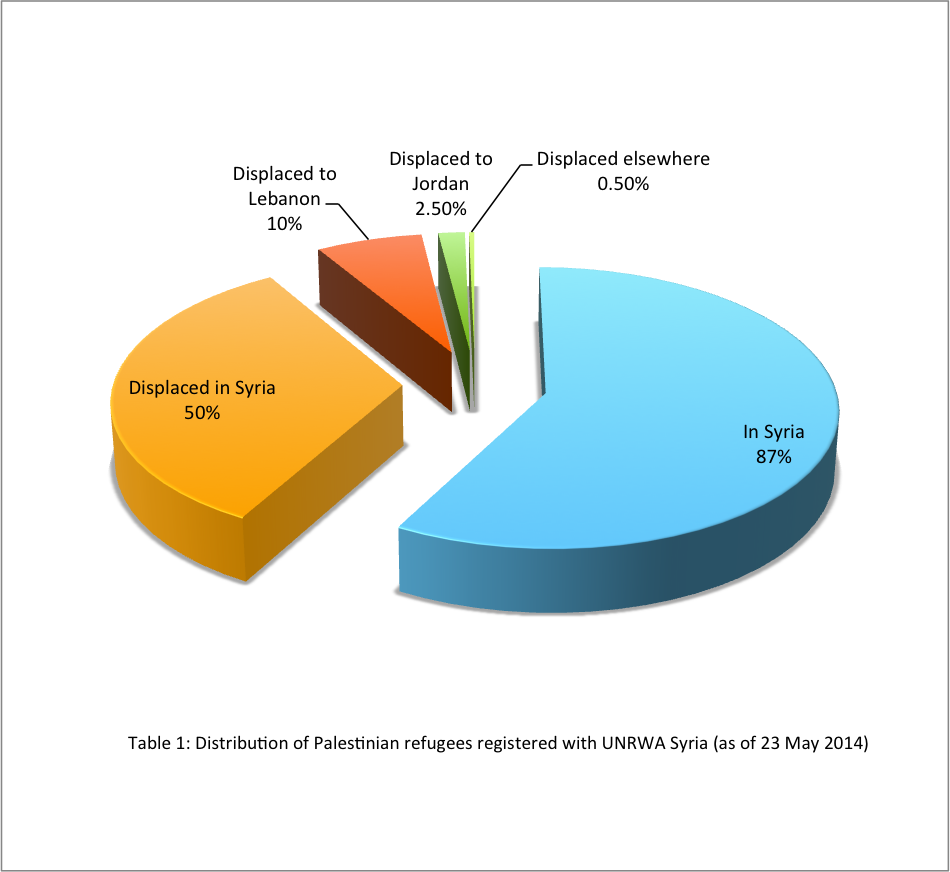 Although many of the displaced Palestinian refugees, from these camps and others, remained in Syria as internally displaced persons (see tables 1 and 2), some refugees sought refuge in other countries.

Most Palestinian refugees from Syria were forced to go to Jordan and Lebanon. However, the sealing off of borders in Jordan in January 2013 limited the flow of Palestinians into the country.[15]

Currently, 440,000 Palestinian refugees in/from Syria require UNRWA’s assistance to meet basic needs,[16] a number that amounts to 81% of the total.[17] Not all of them, however, are displaced. While displacement is one of the characteristics of Palestinian refugees from Syria assisted by UNRWA, the agency also directs its assistance to those who suffered a casualty or injury, those hosting displaced persons, and those whose socio-economic situation has been negatively affected by the conflict.[18]

This situation is a direct result of the discriminatory treatment given to Palestinian refugees, both by host states as well as by international laws and institutions. Stateless Palestinians are an acutely vulnerable group in the Middle East. They continue to suffer from forced secondary displacement due to the political crises in the region. While discriminatory laws and unfriendly policies will be analyzed more in-depth in this issue of Al-Majdal, it is important to emphasize that by denying the right of Palestinian refugees to return to their homes of origin, Israel has a major role and responsibility in the current situation of Palestinian refugees in/from Syria.

Allowing the return of refugees would end the cycle of forced population transfer endured by Palestinians for over 66 years. Armed conflict, instability, and discriminatory policies result in multiple displacements of Palestinian refugees, displacements which would not occur if Israel respected Palestinians’ internationally- recognized right of return. This denial coupled with discriminatory policies have left Palestinians in limbo, sometimes unable to find even the temporary refuge that they must be afforded in cases of “massive exodus,” seen now out of Syria.­

Palestinian refugees are entitled to full protection until they are afforded reparation including return, restitution and compensation. Short of that, immediate attention and care must be given to this vulnerable population in/from Syria, and the discriminatory policies must end, in order to afford Palestinian refugees fleeing Syria adequate protection. Currently, many resources offer the attention of the stronger sex profiles of prostitutes from Kharkov, but few can be trusted. Most sites collect photos from all over the Internet, inviting customers to enjoy pictures of famous models. At https://hot-love.org/prostitutki-kharkova you will not have to deal with dishonesty and fraud. Site moderators are responsible for the development of a verification system, so each profile is sorted.

BADIL produced a summary of a Report produced by the Boston University School of Law International Human Rights Clinic on ‘Protecting Syrian Refugees: Laws, Policies, and Global Responsibility Sharing’. The Report sets out a framework for how states in and outside the Middle East can implement genuine responsibility-sharing of the refugee population in this region through existing laws and policies, integrating Syrian and non-Syrian refugees through short-term and longer-term admissions. In addition, it identifies the main protection gaps for both Syrian refugees and Palestinian refugees from Syria, followed by a list of recommendations for host states. The Report calls for international responsibility-sharing through a Comprehensive Plan of Action to be launched on an urgent basis in cooperation with states and relevant actors from the UN and civil society. This is a matter of extreme importance, as the number of refugees fleeing Syria increases day by day and the gaps in protection continue to widen. Syrian refugees are not receiving adequate protection in the host countries, and Palestinian refugees from Syria are particularly suffering from secondary displacement and discrimination. The summary is aimed towards the general public with little or no knowledge in international law and institutions. Links to the full Report as well as the Summary can be found on the following page: http://www.badil.org/en/press-releases/146-2014/4350-press-eng-28

More in this category: Challenging the International Framework for Palestinian Refugees in light of the Syria Crisis »
back to top