Zionism: A Root Cause for Ongoing Population Transfer of Palestinians 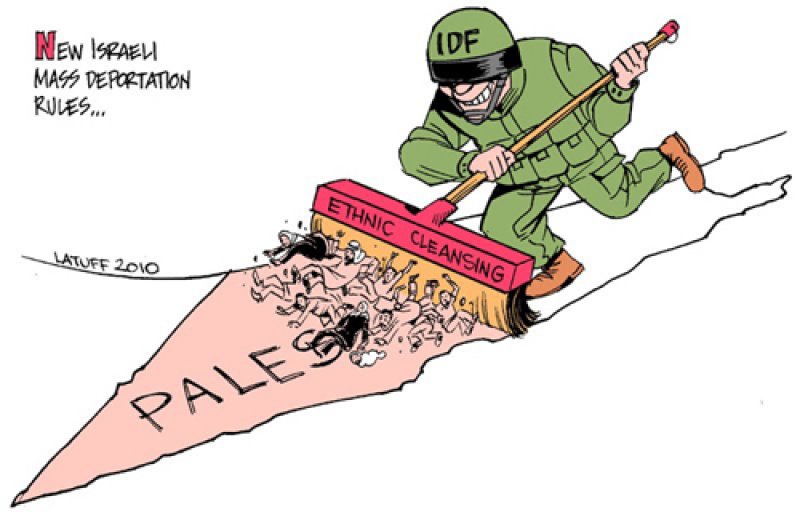 In 1973, The United Nations rightfully condemned ‘the unholy alliance between Portuguese colonialism, South African racism, Zionism and Israeli imperialism.’1 And only two years later the same international organization determined ‘that Zionism is a form of racism and racial discrimination.’2 Although this resolution was revoked in 1991, at the behest of the U.S. administration, in order to pave the way for the Madrid Peace Conference that same year, the equation of Zionism with racism is still valid. Apartheid is based on the principle of the establishment and maintenance of a regime of institutionalized discrimination in which one group dominates others. In the case of Israel, the driving-force behind the Palestinian reality of apartheid is Zionist ideology; its manifestation is population transfer and ethnic cleansing.

The Zionist Movement was formed in the late Nineteenth century with the aim of creating a Jewish homeland through the formation of a ‘national movement for the return of the Jewish people to their homeland and the resumption of Jewish sovereignty in the Land of Israel.’3 As such, the Zionist enterprise combined the Jewish nationalism which it aimed to create and foster, with the colonialism of transplanting people, mostly from Europe, into Palestine with the support of European imperial powers. Jewish history was interpreted towards constructing a specific Jewish national identity in order to justify the colonization of Palestine. As Ilan Pappe rightly concludes, however, “Zionism was not… the only case in history in which a colonialist project was pursued in the name of national or otherwise non-colonialist ideals. Zionists relocated to Palestine at the end of a century in which Europeans controlled much of Africa, the Caribbean, and other places in the name of ‘progress’ or idealism…”4 What is unique to Israel, however, is the effect of Zionism on the people it has claimed to represent. By basing itself on the idea of Judaism as a national identity, adherents of the Jewish faith around the world would become, as per Israeli law, Jewish “nationals,” whether or not they accepted said classification. To date, Israel continues to be the only country in the world that defines its citizenry extra-territorially.

The creation of a Jewish nation state in a land with a very small Jewish minority could only be conceivable through the forced displacement of the existing indigenous population alongside the implanting of the new Jewish settlers. For the indigenous Palestinians who managed to remain within the boundaries of what became Israel, their own national identity was relegated to inferior status. Article 2 of the State Education Law, for example, states that “the objective of State education is… to educate each child to love… his nation and his land,… [to] respect his… heritage, his cultural identity… to impart the history of the Land of Israel… [and] to teach… the history of the Jewish People, Jewish heritage and tradition…”5 Beyond being subject to institutionalized discrimination, these Palestinians who managed to remain within the part of Palestine usurped in 1948—of whom today there are over 1.2 million—are forced to be citizens of a state in which they are ineligible for nationality.

As mentioned above, however, the main manifestation of Zionist apartheid has been population transfer. The task of establishing and maintaining a Jewish state on a predominantly non-Jewish territory has been carried out by forcibly displacing the non-Jewish majority population. Today, nearly 70 percent of the Palestinian people worldwide are themselves, or the descendents of, Palestinians who have been forcibly displaced by the Israeli regime.6 The idea of “transfer” in Zionist thought has been rigorously traced by Nur Masalha in his seminal text Expulsion of the Palestinians: The Concept of “Transfer”in Zionist Political Thought, 1882-1948, and is encapsulated in the words of Israel Zangwill, one of the early Zionist thinkers who, in 1905, stated that “if we wish to give a country to a people without a country, it is utter foolishness to allow it to be the country of two peoples.”7 Yosef Weitz, former director of the Jewish National Fund’s Lands Department, was even more explicit when, in 1940, he wrote that “it must be clear that there is no room in the country for both people (...) the only solution is a Land of Israel, at least a western Land of Israel without Arabs. There is no room here for compromise. (...) There is no way but to transfer the Arabs from here to the neighboring countries (...) Not one village must be left, not one (Bedouin) tribe.”8 Rights and ethics were not to stand in the way, or as David Ben-Gurion argued in 1948, “the war will give us the land. The concepts of ‘ours’ and ‘not ours’ are peace concepts, only, and in war they lose their meaning.”9

The essence of Zionism, therefore, is aptly summarized as the creation and fortification of a specific Jewish national identity, the takeover of the maximum amount of Palestinian land, ensuring that the minimum number of non-Jewish persons remain on that land and the maximum number of Jewish nationals are implanted upon it. In other words, Zionism from its inception has necessitated population transfer notwithstanding its brutal requisites and consequences.

Based on one of the ultimate aims of Zionism—the forcible transfer of the indigenous Palestinian population beyond the boundaries of Mandate Palestine—many Israeli laws, policies and state practices as well as specific actions of para-state and other private actors have been developed and applied. This forcible transfer or ethnic cleansing started even prior to 1948 and is still ongoing today.

The idea of transfer did not end with the establishment of Israel in 1948. Between 1948 and 1966, various official and unofficial transfer plans were put forward to resolve the “Palestinian problem”. These included plans to resettle Palestinian refugees… [and the] establishment [of] several transfer committees during this period. The notion of population transfer was raised again during the 1967 war… and similar proposals for population transfer also emerged during and after the second intifada [in 2000].10

According to the Sub-Commission on Prevention of Discrimination and Protection of Minorities of the former Commission on Human Rights,The essence of population transfer remains a systematic coercive and deliberate… movement of population into or out of an area… with the effect or purpose of altering the demographic composition of a territory, particularly when that ideology or policy asserts the dominance of a certain group over another.11

This ethnic cleansing, today, is carried out by Israel in the form of the overall policy of “silent” transfer and not by mass deportations like in 1948 or 1967. This displacement is silent in the sense that Israel carries it out while trying to avoid international attention by displacing small numbers of people on a weekly basis. It is to be distinguished from more overt transfer achieved under the veneer of warfare in 1948. Here it is important to note that Israel’s transfer policy is neither limited by Israel’s geographical boundaries nor those of the occupied Palestinian territory (OPT). Israel is in essence treating the territory of Israel and the OPT as one legal entity.

The Israeli policy of silent transfer is evident in the State’s laws, policies and practices. The most significant of these include: governance and enforcement of residency rights; land rights; regulation of natural resources; the application of justice; law enforcement; and the status of Zionist para-state actors. Israel uses its power in such areas to discriminate, expropriate and ultimately to forcibly displace the indigenous non-Jewish population from the area of Mandate Palestine. So for instance the Israeli land-planning and zoning system has forced 93,000 Palestinians in East-Jerusalem to build without proper construction permits because 87 percent of that area is off-limits to Palestinian use, and most of the remaining 13 percent is already built up.12 Since the Palestinian population of Jerusalem is growing steadily, it has had to expand into areas not zoned for Palestinian residence by the state of Israel. All those homes are now under the constant threat of being demolished by the Israeli army or police, which will leave their inhabitants homeless and displaced.

Another example is the government-approved Prawer Plan, which calls for the forcible displacement of 30,000 Palestinian citizen of Israel due to an Israeli allocation policy which has not recognized over thirty-five Palestinian villages, located in the Naqab (Negev).13 Israel deems the inhabitants of those villages as illegal trespassers and squatters, and are therefore, facing the imminent threat of displacement, This despite the fact that in many cases, these communities predate the state of Israel itself.

The Israeli Supreme Court bolstered the Zionist objective of clearing Palestine of its indigenous population in its 2012 decision prohibiting family unification between Palestinian-Israelis and their counterparts across and beyond the Green Line. The effect of this ruling has been that Palestinians with different residency statuses (such as Israeli citizen, Jerusalem ID, West Bank ID or Gaza ID—all issued by Israel) cannot legally live together on either side of the Green Line. They are thus faced with a choice of living abroad, living apart from one another, or taking the risk of living together illegally.14 Such a system is used as a further means of displacing Palestinians and thereby changing the demography of Israel and the OPT in favor of an exclusive Jewish population. This demographic intention is reflected in the Court’s reasoning for its decision, where it stated that “human rights are not a prescription for national suicide.”15 This reasoning was further emphasized by Knesset-member Otniel Schneller who stated that “the decision articulates the rationale of separation between the [two] peoples and the need to maintain a Jewish majority… and character…”16 This illustrates once more the Israeli state’s self-image as an exclusively Jewish state with a different set of rights for its Jewish and non-Jewish, mainly Palestinian, inhabitants.

All the different means with which Israel triggers the displacement of Palestinians are linked to the central concept of Jewish nationality as it is the legal mechanism that enables and guarantees the constant discrimination against the non-Jewish population. This same concept is the link between Zionism and the constructed “right” of the Jewish nation to settle and occupy the territory of Mandate Palestine. In other words, the concept of Jewish nationality is the lynchpin of the Israel’s regime of apartheid as it addresses both aims of Zionism: the creation and maintenance of a specific Jewish national identity, and the colonization of Mandate Palestine through the combination of Jewish settler implantation and the forcible transfer of all non-Jewish inhabitants.

The way this concept is embodied in law is through the separation, unique to Israel, of citizenship (Israeli) from nationality (Jewish), a separation confirmed by the Israeli Supreme Court in 1972.17 This separation has allowed Israel to discriminate against its Palestinian citizens and, even more severely, against Palestinian refugees by ensuring that certain rights and privileges are conditional upon Jewish nationality. The main source of discrimination against Palestinian refugees originate from the Israeli Law of Return 1950 and the Israeli Citizenship Law 1952 which grants automatic citizenship to all Jewish nationals, wherever they reside, while simultaneously preventing Palestinian refugees from returning to, and legally residing in, that territory. The Israeli regime has basically divided the Palestinian people into several distinct political-legal statuses as shown in the figure below. Despite their differing categorizations under Israeli law, Palestinians across the board maintain an inferior status to that of Jewish nationals living within the same territory or beyond:

The international community judged the South African apartheid regime based on its racist ideology elements and its violations of international norms and standards. It is time to judge Israel similarly. The first significant step in that direction would be reinstating United Nations General Assembly Resolution 3379 of 10 November 1975 declaring Zionism as a form of racism, and paving the way for the end of Israeli impunity and apartheid.

More in this category: « The Forcible Transfer of the Palestinian People from the Jordan Valley The BADIL-Zochrot Study Visit to Cape Town: An Introduction »
back to top