BDS Campaign National Committee
Israel and the Crime of Apartheid: The Vision of the Anti-Apartheid Struggle (Issue No.48, Winter 2012) 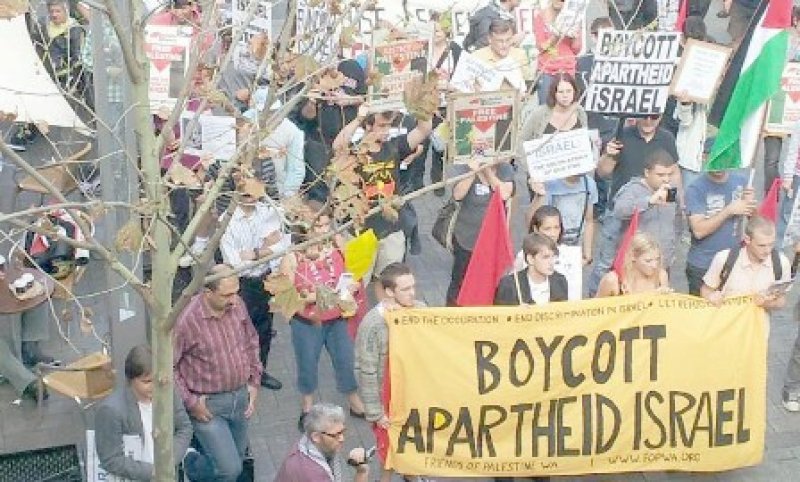 21st October 2011 - 350 student activists from more than a hundred schools across the nation converged for the first-ever Students for Justice in Palestine (SJP) national conference. The conference was structured around workshops ranging from “The Economics of Israeli Colonialism” to the “Politics of Women’s Activism” to “How to Effectively Start and Run an SJP Group.” The result of a year of student planning, organizing and fundraising, the SJP gathering comes at a moment when Palestine solidarity activism on college campuses is increasingly scrutinized. The aims of the “Students Confronting Apartheid” conference, activists said, were to strengthen the student movement for Palestinian rights and develop a better political understanding of the situation in Palestine. SJP activists convened in separate “movement building” workshops to create proposals for a national structure to better coordinate and share resources, though activists said individual chapters would remain autonomous

Edinburgh University Students Vote to Ban G4S
26th October 2011 - In a victory for the Palestinian Boycott Divestment and Sanctions (BDS) movement, Edinburgh University Student Association (EUSA) overwhelmingly passed a motion through its Student Council to block their contract with security firm G4S, and to lobby the University to follow suit. G4S currently provide security services to Edinburgh University library, which prompted Students for Justice in Palestine (SJP) to begin a campaign to force the University to tear up its contract with the security firm. It was then recently discovered that EUSA were also in the process of hiring the firm for money collecting services. This led to a motion quickly going before Student Council and it was clearly passed, meaning the Union’s trustee board must now look for an alternative.


Cambridge University students vote to break contract with Veolia
26th October 2011 - Students at Cambridge University in the UK have voted to call on the University to cut ties with a company implicated in Israeli human rights abuses. The vote calls on CUSU (Cambridge University Students Union) to campaign to have the University cut ties with Veolia, a company involved in infrastructure projects in Israeli settlements, and employed by the University on a waste disposal contract. The referendum, which closed yesterday, passed with a majority of 58% to 41%: there were 898 votes yes, 637 votes no, and 21 ballots spoilt. While a strong majority was in support, the referendum was inquorate: 7.2% of the student body voted, short of the 10% required. Students involved in the campaign pledged to continue the campaign to ensure that Veolia’s contract, which expires in September 2012, is not renewed.


New Book calls for direct action against British companies complicit in Israeli apartheid
27th October 2011 - Corporate Watch has released a book, Targeting Israeli Apartheid: A Boycott Divestment and Sanctions Handbook, encouraging campaigners to take direct action against the British companies complicit in Israeli apartheid, militarism and colonization. The book, based on extensive research in Palestine and the UK, and interviews with Palestinian and Israeli campaigners, takes its cue from the unified Palestinian call for Boycott Divestment and Sanctions (BDS). The book begins by examining the Israeli economy, industry by industry, and suggesting where the movement should focus its campaigning energy in order to be most effective. Part two contains five in-depth geographical case studies. The final section looks at how campaigners can bring the fight home to the UK


BDS Victory: Alstom loses Saudi Haramain Railway contract worth $10B
27th October 2011 - The BDS National Committee (BNC) has declared a long sought-after victory as Alstom lost the bid for the second phase of the Saudi Haramain Railway project, worth $10 billion US dollars, after pressure from the global Boycott, Divestment and Sanctions (BDS) campaign, including effective campaigning from the newly launched KARAMA, a European campaign to Keep Alstom Rail And Metro Away. In 2008 the BNC, the largest Palestinian civil society coalition, with partners in Europe and Israel, launched the Derail Veolia and Alstom campaign, due to the two companies’ involvement in Israel’s illegal Jerusalem Light Rail (JLR) project, which explicitly aims to “Judaize Jerusalem,” according to official Israeli statements, by cementing Israel’s hold on the illegal colonial settlements built on occupied Palestinian land in and around Jerusalem. Since then, Veolia has lost more than $12B worth of contracts following boycott activism in Sweden, the UK, Ireland and elsewhere. Alstom, too, suffered substantial blows when the Swedish national pension fund AP7 excluded it from its investment portfolio, after having been excluded from the Dutch ASN Bank due to the company’s involvement in Israel’s occupation of Palestinian land, and has recently announced its intention to withdraw from the project. The BNC and several partners have used private and public channels to urge the Saudi leadership to exclude Alstom from the second phase of this large project which will connect by rail Mecca with Medina after Alstom had won the much smaller contract for the first phase.


BDS Victory against Eden Springs
31st October 2011 - Glasgow Caledonian Palestine Society are delighted that Eden Springs no longer provide water anywhere on our campus. Mayanot Eden (The Israeli parent company of Eden Springs UK) extract water from the Salukia spring and bottle in the illegal Israeli settlement of Katzrin, both in the illegally occupied Syrian Golan Heights. That Eden Springs UK and Eden Europe provide locally sourced treated water in no way absolves them of the crimes of the parent company and for us they are the same company.

Activists in France launch campaign against Mehadrin
22nd November 2011 - Activists in France launched the campaign against Mehadrin with a large demonstration outside the comapny’s French headquarters in Chateaurenard in the south of the country. In the wake of the collapse of Agrexco, Mehadrin has become Israel’s largest agricultural produce exporter. Mehadrin sources produce from growers in illegal settlements, exploits Palestinian workers and is deeply involved in the theft of Palestinian water

Protest and lobby held at Belgian Ministry of Economy
25th November 2011 - Ten activists from Belgian group Vredesactie held a visible picket outside the offices of the Ministry of Economy in the Brussels and held a lobby meeting with ministry officials as part of Take Apartheid off the Menu action day. The short conversation focused on the responsibility of the ministry to prevent settlement produce from entering the market in Belgium, and the activists handed over samples of settlement produce and a briefing document emphasizing the role settlement products play in facilitating settler attacks on Palestinians in occupied Palestinian territory.

BDS South Africa exposes JNF Greenwashing at COP 17
28th November 2011 - issued the following release about the Jewish National Fund and it’s attempt to ‘greenwash’ its racist practices and policies:
With COP17, the United Nations Climate Change Conference, taking place in South Africa we’ve been approached by several environmental justice organizations regarding the Jewish National Fund (JNF) and its presence at COP17.
The JNF potrays itself as a “green” organisation but at the same time it is involved in human rights abuses against the Palestinian people – including house demolitions and forced removals. Furthermore, the JNF administers 13% of Israeli land (which it does not allow Palestinians to use) and jointly (with the Israeli Land Authority, an Israeli government body) administers another 80%. Israeli land policies are discriminatory and the JNF is intimately involved (and complicit) in maintaining and administering these policies.


UK student body slams university’s Ahava link
30th November 2011 - A collaboration between King’s College London (KCL) and an Israeli company located in an illegal West Bank settlement has been condemned by the UK’s National Union of Students (NUS), in a significant boost for campaigners. In a meeting Monday night of the NUS’ National Executive Council (NEC), a motion demanding the “immediate end” of KCL’s research project with Ahava was passed with no votes against. The NEC motion, noting the “overwhelming” international position on the illegality of Israeli settlements, states that “by collaborating with Ahava, King’s itself has become complicit with violations of international law”.

Veolia Takes Severe Blow As It Fails To Win 485 Million Pound Contract In West London
December 23rd 2011 - Human rights campaigners are celebrating after the West London Waste Authority (‘WLWA’) excluded French multinational Veolia from a £485 million contract covering 1.4 million inhabitants of the London boroughs of Brent, Ealing, Harrow, Hillingdon, Hounslow and Richmond-upon-Thames, for treatment of residual domestic waste. The reasons behind the decision by the WLWA to exclude Veolia are commercially confidential but the impact of human rights campaigners should not be under-estimated.

Campaign launched against French purchase of Israeli drones
December 30th 2011 - French boycott, divestment and sanctions (BDS) campaigners have called on their government to abandon a €318 million deal to buy Heron TP drones from Israel Aircraft Industries. Meanwhile, senior members of France’s Senate have called publicly for the country to abandon the purchase on grounds that the Israeli drones are unsuited to the needs of the armed forces.

Report: Third National BDS Conference, Hebron, December 17
On 17 December 2011, Palestinians gathered in the city of Hebron in the occupied West Bank for the Third National Boycott, Divestment and Sanctions (BDS) Conference. The event took place against the backdrop of continuous Israeli violations of Palestinian rights, and a growing resistance against injustice worldwide as demonstrated by the Arab revolutions and the occupy movements. Just minutes away from the conference venue, 500 Jewish settlers live under escort of the Israeli military in a colonial enclave in the middle of old Hebron, terrorizing local Palestinian residents on a daily basis, with the stated intent of driving them from their homes. Hebron is also an important commercial center in Palestine, and thus was a fitting venue to hold the national BDS conference, after it was held in Nablus and Ramallah in previous years.
The day started early with about 500 Palestinians from all corners of the West Bank, as well as 48 Palestinians representing a diverse sector of civil society including trade unions, student and women groups, academics, cultural workers and NGOs, all uniting under the banner of BDS.
There was also a visible international presence as well as that of Israeli partners who have responded to the 2005 BDS call. Notable was the absence of representation from Gaza, under an Israeli imposed siege, and refugees outside historic Palestinian, although their contribution to the movement was acknowledged. Full report available at: http://www.bdsmovement.net/2012/conference-report-8583

More in this category: « Kairos Palestine: The Struggle Against the Israeli Apartheid System
back to top