Rifat Odeh Kassis
Israel and the Crime of Apartheid: The Vision of the Anti-Apartheid Struggle (Issue No.48, Winter 2012) 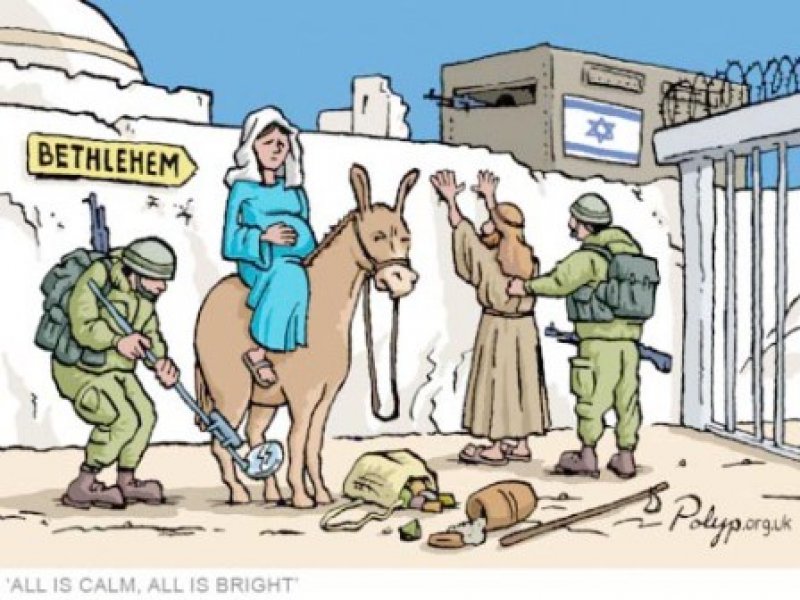 Kairos, then, tackles an intensely important and often neglected topic: Zionist hijacking of religious messages and of the Bible itself, all for the purpose of excluding other peoples and cultures from the land and their rights. Racism in Israel is not simply a question of laws, or even of measures taken on the ground. Beneath the movement restrictions, the house demolitions, the evictions, the residency revocations, the arbitrary arrests and interrogations, the administrative detentions, the imprisonment of children, and the violent repression of nonviolent protests, there are powerful undercurrents to be identified and understood: there is, in other words, an official Israeli discourse that monopolizes the history of the land and its people.

Israel heavily depends on the Biblical narrative to exert and uphold its claim to the land. With this narrative as its crutch, the state rhetoric focuses on the concept of purity: the purity of a religion (Judaism), the purity of the nation (an exclusively Jewish one), and the purity of race and ethnicity (the Jewish people). The Zionist narrative insists that all these “identities” have never been changed, transformed, or modified; that they have remained pure through all of history. According to this discourse, such purity inherently denies the very presence - not to mention the rights - of any other peoples in “their” land.

Clearly, Israel does not want to share the land - nor even to grant independence to Palestinians on part of the land. Their tactic has been one of slow, systematic oppression, the ultimate goal being to wear us out, and thus to drive us out: instead of directly transferring Palestinians out of the land, why not make life so difficult that we feel pushed to “transfer” ourselves? This strategy, and the mentality that supports it, forms the foundation of Israeli apartheid.

In the face of this situation and all its manifestations, Kairos Palestine has arrived to add a new voice, as well as new intellectual and theological tools, to the struggle against occupation. The Kairos narrative is an inclusive one: it seeks peace with justice for all peoples, both Israeli and Palestinian. Yet emphasizing the need for inclusivity and equality does not and must not preclude Palestinians’ rights to their country. This, too, is one of Kairos Palestine’s central calls. The document best speaks for itself:


• “We believe that our land has a universal mission. In this universality, the meaning of the promises, of the land, of the election, of the people of God open up to include all of humanity, starting from the peoples of land. In light of the teachings of the Holy Bible, the promise of the land has never been a political programme…” (2.3)
• “Our presence in this land, as Christian and Muslim Palestinians, is not accidental but rather deeply rooted in the history and the geography of this land, resonant with the connectedness of any other people to the land it lives in. It was an injustice when we were driven out.” (2.3.2)
• “…[W]e declare that any use of the Bible to legitimize or support political options and positions that are based upon injustice, imposed by one person on another, or by one people on another, transform religion into human ideology and strip the Word of God of its holiness, its universality and truth.” (2.4)
• “Love is seeing the face of God in every human being. Every person is my brother or my sister. However, seeing the face of God in everyone does not mean accepting evil or aggression on their part. Rather, this love seeks to correct the evil and stop the aggression.” (4.2.1)
• “Through our love, we will overcome injustices and establish foundations for a new society both for us and for our opponents. Our future and their future are one. Either the cycle of violence that destroys both of us or peace that will benefit both.” (4.3)

Of course, the task of changing a narrative and a mentality, and the task of changing actions and policy, are intimately intertwined. Thus, the Kairos Document also raises specific calls about how to end the apartheid system within Israel: necessary first steps towards the true achievement of justice.

In this way, Kairos Palestine calls for dismantling the physical components of the apartheid system: ending the construction of illegal settlements; ceasing the unjust separation of Palestinians from each other by means of bypass roads and the Apartheid Wall; allowing Palestinian access to Jerusalem; rectifying the wildly inequitable distribution of water resources between Israeli and Palestinian communities; and so on.

The Kairos Document also advocates BDS (boycott, divestment, and sanctions) until Israel ends its illegal occupation, complies with international law, and gives Palestinians their full legal, political, national and human rights. BDS is not an end unto itself: rather, it is a non-violent tool, designed to be implemented as long as Israel refuses to honor its obligations under universal human rights law and insists on upholding an illegal apparatus of oppression. By affirming this tactic, Kairos Palestine rejects violence and revenge, emphasizing peaceful ways of ending the occupation and strengthening international solidarity in the name of equality for all.

Kairos Palestine likewise calls for an end to unjust tourism to the Holy Land. The tourist industry in our country has been historically monopolized by Israel and its hegemonic religious and cultural discourse (earlier, I discussed Israel’s appropriation of the Bible and its dominant narratives of purity and claim), in such a way that tourism itself becomes an exclusionary political tool. Kairos Palestine rejects this exclusivity and manipulation. The Kairos Document issues a “Come and See” call, seeking to mobilize tourists as advocates and ambassadors by motivating them to undergo “Pilgrimages of Transformation” and apply the Code of Ethics developed by the Palestinian Initiative for Responsible Tourism.

Finally, the Kairos Document addresses the churches of the world, urging them to end their silence and double standards in the face of systematic injustice against Palestinians. We cannot accept any theological leadership that not simply justifies but also upholds the status quo; we can only accept that which seeks to embrace and empower the oppressed.

In order to put these convictions and positions into practice - and to transform this practice into strong, enduring collaborative efforts - Kairos Palestine has initiated and developed a broad range of events, activities and tools on local, national, and international levels. Among the key accomplishments are as follows:

First, Kairos Palestine is in the process of formulating a national Kairos movement, composed of young people; adults, both men and women; ecumenical and community-based organizations; and clergy. This movement will act as the voice of Palestinian Christians, working directly with other Christian organizations and churches as well as in coordination with many other national bodies, both faith-based and secular. It will be a movement based upon, and focused on, the steadfastness of Palestinian Christians, and will seek to enhance their overall role in the joint struggle for peace with justice.

Second, we are also establishing an international “Kairos for Global Justice” movement: the outcome of a recent conference held in Bethlehem. In this conference, 60 representatives from over 15 countries agreed to form a movement that will mobilize churches and Christian organizations to work for a just peace in the region. The movement will seek to support and strengthen BDS calls; end the blind loyalty of some churches to Israel, and end their silence in the face of oppression; and lobby such churches to stop investing in the occupation, whether directly or indirectly, of our land.

Third, Kairos Palestine is launching various kinds of campaigns, on both national and international levels, to lobby and advocate for the Palestinian cause. As part of these efforts, we are working to challenge the theological and political discourse adopted by some churches in ignoring or denying the Palestinian plight. Such campaigns include: working with supporters to boycott specific widely-used products; investigating investments made by some churches’ social funds and making inquiries into whether they are investing in Israel or in companies supporting the occupation; targeting church tour operators and questioning whether they are balanced in their presentations, affording sufficient time and money to the occupied Palestinian territory; and calling upon churches to allocate one day of the year for a “Day of Kairos,” distributing materials about what is occurring in Palestine and Israel and urging further solidarity.
And fourth, we are utilizing all available forums -- the Vatican, the World Council of Churches, other regional ecumenical bodies -- and urging them to exercise pressure on governments around the world, so that these governments, in turn, will pressure Israel to abide by international law.

True activism requires forms of thinking and action that are not merely revisionary but also generative. In other words, Kairos Palestine’s convictions about how to end Israeli apartheid exist not just to end, but also to create: to dig deeply around the roots of injustice; to pull them out; to plant the seeds of peace with justice in their place; and to cultivate and care for them together. Only with the total eradication of apartheid will we, as Palestinians and Israelis, be able to truly live. This, above all, is our goal.


Rifat Odeh Kassis is the General Coordinator of Kairos Palestine and the General Director of Defence for Children International - Palestine Section (DCI-PS).r

More in this category: « The Strategic Significance of the “Jewish state” in the Struggle for Palestinian Rights BDS Campaign Update(October - December 2011) »
back to top