However long it takes… 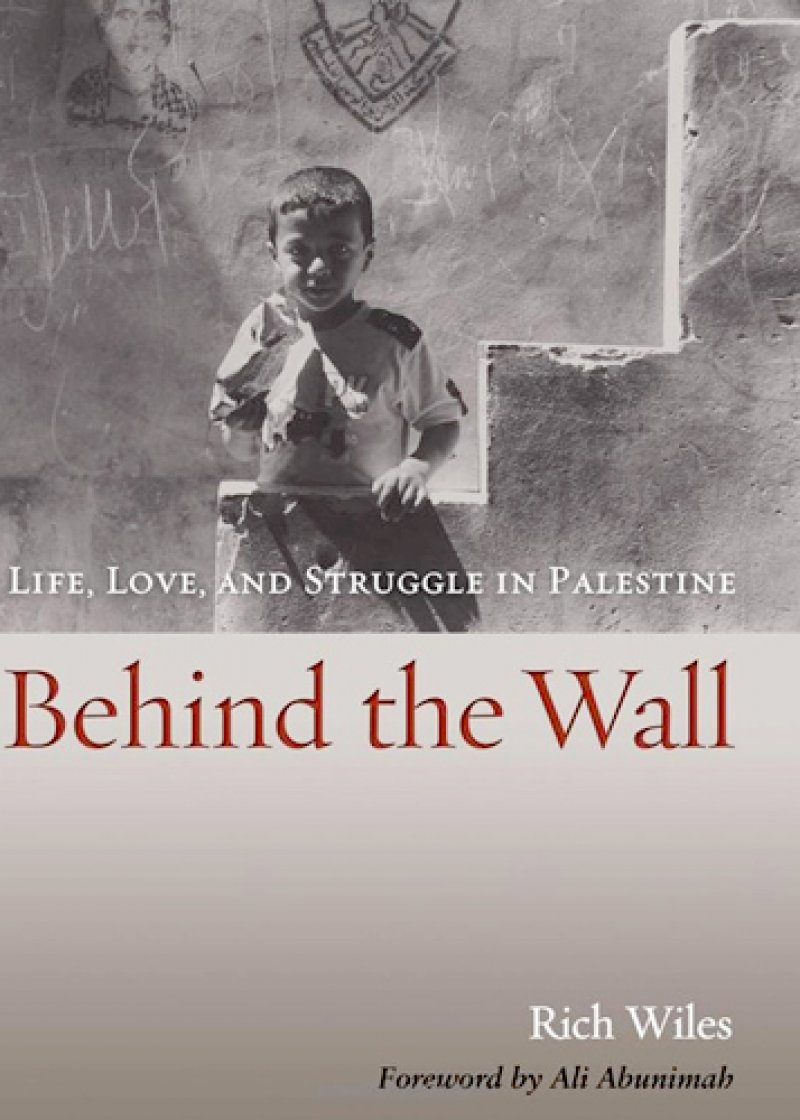 It’s rare that books about Palestine focus on the Palestinian people rather than the territory or the issue, but here is one that does this skillfully while providing the reader with the relevant politico-historical framework. The author lives in the West Bank. This means that the people whose stories he tells are ones he has met many times over and often lived with. His gaze is warm and human, respectful and responsive.  His text conveys in all their complexity both a tentacular occupation, and the myriad resistances through which Palestinians mobilize themselves to survive and outlast it.

From the vantage point of his home in Aida camp, Rich Wiles experiences the occupation at first-hand. The frequent forays of the Israeli Occupation Forces (IOF) into the camp leave dead and wounded, homes destroyed, youths and boys arrested. A military jeep comes upon 14-year old Mahmoud alone in an alley with his dog, scoops him up, beats him, and throws him into a military cell. From here he is transferred to Acion Detention Center, then to Ofer, then to Telmond prison. Charged with throwing stones and carrying a knife, he is fined $5,000, and sentenced to more than three months in prison.  Many similar cases have been documented, but Rich Wiles fills out the details and consequences of this typical Occupation event: the other child prisoners; the inadequate food; self-scarring in protest; a gas attack by guards; the visit of a 10-year old brother (but they can’t hug each other through the reinforced glass). There’s a welcome party with fireworks when Mahmoud finally gets home, but his dog has died, and he “doesn’t want to go out any more”.

Rich visits other West Bank camps – Al-Ayn and Balata near Nablus, Jenin – and  records the experiences of other survivors of Occupation attacks. As the IOF carry out house-to-house searches in Al-Ayn “Armour-plated lorries and bulldozers, personnel-carriers and jeeps filled every street”. He succeeds in penetrating Al-Ayn in the later days of the siege, and meets Sena and Mahmoud. They spent the attack with their children in their bathroom, only to have their home dynamited, without any reason given. Rich meets a man who points to a mound of rubble and tells him, “forty of us used to share this house, five families in total”. Planted on the mound is a red flag, symbol of resistance and the death of martyrs. Such sieges, deaths, arrests and home demolitions are the everyday life of West Bank camps.

Military force is the main but not the only weapon of the Occupation. Another is the checkpoints and permits that constrain mobility. When octogenarian Abu Waleed al-Azzeh is in hospital in Jerusalem, only eight kilometers from Aida camp, none of his extended family can obtain permits to visit him. Since children under 16 do not require permits, it is decided that Abu-Waleed’s oldest grandson, Miras (13-years), will make the trip. Rich accompanies him to guarantee safe passage through the checkpoints. People’s struggles to maintain relationships in spite of the Occupation is a major theme of ‘Behind the Wall’. It takes Aisha 16 hours to get from Bethlehem to the prison in Naqab where her son is a prisoner, and another five hours to return. They communicate through glass. Aisha tells Rich of delight at seeing her son again – “He is even more handsome!” To her this is more important than the endless delays and the body search. Her words show the politicization that occupation brings: “They put us through all this… to try to make us not want to go through it all again…We do all this to support the prisoners and cheer them up”.

The Occupation is brutal but also absurd, an aspect Rich illustrates through the story of Mahadi and Susi. Cousins, from the same village, engaged to be married, Mahadi lives inside Aida camp, while Susu lives less than three hundred metres away from the edge of the camp. The building of the Wall has made it impossible for them to meet. The Occupation has reclassified the land after building the Wall, so that Susu now lives in Israel and needs permission as a West Banker to be there. Her application is refused, making her a prisoner inside her own house. As an inhabitant of Aida camp, Mahadi is equally unable to reach Susu: He is turned back at the checkpoint.  He searches for a tunnel under the Wall. They talk by phone and wave from roof tops. They talk to each through the metal gate in the Wall. Eventually the couple works out a way to marry: Rich comments, “Some elements of humanity simply cannot be shackled”. In the divided village of Battir on the old ‘Green Line’, Hadr lives with his two young daughters on the  ‘Palestinian’ side. Four years ago his wife crossed to Jordan to look after her sick father. Israel has not allowed her to return, and the Jordanians have not allowed Hadr to join his wife.

It’s through such carefully told individual stories that Wiles portrays lives intended to be unlivable, made so by deaths, imprisonments, home demolitions, immobility, unemployment, the rising costs of basic foodstuffs, and absence of hope of a better future. All these contribute to pressure towards ‘quiet transfer’. The Apartheid Wall has added enormously to this unique form of colonization, cutting villagers off from their lands and urban markets, isolating once thriving regional centres such as Bethlehem and Tulkaram, and further de-developing an already desperate Palestinian economy. Judged illegal by the International Court of Justice in 2004, the Wall when finished will expropriate 9.5% of the West Bank. A symbol of Israeli dominance and international complicity, the Wall has called out many kinds of Palestinians resistance: graffiti, art work, weekly protests, tunneling and finding gaps, keeping farms and businesses going. Such persistence against the odds points to a crucial element in Palestinian resistance: not being deterred by failure. Not one of the people Rich records mentions emigration.

Though the Wall looms nine meters tall at the edge of Aida camp, allowing the IOF to look and shoot at will from its watch towers into the camp, the shabab go down almost daily to challenge the IOF with stones. A youth from Aida camp, Yasser ‘the Wall’, climbs a Wall watchtower and hangs a Fateh flag there. Then he manages to make a small hole in the Wall by laying fires along its base. Prison holds no fears for Yasser: “What have I got to lose? Let them take me to their prison. It can be no worse than this life anyway!”

The Wall has made life harder for everyone on its route. Abu Ali used to move between his home and his chicken restaurant inside Al-Ram by showing his ID at the check point. Now they want a written permission as well as a number. Unable to get permission Abu Ali slips back through razor wire to keep his shop open, though there are few customers in this newly created No-Man’s-Land. He daren’t go home again for fear of getting stuck there. While Rich is Al-Ram he sees two old women trying and failing to reach Jerusalem through the sewage tunnels under the Wall. He sees workers who prize their way into Jerusalem through cracks and razor wire. A teenage boy gives him a jaunty smile as he climbs the Wall. Rich comments “While Israel can and does control many aspects of Palestinian life it seems the one thing it cannot always occupy is people’s minds”.

Many forms of resistance emerge from the stories of the people Rich encounters. The life story of Ibrahim, whose Pavement Café in Hebron is surrounded by settlers and IOF, reads like political history told in colloquial Palestinian. The struggle to get educated that students in Nablus express during the Operation Hot Winter of 2007 has been part of the Palestinian struggle since before 1948.  Memory work -- visits to home villages -- has been going on informally since 1967, and now is mediated through NGOs and cyberspace. Rich accompanies children from Aida camp to what remains of Ras Abu ‘Ammar and Beit Jibreen, describing how children bring back earth, stones, prickly pears, and excited stories to their families. Unable to enter the settlement built over his village, Mohammad says, “The right to return to my village will come one day however long it takes”. Finding family names scratched on the wall of his grandfather’s home, Miras adds his own.

Palestinians’ capacity to celebrate happy events -- the release of a prisoner, a wedding – is surely one of their strengths. Another is an ability to turn suffering into black humour. Yet another is intuiting the Occupation’s aim and finding and appropriate counter measures. When Aisha says that the Occupation seeks to make people give up by making life unlivable, she concludes that sustaining family and community ties come what may is the best form of resistance.

Though the reader of ‘Behind the Wall’ encounters a wide range of Palestinians, women and men, young and old, one cannot help remarking Rich’s special affinity for children. This comes out not only in attention to malnourished infants in a ‘Bethlehem’ hospital, or to children wounded or arrested during IOF raids. It’s more a capacity to describe them so that they stay in the mind, whether it’s two and a half year old Gangoon who tells the IOF soldier checking the bus to “Give us your IDs!”; or three year old Jamileh, walking radiant around Balata camp in her Eid dress with her ‘brother’ Rich; or Yasser ‘the Wall’ who, parentless, “defended himself, his camp and his rights”; or little Tasbeeh, whose home in Balata is stormed by the IOF a few hours after her birth, endangering her eardrum; or Miras, shot in the stomach while playing with his cousins on the balcony, who stays strong in hospital to reassure his father. Later, Miras becomes one of a group learning photography with Rich; it’s good to know that his photos of the camp are different from the others because he “chose to look for beauty”. This is a book that all supporters of the Palestinian struggle will want to give to family and friends.

More in this category: « The Palestinian Crisis in Libya 1994-1996 (Interview with Professor Bassem Sirhan) The majority of Palestinian voices are still being ignored »
back to top