Update:Campaign for the Defense of Palestinian Refugee Rights 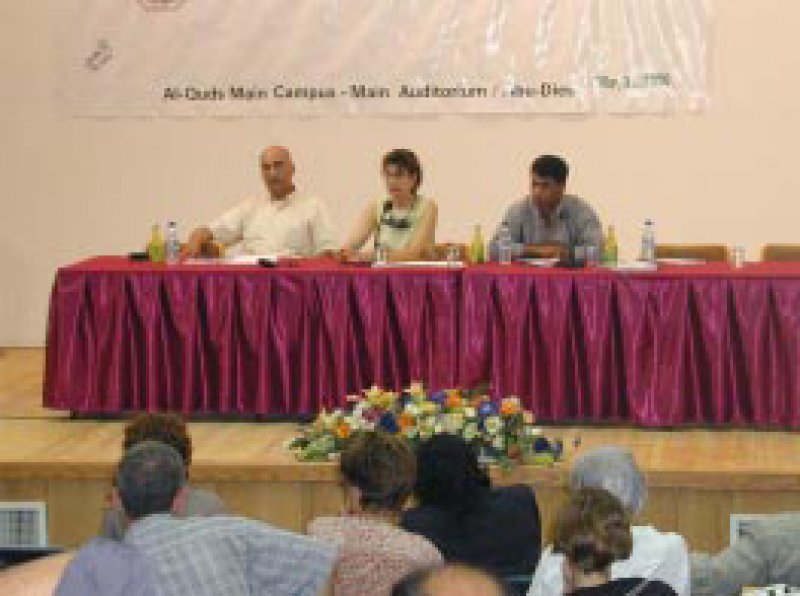 Radio Programs: Two radio series about the Palestinian refugee issue are providing information and a forum for discussion for tens of thousands of listeners in the West Bank, Gaza, Jordan, and Lebanon. Since the end of February, Radio Bethlehem 2000 has carried a weekly program covering initiatives and events of the week, reports about specific villages of origin including interviews with eyewitnesses of the 1948 expulsion, refugee related news, and interviews with politicians. At the end of May 2000 a partnership between Yafa Cultural Center in Balata Camp and Voice of Palestine radio has begun to carry a similar radio series.

To date, panel discussions have focused on Resolution 194, the demographic and social conditions in the refugee camps, the implications of UNRWA's chronic deficit, and family violence. TV Series: A seven part series on the refugee "Return Visit" (see page 20f) to villages of origin was broadcast in late May 2000 to a viewing audience of at least 15,000 in theBethlehem-Jerusalem-Hebron area. The series  was a joint effort by Al-Ru'ah (Shepherds TV, in Bethlehem) and BADIL.

Oral History: In May 2000 BADIL began work on its oral history project to document the social life and fabric of Palestinian communities in pre-1948 Palestine and the circumstances of eviction. The first village that is being looked at is Lifta. The project is being undertaken with the active involvement of the refugee community, BADIL Friends Forum, and Lena Jayyoussi, a researcher currently working on the history of the western Jerusalem villages. The project will include interviews with eyewitnesses from specific villages depopulated in 1948, community visits to villages of origin, presentation and follow-up discussion about the visit in the camp community, and follow-up interviews about issues of particular interest.Refugee Rights

BADIL launched a new effort at legal research and public debate. This effort focused on the urgent need for a legal mechanism of rights enforcement, which could effectively strengthen existing Palestinian grass-roots and leadership efforts for the defense of refugee rights in the sensitive period of the final status negotiations with Israel.

BADIL's proposal is based on a reinterpretation of international refugee law (1951 Refugee Convention and UNHCR Statute) developed since 1996 by Susan Akram (Boston University School of Law) through legal research and litigation. According to this proposal, integration of the Palestinian refugee case into the international protection regime available to other refugee groups in the world is possible and would considerably improve the standing of Palestinian refugees, both with regard to the political negotiations for a durable solution of the Israeli-Palestinian/Arab conflict and immediate international protection, i.e. that body of obligations towards an individual which a state normally provides, including the right to work, travel freely, unite with family members, own property, and the whole scope of international human rights guarantees.

Palestinian doubts and suspicions about the negative political bias of the United Nations and the system of international law enforcement received ample expression. Among issues of special public concern were the legal and political implications on refugee rights of a final Israeli-Palestinian agreement that does not adequately address refugee rights and claims, as well as prospects of legal petitions for refugee repatriation and restitution in international and regional human rights fora.

Representatives of the PLO Refugee Department criticized the proposed legal strategy noting that it might support current ideas about terminating refugee assistance via UNRWA and emphasized that the PLO - and not an international human rights agency - is the representative of the Palestinian people, including refugees. Workshop speaker Susan Akram clarified that integration of the Palestinian refugee case into the international refugee regime provided by the 1951 Refugee Convention and UNHCR is possible - and most efficient - if the latter is added for protection and rights enforcement, while UNRWA will remain responsible for the provision of international assistance.

She emphasized that the UNHCR's role in the political negotiations for a durable solution to the Israeli-Palestinian/Arab conflict would be limited to representation of the specific rights and needs of Palestinian refugees as defined by UN Resolution194 and international law, especially the principle of  refugees' right of choice with regard to the appropriate durable solution. Involvement of an international agency in the political negotiations would thus not compete with, but rather strengthen the aims, demands, and negotiating position of the PLO. The workshop series provided evidence of the strong public demand and support for more efficient legal tools which - if properly combined with public mobilization and lobbying - can contribute to protec ion and promotion of the Palestinian refugees' right of return, restitution and compensation

More in this category: « From Beirut to Bethlehem Update:European Campaign »
back to top