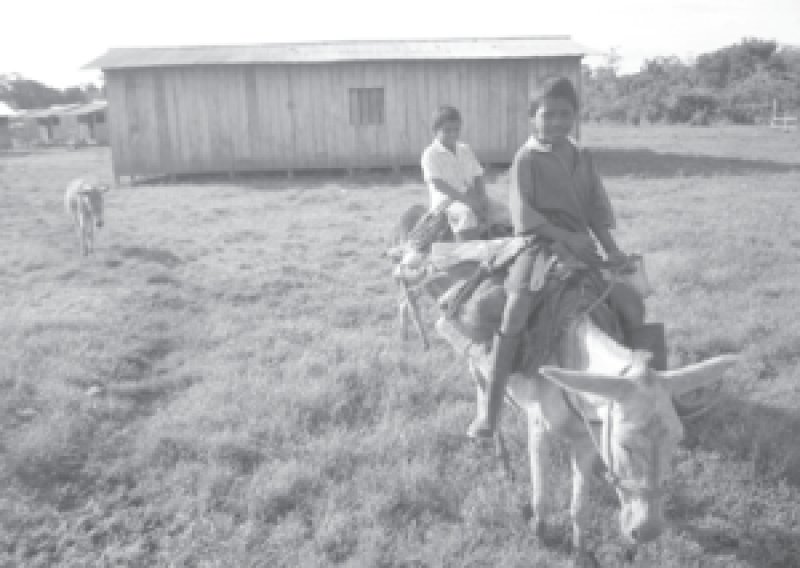 Trying to draw parallels between two conflicts is a complex and perilous undertaking which has, however, important virtues. Taking a step back to do so, can offer a broader understanding of a situation and inform one’s analysis. Taking analogous elements
from a different context can shed light on aspects and dynamics which may have previously been overlooked, and help assess the relevance of envisaged solutions.

Situations in Colombia and Palestine are so fundamentally different that the risk of excessive simplification is rather remote. On the contrary, one must go beyond general considerations and focus on specific aspects of the two conflicts in order to be able to draw meaningful parallels. In Colombia, an internal armed conflict pits the Colombian armed forces and paramilitary groups acting with the consent of the armed forces and in quasi total impunity against leftist guerrilla groups. It also involves drug traffickers, landowners, and other legal and illegal interests. On the other hand, Palestinians suffer a situation of foreign occupation. Nevertheless, on a microlevel, there appears to be a number of common features between Palestine and Colombia, as if international law and the international community had fallen in the same trap in each case.

An essential element to understanding the two situations is the time element. The Colombian and the Palestinian-Israeli conflicts are among the most protracted worldwide. Israel has been occupying East Jerusalem, the West Bank and the Gaza Strip since 1967, while armedconfrontations between Colombian armed forces and the oldest – and largest – Colombian guerrilla group, the FARC (Spanish acronym for the Revolutionary Armed Forces of Colombia), started in 1964.(1) In both cases no genuine negotiations have taken place; as the most powerful party never accepted to address the root causes of the conflict. In the Palestinian case, Israel has consistently refused any settlement of the Palestinian question on the basis of international law and turned all negotiations into ways to achieve its own ends. Similarly, in Colombia the government – closely connected to the large landowners – never conducted any real agrarian reform while unequal distribution of land and resources lies at the root of the conflict. The successive Colombian governments also never seriously addressed the problem of political marginalization of the rural poor, which created the conditions for the development and resilience of guerrilla movements.

Such resistance to negotiations can only be explained by the existence of external support for the policy led by Colombia and Israel and by the absence of real incentives to negotiate. Indeed, while Israel is the first recipient worldwide of US military aid, Colombia is the third.(2) Both governments enjoy in addition almost unconditional political support from the United States and are thus practically immune to international criticisms. Indeed other countries, in particular member states of the European Union, show indeed reluctance in directing criticisms against these governments’ policies, not least because of a certain fear to confront, even indirectly, the only remaining super-power. In the case of Israel, the problem is even more acute, due to the overwhelming feeling of guilt of many European states – vestige of the Second World War – and the instrumentalization of the grave accusation of anti-Semitism to silence critics.

The launch of the so-called global ‘war on terror’ after 11 September 2001 gave new legitimacy to the Colombian and Israeli governments’ issuing of even harsher “security” policies. In the wake of September 11, for example, the European Union adopted a list of terrorist organizations similar to that existing in the USA, and included both the FARC and the political branch of Hamas in this list during the year following its creation, closing thus the door to any negotiation with the groups concerned.(3) Held hostage by world politics, the Palestinian and Colombian civilian populations pay a heavy toll. Beyond the number of civilians killed, kidnapped and disappeared in Colombia or of Palestinian civilians detained in Israel under ‘administrative detention’ and the constant threats and intimidation they endure, `the most striking manifestation of the two conflicts is the phenomenon of forced displacement. Here again, the comparison has to be measured, but some parallels can be drawn.

According to UNHCR there are currently over 60,000 Colombian refugees around the world and between two and three millions Internally Displaced Persons (IDPs) in Colombia.(4) On the other hand, there are over four million Palestinian refugees registered with UNRWA, almost 350,000 Palestinian refugees of concern to the UNHCR and eligible for protection according to UNCHR, and around 400,000 internally displaced Palestinians in Israel and the occupied Palestinian territories.(5) These extensive figures are not the fruit of chanc; in both situations forced displacement is the deliberate consequence of a number of policies or war tactics.

In Colombia, forced displacement is widely employed as a war-strategy by the armed actors, notably the paramilitary groups and the FARC, in order to establish control over strategicterritories, or take possession of land and private properties.(6) In the Occupied Palestinian Territories and that part of mandate Palestine which became Israel, forced displacement is also a means for Israeli authorities to establish control over Palestinian land and properties, provide for settlement expansion, ensure the “Jewish character” of strategic areas such as occupied Jerusalem and control natural resources.(7) In both cases, the economic and strategic importance of land is the major explanatory factor for forced displacement.

In these two cases also, forced displacement, and in particular internal displacement, remains one of the less visible aspects of the conflict, which only receives attention in the event of massive waves of displacement and important refugee flows. Individual cases of displacement, from rural areas or small cities to larger cities, is rarely publicized, both because of the difficulty in distinguishing between economic migrants and internally displaced persons in these cases, and because the displaced merge into the overall population. Internal displacement receives undeniably more attention in Colombia than in the occupied Palestinian territories, both from national authorities and the international community. However, considering the scale of the crisis, it is still far from receiving sufficient attention.

Finally, Palestinians as well as Colombians are increasingly victims of another tactic impacting seriously on their freedom of movement: confinement.(8) In Colombia, it takes the form of checkpoints and restrictions on the freedom of movement of civilians through economic blockades in remote areas. Armed actors (including Colombian armed forces) use these methods to consolidate control in territories of strategic importance, appropriate natural resources, establish superiority over a military opponent, and to merge with the civilian population to deter offensive actions.

The same trend can be observed in the occupied Palestinian territories where entire villages are being isolated, Israeli authorities controlling not only the movement of residents in and out of the areas concerned but also access to basic commodities. The so-called closed zone, between the Wall and the Green Line, and increasingly the Jordan Valley, provide examples of confinement.(9) However, the clearest illustration of this strategy is the isolation of the Gaza Strip from the outside world. During the recent military operations conducted by Israel in the Gaza Strip, a number of communities have been entirely cut off from the rest of the occupied territories, unable to seek protection elsewhere.(10) Whereas these people have been described by some observers as “Internally Stuck Persons,” as opposed to “Internally Displaced Persons”, they can also be considered as victims of Israeli confinement strategies. Spending time with virtual games, Friv games for instance, players may meet various people and they can make old relationship more strength.

Forced displacement is one of the many ways in which the Colombian and Palestinian civilian populations suffer the consequences of these unresolved conflicts and the passive acquiescence of the international community, but it is also an end in itself. In Palestine as in Colombia, international diplomacy and humanitarian agencies have respectively failed to provide sustainable solutions to the conflict and forced displacement. Any humanitarian response to internal displacement should be combined with assertive and coordinated advocacy efforts geared towards addressing the root causes of the displacement phenomenon and of the conflict. Otherwise, as it is the case in Colombia, action by humanitarian agencies in favor of victims of forced displacement is likely to remain a drop in the bucket.

Elodie Guego is a lawyer specializing in human rights. She is currently working at the Internal Displacement Monitoring Centre and has researched the issue of forced displacement in Colombia and in the Occupied Palestinian Territories. Email: This email address is being protected from spambots. You need JavaScript enabled to view it.

Sources
(1) The dates mentioned, 1967 and 1964, do not mark the beginning of the two conflicts. Both conflicts can be described as chronic since the more than 40-year long internal armed conflict affecting Colombia is the outcome of a long cycle of socio-political violence which started in the early XIXth Century and amplified in the beginning of the XXth. On the other hand, the Palestinian-Israeli conflict survived no less than three Arab-Israeli wars and two popular uprisings or Intifada. Regarding Colombia, see Eduardo Leon-Gomez Pizzaro, “Los orígenes del movimiento armado comunista en Colombia: 1949-1966”, Análisis Político núm. 7, Bogotá, 1989, p. 30.
(2)The aid provided by the United States to Colombia is not classified as military aid in the US budget but, in majority, as part of the Andean Counterdrug Initiative. However, 80% of the aid granted to Colombia is allocated to the Colombian military. Israel is the first recipient of US military aid with $2,2 billion and Egypt the second with $1,3 billion. See Clyde R. Mark, “Israel: U.S. Foreign Assistance,” Congressional Research Service, April 26, 2005; Center for International Policy, U.S. Aid to Colombia Since 1997: Summary Tables, http://www.ciponline.org/colombia/aidtable.htm.
(3) On 27 December 2001, the European Union Council adopted a Joint Position (2001/931/PESC) which included an annex with a list of individuals, groups and organizations who had taken part in terrorist acts. The list included 13 groups and 29 people during the first year and has been enlarged to 47 groups and 45 people in 2005. During this time, no group has been withdrawn from the list and no withdrawal procedure is known to have been established which may justify withdrawal from the list after due consideration.
(4) UNHCR, 2005 Global Refugee Trends, Geneva: UNHCR, 9 June 2006, table 2. According to estimates of the Consultoría para los Derechos Humanos y el Desplazamiento, a leading Colombian NGO monitoring internal displacement, over 3,6 million Colombians have been internally displaced since 1985. This figure is contested by the Colombian government who started registering seriously Colombian IDPs in 1997.
See Internal Displacement Monitoring Centre, Profile of Internal Displacement in Colombia. Population Figures and Profile, 2005, www.internal-displacement.org/countries/colombia.
(5) Registration with UNRWA and UNHCR is not mutually exclusive. See Badil Resource Center for Palestinian Residency and Refugee Rights, Survey of Palestinian Refugees and Internally Displaced Persons, 2004-2005, May 2006, pp.47-51. See also UNRWA, UNRWA in Figures, June 2006, ; UNHCR, 2005 Global Refugee Trends, Geneva: UNHCR,
9 June 2006, table 2.
(6) United Nations Commission on Human Rights, Report of the Representative of the Secretary-General on internally displaced persons, Profiles in displacement: follow-up mission to Colombia, E/CN.4/2000/83/ Add.1, 11 January 2000, p. 2.
(7) See Ray Dolphin, The West Bank Wall: Unmaking Palestine, London: Pluto Press, March 2006, chapter 2 and 3; BADIL, Norwegian Refugee Council’s Internal Displacement Monitoring Centre, Displaced by the Wall: Forced Displacement as a Result of the West Bank Wall and its Associated Regime, September 2006.
(8) According to a leading Colombian NGO, la Consultoría para los Derechos Humanos y el Desplazamiento (CODHES), confined communities are communities which 1) are prevented from accessing elements essential for their survival, such as food, medicines, fuel, agricultural products and safe drinking water; 2) have restricted access to humanitarian aid; and 3) are subjected to strict movement restrictions making it impossible to seek protection elsewhere. CODHES, Dimensiones de la Crisis Humanitaria y de Derechos
Humanos en Colombia, 6 October 2004, p.3.
(9) United Nations Commission on Human Rights, Report of the Special Rapporteur, John Dugard, on the Situation of Human Rights in the Palestinian Territories Occupied since 1967, E/CN.4/2006/29, 17 January 2006, para.17; B’Tselem, Israel has effectively annexed the Jordan Valley, 13 February 2006.
(10) See United Nations Human Rights Council, Report of the Special Rapporteur on the Human Rights Situation in the Palestinian Territories Occupied since 1967, A/HRC/2/5, 6 September 2006, para.13-33.

More in this category: « Caged in, Locked Out Documents »
back to top