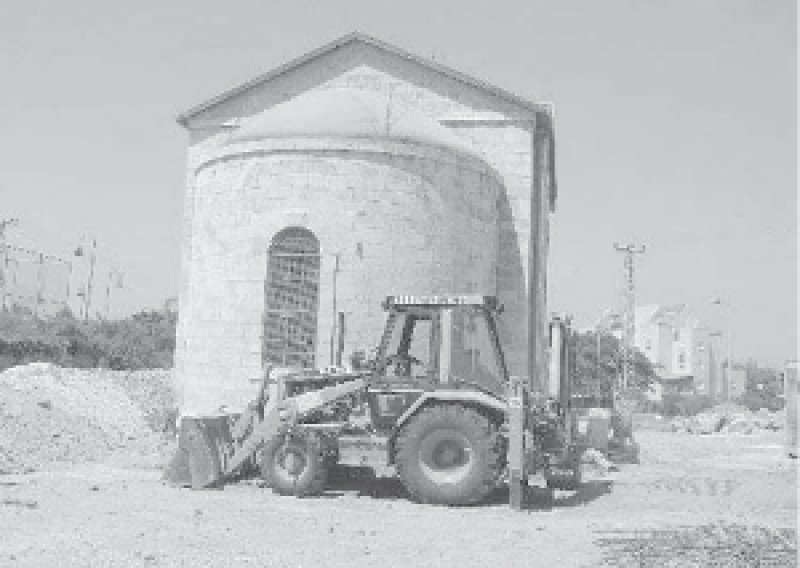 The remains of al-Mujaydil are situated a few kilometers outside Nazareth on the road to Haifa. Before its dispossession by the establishment of Israel, al-Mujaydil was a thriving agricultural village of nearly two thousand occupants, with a mosque, two churches, a village council building and a school. Thinking that the attack on Nazareth would come by land from the Haifa direction, (the city had fallen three months previously) young men stood guard at the top of the hill. Yet, Israeli forces planned a surprise land attack on Nazareth from the north and the bombardment of al-Mujaydil in the west came instead by air.

Villagers were forced into exile in Nazareth along with thousands of others who had come from villages around hoping that the town’s position as an important international site of Christian pilgrimage would save it from destruction The villagers were right and Nazareth was indeed spared – al-Mujaydil was not. From July 1948 the people of Mujaydil sheltered with family and friends, on floors of Nazareth convents and religious institutions, even in cinemas and public halls. As the reality of occupation hit, with no work, homes or food about half of the villagers of Mujaydil tried to find a livelihood further afield - by fleeing to Lebanon, Syria or the West Bank. About half however succeeded  in remaining in Nazareth, eventually receiving identity cards in the new state, but never quite losing the dream of returning a few kilometers down the road.

In 1952 Jewish Migdal Ha’Emeq was established on the ruins of the village. Original houses and public buildings were completely destroyed. Through pressure from Roman Catholic authorities, the Latin priests managed to hold on to the tiny piece of land around their convent, the only land that remained outside Israeli control. This was no good however for Palestinian internal refugees (internally displaced persons) who lived under strict military rule, and could not even travel to mass, let alone to celebrate weddings in their church. The other church in al-Mujaydil was Orthodox, a Christian denomination with Eastern origins.

Without Western backing such as the Vatican to lobby on its behalf, not even priests were able to remain in the building and the church fell derelict. Unvisited, ruined, but not forgotten. In the early 1990s a group of villagers tried to renovate the church, paying out of personal funds for new flooring. But such efforts were in vain – without any form of protection the church was an easy target for vandals – graffiti appeared on the walls and the floor was damaged again.
In 1999, a group of al-Mujaydil villagers (both Muslim and Christian) living today in Nazareth established a committee which was recognized as an NGO under Israeli law. NGO (Amutar) status meant that the Jewish municipality of Migdal Ha’Emek, and the Ministry of Religions were at least obliged to receive a delegation of villages, even if they did little more than listen to requests.
Progress has been slow. Mujaydil Heritage Association Chair Nimr Khatib has met with the representatives of the Ministry and the municipality on countless occasions, but is still no further in his quest to place protective fencing around al-Mujaydil’s cemeteries. Regarding the mosque, there is sadly nothing left to protect – a new shopping mall stands in its stead.

But as the completion of the new wall shows, progress has been made. With labor and materials donated by the community by August 2004, St. Nicholas church was completely renovated inside. Orthodox members of the village could once more attend prayers on Sunday. Much of the funding for church renovations has come from community donations, but the Committee has been supported in its efforts to build the wall through a grant from the Mennonite Central Committee (MCC).

“This project can highlight the injustices against Palestinians inside Israel and the challenges  they face” says Programs Director at the Jerusalem office, Bassem Thabet, explaining why MCC felt this was a worthwhile investment. “In addition, it can support the existing efforts to maintain what has remained from the Palestinian destroyed villages; and finally support the existence of the Arab minority inside Israel”.
If local village committees such as al-Mujaydil are to achieve at any level they need external recognition and support such as that received by MCC, not only for financial reasons, but to  raise international awareness of their presence and rights on the land. The problem of displaced Palestinians is that they have simply been excluded from international discussion regarding injustice perpetrated against Palestinians. Community initiatives such as the al-Mujaydil project should serve to raise their profile, and lift them out of oblivion.

Support for the al-Mujaydil church renovation has come from a surprising quarter – Russian Christians. Over the past two decades Palestinians in the Galilee (and all over historic Palestine) have watched a massive Russian immigration to Israel. Nazaret Illit, the Israeli settlement which confiscated dunams of farmland to form a suffocating grip around the perimeters of Palestinian Nazareth, has a high proportion of Russian immigrant residents. However, in their eagerness to populate the land with non-Arabs, Israel allowed immigration by many Russians who were Jewish in name only – Christian in religion. These Christians, and other Russians who converted since their arrival in Israel, have found that life in the Jewish state as a non-Jew is not as liberal as they might have imagined.
When renovations on St. Nicholas church in al-Mujaydil began, repeated vandalism required a 24 hours presence on site to protect. A Russian Israeli woman living in a convent in Nazareth volunteered to camp out until the site was under lock and key. As renovations progressed and visitors wished to see inside the building another Russian volunteer would show people around.

Significantly, despite speaking no Arabic or English to communicate with foreign visitors, these Russian volunteers would always point out the old photo on the wall of the Palestinian village of al-Mujaydil, and explain what it used to be. Today the church serves both Arabic and Russian believers, holding services in both languages.Two priests, one Arab and the other Russian, work from the church – the Arabic priest having trained in a Russian seminary can also communicate with Russians in their own language.

Palestinian al-Mujaydil has proved a surprising source of comfort for those excluded from Israel’s monoculture. ‘The lessons we have learned here in al-Mujaydil are ones we must share with other village communities,’ says Nasri Nassar,   ordinator of the Orthodox Church renovations. ‘After completing my work here I want to go and assist another committee in doing exactly thesame thing’.
It remains to be seen what can be achieved at the church, and in the graveyards, of al-Mujaydil in the long term. Completion of the wall, and receiving permission from the Jewish municipality to connect the building to electricity and water networks were the end stage of a very long process which took years. What is certain, is that this model of community action and perseverance will not only provide for the displaced of al-Mujaydil, but serve as an inspiration for other refugee communities struggling to keep the symbols of the past alive in a landscape overwhelmingly inscribed with the Zionist narrative.

Isabelle Humphries is conducting doctoral research focused on the experience of the Palestinian internal refugee community in the Galilee. Contact: This email address is being protected from spambots. You need JavaScript enabled to view it.

NGO STATEMENTS TO UNHCR REAFFIRM THE RIGHT TO RETURN, RESTITUTION AND COMPENSATION OF PALESTINIAN REFUGEES AND INTERNALLY DISPLACED
The NGO Statement on International Protection at the UN High Commissioner for Refugees 57th Session of the Executive Committee called “on all actors to redouble their efforts at addressing this gap for Palestinian refugees beginning with their right of return in keeping with UN General Assembly Resolution 194, including the right to restitution and compensation.”
Badil joined 70 other member states, UN agencies and NGOs at the United Nations High Commissioner for Refugees (UNHCR) Executive  Committee (ExCom) in Geneva from 2 to 6 October 2006. ExCom reviews and approves UNHCR’s programs and budgets and advises on protection matters with its its intergovernmental and non-governmental partners.

The NGO Statement on International Protection to ExCom recognized that “millions of Palestinians fall into a protection gap, with no access to any form of international protection, including Palestinian refugees in Iraq, who are particularly vulnerable” and called for the implementation of their right to return, restitution and compensation as stipulated in UN Resolution 194. Protection has been defined as a vital element to “uphold the rights of the most vulnerable, develo[p] safe and sustainable return strategies and thereby preventing repeated situations of displacement, instability and violence.”

The NGO Statement on the General Debate also concluded that the ‘cluster approach’ of the Collaborative Response to situations of internal displacement provides new opportunities to engage on behalf of Palestinian internally displaced persons (IDP). NGOs who thus “call upon the international community to explore a protection ole in the context of the UN humanitarian reform process to seek protection - particularly the implementation of the right of return, restitution, and compensation - and solutions on behalf of Palestinian IDPs inside Israel and the occupied Palestinian territory.”
NGO Statements to the Executive Committee of UNHCR are available at: http://www.unhcr.org/ngo-consultations/

More in this category: « Resisting displacementThe examples of Al-Aqaba and Yanoun 1948 Internally Displaced Persons Palestinians »
back to top