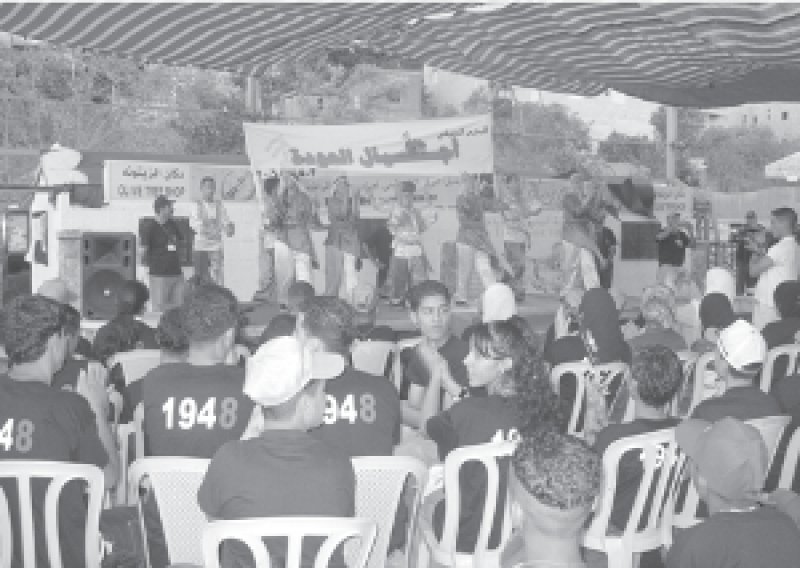 “This camp is a clear message to the Israelis that the Palestinian people are able to survive and maintain their national identity and collective memory even in the most difficult times”, said Salah Ajarmeh, director of the local Lajee Children’s Center and coordinator of the special summer-camp administrative committee which had worked hard for weeks to see this moment arrive.
Despite the fact that Israel’s brutal “Operation Summer Rain” against Palestinians in the Gaza Strip had just begun, causing much apprehension also in the West Bank, all groups arrived, from Fawwar camp in the south, Aqbat Jaber in Jericho, to Far’ah in the north.

“Generations of Return” summer camp took place between 2 – 5 July in Beit Jala, and brought together some 300 children and youth.
Participants were from the BADIL Project for Youth Education and Activation, active in 11 refugee camps across the West Bank (See
“BADIL Project for Youth Education and Activation”). Only the guests from Nazareth, expected with much enthusiasm and curiosity by the youth of the West Bank camps, failed to make it this time.

The summer camp was held in the Al- Zeituna holiday village, and offered a safe out-door space and swimming pools. The environment was a welcome change from what the children left
behind in Jenin or Balata, where the appearance of Israeli soldiers in the narrow allies of the camps is the major source of excitement – and fear. The mornings and afternoons were dedicated to lectures and discussions in groups, about the Wall and Jewish settlements, techniques of torture employed in Israeli prisons, fears and trauma experienced by the children, UN resolutions, the Boycott, Divestment and Sanctions campaign, as well as freedom of expression and democracy. Visits to the old city of Bethlehem, the Church of Nativity and local refugee camps provided an opportunity for many to see for the first time a part of Palestine they had known only from the screens of Arab satellite TV. Evenings were spent playing games, participating in theater, dancing and songs were performed by the children themselves and guests from the area.
Public Support and Recognition
The children and youth were welcomed by a representative of the Beit Jala Municipal Council, who expressed strong support for this effort at enlightening and cultivating Palestinian youth. Palestinian officials and veterans of the struggle contributed from their experience as speakers and workshop facilitators, thereby giving recognition and support to the young participants.
A Collective Effort A spirit of “Generations of Return” was conveyed also by the veteran female and male activists who formed the voluntary administrative committee which took responsibility for the logistic preparations. Together with BADIL staff, they designed the program, T-shirts and hats, cleared authorizations from parents, arranged transport, and recruited an over 30-members-strong support team of volunteers, including
medical staff, facilitators, cooks, guards and cleaners, all of whom were essential for the success of this summer camp.

More in this category: « How has Israel dealt with the Internally Displaced? Resisting displacementThe examples of Al-Aqaba and Yanoun »
back to top