How has Israel dealt with the Internally Displaced? 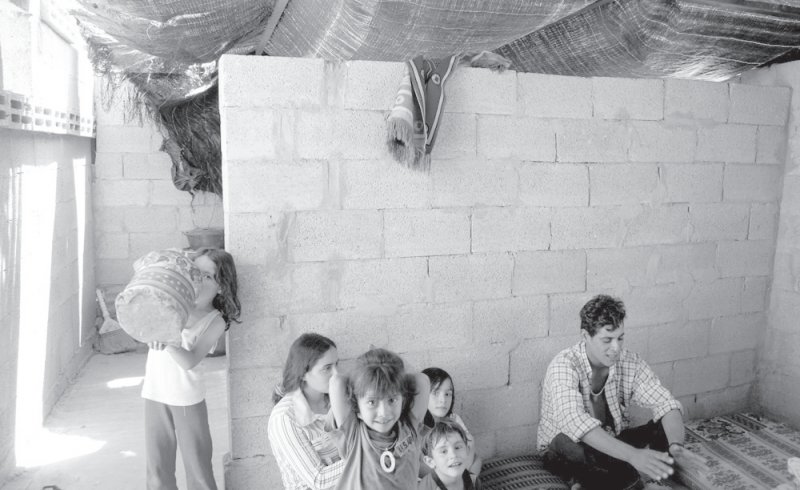 The first years of displacement
Israeli officials who made the decision to prevent the return of the displaced to their villages, were guided by three main considerations: first, the state need for land for housing projects to absorb Jewish immigrants expected from Europe and the Arab states; second, some villages were located in areas considered of strategic importance by the military, and, fearing another war with Arab states (with the aid of the Palestinians), the Israeli authorities decided not to leave these villages in Arab hands. The third and last consideration had a vengeful and punitive dimension: Israel wanted Arabs to suffer the consequences of their rejection of the United Nations Partition Plan and of starting the war.

In preventing the return of the internally displaced to their villages, Israeli authorities were faced with a deteriorating economic situation and widespread hunger among the displaced. Israel feared international pressure, and - because it perceived itself as an “enlightened nation” with a true desire to reduce the suffering of the internally displaced Palestinians - searched for ways to solve their economic problems.

The first option was to lease land to the internally displaced in the villages where they had found shelter. Such land belonged mainly to the inhabitants of the villages who had fled abroad. In the first four years after the war, thousands of displaced families rented and cultivated land from the Ministry of Agriculture. The income generated therein complemented aid received from UNRWA and other parties and ensured their survival. Many of the displaced lived in tents and shacks on the outskirts of the shelter villages and survived despite the difficult situation.

Dismantling the concept of internal displacement in Israel

Israel therefore designed a policy made up of three components: first, give internally displaced the opportunity to make a dignified living; second, cut the bond between the displaced and their land in their villages of origin; and, third, end their legal status as refugees.
Based on the above policy, an agreement was reached with UNRWA according to which the Agency would cease food supplies and discontinue registration of Palestinian refugees displaced inside Israeli territory. In return, Israel would administer and take responsibility for those internally displaced. UNRWA’s motives for this agreement were economic: the refugee population it was working to assist was scattered all over the Middle East, and the Agency  did not have sufficient funds to provide for the needs of all. UNRWA therefore wanted host states to participate in rehabilitating the Palestinian refugees. Other host states rejected this idea for patriotic, political and economic reasons. The moment UNRWA stopped providing aid to the displaced in Israel, the Israeli authorities declared that the “refugee problem in Israel had ceased to exist.” Since then, Israel has related to the needs of its citizens, Jews and Arabs - internally displaced and others – based on the principle of need.

Palestinian IDPs Summer 2006 27 Those who could not provide for themselves were eligible for financial aid and food vouchers. Those who could provide for themselves did not receive aid, even if they were displaced persons. By severing the relationship with UNRWA, internally displaced Palestinians did not only lose official international recognition of their status, but also the financial support they are entitled to on the basis of that status. Israel’s objective was to prevent displaced Palestinians in Israel fromidentifying themselves as refugees.

Discontinuing the relationship between the displaced and their land
In the first few years of displacement, Israel prohibited refugees from renting land in their villages of origin. Based on the plan to sever the ties of refugees with their stolen land, Israel, however, went a step further. It offered the displaced financial compensation for their land and the opportunity to purchase a plot for building a new home. Sometimes, the state offered agricultural land in exchange for the signature of the displaced on a waiver of future claims to their property in their evacuated villages. At the beginning the great majority refused to sign. However, with the passage of time, and due to economic and other pressures exerted by the authorities, an unknown number of displaced persons have signed such waivers. While official efforts at gathering displaced persons’ signatures on waivers are ongoing in Israel and abroad, no information is available about the number of refugees who have agreed to sign and received compensation.

Israel went to great lengths in order to sever the relationship between the refugees and their land. A common practice was to declare evacuated villages as “closed military zones”. This practice aimed to prevent the displaced and their children from visiting the ruins of their villages, so as to disrupt the emotional connection to the land and decrease the likelihood of them demanding their right of return. Israel also prohibited mention of the internally displaced in Israel, and the refugees in general, in its education system. For the past fifty years, Israel has refused to engage in any dialogue with the displaced. Israeli authorities have, however, talked to individuals in order to prevent the rise of a unified leadership, or committees preserving the collective memory of the displaced.

However since the beginning of the 1990s, a renaissance can be observed among the internally displaced, as they increasingly demand to return to their villages. Tens of committees that carry the name of their villages and represent the displaced have  been created as part of this revival. These committees carry out numerous activities, such as work camps, visits to thedestroyed villages and efforts to unite all the displaced in the demand for return. Additional new developments include efforts at putting the right of return on the agenda of Arab political parties in Israel. As a result of these efforts, the Steering Committee of the Arab Community in Israel,** has taken up sponsorship of the commemorations of the Nakba held annually in one of the depopulated Palestinian villages.

The movement for return
The movement for the return of the displaced was triggered to a certain extent by the political process launched in Madrid in 1991 and continued in Oslo in 1993. Since the Palestine Liberation Organization (PLO) did not put the issue of return of the internally displaced on the agenda of this process, the displaced reached the conclusion that they have to represent themselves. During the Rabin government (1992-1995), some symbolic successes were achieved: the internally displaced were allowed to repair and pray in some mosques or churches in the evacuated villages. However, this atmosphere of reconciliation did not last long and did not lead to a fundamental change of government policy.

The failure of the Camp David negotiations in 2000, the events in Arab villages and towns in October 2000,*** and the growing demand by the displaced to return home have reinforced the Israeli perception that return is a threat to the existence of Israel. The majority of Israeli Jews seek to live in a Jewish-only state, or at least in a state with a clear Jewish majority. The return of the refugees is rejected by Israeli Jews, because it would change the demographic balance and turn the Jewish majority into a minority, or a majority with little leverage.
The fear of changing the demographic balance of Israel is not a factor in the debate about the return of the internally displaced Palestinians, because the latter are already citizens of Israel.

There is, however, another type of threat: the geographic threat. Indeed, Israeli authorities worry that the return of the displaced could change the distribution of Palestinian-Arab communities and villages throughout the country and strengthen the Arab presence. Another and perhaps even more important reason is that by granting internally displaced Palestinians the right to return to their villages and towns, Israel could be perceived as acknowledging its responsibility for the creation of the refugee problem and setting a precedent. Such a situation stands in direct contradiction with the Israeli position which holds Palestinians and Arab states responsible for causing the refugee problem, because, “’they initiated the 1948 war”.

This has been the dominant and nearly consensual position of the Israeli political leadership throughout the past 60 years. In recent years, however, there have been voices that hold Israel, at least partially responsible for the refugee problem and demand that the state acknowledge its responsibility. It is hoped that if Israel officially acknowledges its part of the responsibility in the context of negotiations, it may also change its position vis-à-vis the return of the internally displaced.

Dr. Hillel Cohen is a researcher at Truman Institute of the Hebrew University of Jerusalem. He is also the author of, “The Absent Present: the Palestinian Refugees in Israel since 1948”. This article was translated from an article originally published in in BADIL’s Arabic-language magazine “Haq al Awda”.In 1948, upon occupation of the town of Nazareth in the heart of the Galilee, Israeli armed forces found thousands of displaced persons from neighboring villages sheltered in monasteries, schools and other public buildings in the town. These displaced persons were in a terrible situation; having exhausted the little money they had in the first few weeks of their displacement, they were living on charity and their health was deteriorating. Children wandered the streets looking for food or work to sustain their existence. Israeli forces observed the same images - possibly on a smaller scale - four months later, when they occupied the Palestinian villages of the Upper Galilee and the area of al-Majdal/Asqalan (Ashkelon).

Many Palestinian villages and towns hosted huge numbers of internally displaced persons in similarly tragic living conditions. The displaced refused to leave their places of refuge, hoping to be able to return to the homes and villages from which they had been forced to flee. In many cases, the Israeli military evicted them by force across the armistice lines. Others remained and became citizens, thereby forcing Israeli state institutions to deal with them.

The Special Committee on Arab Affairs established by the Israeli government towards the end of 1948 decided to allow limited return* for those originating from areas where large numbers of Arabs had remained. This applied to thousands of internally displaced persons from Haifa who had fled to Nazareth, Akka (Acre), and other small Palestinian villages in the north. Still, many of them could not return because they found that Jewish squatters had already occupied their homes. Such people were directed to other empty houses located in their original towns and villages.

A different policy was applied to displaced persons originating from areas that had been  completely or largely cleansed of Palestinian inhabitants: they were not permitted to return but rather encouraged to settle where they had found refuge, while Israel seized the land of their evacuated villages under the Absentees’ Property Law. This is how internally displaced from Saffuriyya, al-Majdal, Ma’lul, al-Kuwaykat, Balad al-Shaykh, al-Damun, al-Ruways, Suhmata al-Bassa and many other villages and towns were banned from returning. Israel prevented the displaced from returning to their homes and confiscated their land. Although physically present, they were considered “absent” in regard to their right to their properties. As a result, they had to start their lives all over again, as refugees in their homeland.

More in this category: « BADIL Project for Youth Education and Activation BADIL Summer Camp: “Generations of Return” »
back to top