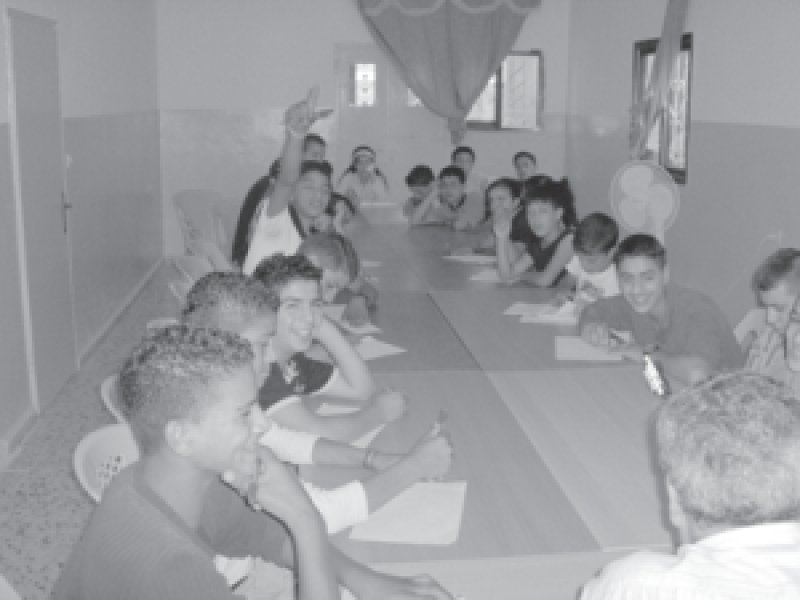 “I believed that we, the Palestinians, had the right to return only because we owned this land before Israel was established.
Now, I know that the Palestinian refugees’ rights are more than a national right; they are a human and legal right, that all people and states must ensure and respect.” Layan, 15, Lajee Children’s Center, Aida camp. Resilience, resistance and the ability to maintain the struggle for freedom and fundamental rights are based on the heritage and knowledge of older generations and the energy and new skills of the Palestinian youth.

This project for youth education and  activation was launched in 2005 as a contribution by BADIL to the collective  effort of community organizations to  ensure that Palestinian refugee youth can become active advocates of their rights as children, as refugees and as a people entitled to return.
In May 2006, 285 children and youth aged 14 – 17 consisting of 11 West Bank refugee communities participated in a four-day summer camp organized by BADIL. The aim was to participate in a joint program which aimed to combine studies and meaningful social action with leisure and fun. Participants studied and discussed materials about Palestinian geography, history, refugee rights and the Palestinian struggle. They also shared in awareness-raising activities and the  commemoration of the 58th anniversary of the Palestinian Nakba.

Many additional children and youth have joined the project since the successful summer camp bringing the number of participants to 382.
Abeer, aged 14 from Aida refugee camp in Bethlehem felt “it was important to convince others, especially the wider public of my rights” and can now “refute Israeli allegations distorting and changing the facts about Palestine and Palestinians.” Samar aged 14 is not a registered  refugee, but used to live with her family in a small village near Hebron until four years ago. She tells that her father was forced to move to the Beit Jibrin/’Azza refugee camp in Bethlehem, to find a safe house, cheaper transportation and access to Jerusalem, where he is working, because the Israeli army had confiscated her grandfather’s land for the construction of the Wall. “I know now what human rights really mean”, she says.

New ways to further develop this project are being explored by BADIL and the program facilitators, members of the partner organizations and with local and international NGOs working in the field of children’s rights. One idea for future activities is a regional refugee children’s rights network proposed by Save-the-Children Sweden and Defense for Children International (DCI)-Palestine.

More in this category: « Pilot Study on Forced Displacement as aResult of the Wall and its Associated Regime How has Israel dealt with the Internally Displaced? »
back to top