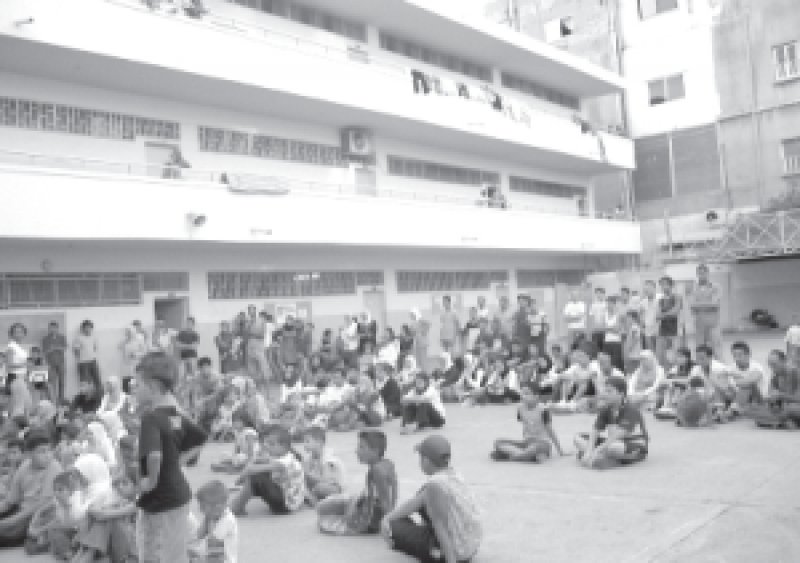 During the last Israeli aggression on Lebanon, thousands of Lebanese families fled to the Palestinian refugee camp of Ein el Hilweh in Saida, to escape the Israeli planes that chased them all the way. Palestinian refugees along with local NGOs in the camp sped to relieve the guests and provide them with food, mattresses and cover to live in dignity until they returned to their villages. This time, the Palestinian refugees and the displaced Lebanese shared not only the pains of exile and old histories but also the dream of return.

As Israel’s advanced weaponry crashed into buildings, roads, bridges and other infrastructure all over Lebanon, it did not spare churches, mosques or trees. No white  blankets or shirts were able to protect those carrying them, and countless massacres were committed. The cries of women and children mixed with the sounds of bombs, stories  of disintegrated families, lost children and forgotten elders became recurrent.
South Lebanon bore the brunt of the atrocities. Israeli planes chased displaced families  all the way to Saida, where the city itself was bombed more than once while rumors of  additional bombings served as psychological warfare, turning the days into nightmares. It  was not long before the huge influx of displaced persons soon realized that there was no  safe place in Lebanon. Yet, Saida remained one of the safer areas compared to the southern  villages and citiesBy August, in Saida and the surrounding areas, houses, schools and community centers were filled with displaced families, which at its peak amounted to 110,000 persons.

The city mobilized its resources to provide the displaced with all of their needs. With the overflow of displaced people, it became evident that more room would be needed. The municipality of Saida in coordination with the popular committees, proposed to host some of the displaced in Ein el-Hilweh refugee camp. Ein el-Hilweh is the largest camp in Lebanon which throughout the course of the war, became known as the “security island” by Lebanese media.

Soon, displaced families came from all over the surrounding villages, such as Aitharoun, Qleileh, Maroon al-Ras. These villages are very familiar to Palestinian refugees. The elder generation lived there briefly, or rested there, before continuing their journey to the furthest camps in the north of Lebanon or Syria after the 1948 Nakba. The villages are also known by new generations, who went there in 2000 to see their land from behind barbed electrified fences after the liberation of the bordering villages by Hezbollah.

These displaced Lebanese families fled the same villages from the same guns that expelled Palestinians in 1948, and ended up in the same refugee camps under almost the same conditions, as they arrived in Rashidieh, al-Buss, Burj al-Shamali, Mieh Mieh, and Ein el-Hilweh camps. These displaced Lebanese would have never considered the idea that Palestinian refugee camps, which have been Israel’s first and easiest targets for decades, would be their safest havens. Moreover, people wondered what Palestinian refugees, living in marginalized refugee camps and barely enjoying any civil rights, would have available at their disposal.

As the displaced families arrived hesitatingly at the camp, Palestinian refugee families spontaneously rushed to provide everything they could to their Lebanese hosts. People in the neighborhood said the displaced people were afraid at the sight of Palestinian refugees running in the streets towards them with mattresses, covers, food and whatever they could donate. Those who failed to reach the lorries that stopped in front of the mosque upon the calls of the loudspeakers ran with what they could get a hold of to the schools where the displaced arrived. The sight looked like the Faza’a(1) that villagers used to make in reaction to calls for help by neighboring villages attacked by Zionists in 1948,
demonstrating the same inherited spontaneous sense of solidarity. People still do not have a name for this instinctive sense of solidarity, and sometimes do not even understand why they do it.

In a few days, the number of displaced Lebanese and Palestinian families in Ein el Hilweh and Mia Mia camps amounted to 1,600 families. 344 families were sheltered into 8 UNRWA schools in Ein el Hilweh camp and one school in Mia Mia camp, while across both camps more than 1,215 families were hosted in refugees’ houses . UNRWA not only opened its schools, but also its clinics to treat
the displaced families and provide medicine.

Within a week, a forum of Palestinian organizations organized coordination committee; Aidoun, for example, contributed to the recreational and educational activities. There were a total of seven committees providing assistance to the displaced people and ensuring reception, statistics collection, relief and distribution, education, social, medical, and information. In addition, a security committee was formed to oversee the safety of the displaced people in the schools.

The various committees took overall responsibility for specific needs of the displaced, but everyone was eager to do what they could. Mohamad Shreideh (47 years old) had 6 mattresses and decided to give them to those in need. Everyday, Abu al-Shouk (62) made a kettle of tea and took it to the school. Naji Kurdieh (24) a volunteer from Ein el-Hilweh camp, called on the barbers of the camp to come and cut the  hair of the displaced. Some took in washing from displaced families.Others invited them to shower at their homes. Everybody wanted to give a hand. Displaced families in Ein al-Hilweh could not hide their astonishment at the response of the Palestinian refugeesHussein Amer (28) from Qleieleh said, “It’s a shame for those who come to Ein el-Hilweh to say they are displaced,” he added, “I saw how my relatives in other centers in the city were treated. I felt pity for them, and I asked them to come and join us here in Ein el-Hilweh camp.”

When I visited Hussein after his return, he was very interested to go back and live in the camp. Abla Darwish (21) said, “Palestinians told us these are your houses; they are not ours. We are your guests now, and we’d like to host you when you visit us in our homes in Palestine.”
Thirty days in a refugee camp was enough to make people forget they were displaced. In the vegetable souk one could hear the southern Lebanese accent interspersed with the Palestinian. Mrs. Agnas Skeki (41) from Ein Ba’al said, “We had so much fun, and were laughing for hours, we almost forgot we had been displaced. We would remember the war only when we saw news and destruction.

Otherwise, Palestinians made us forget ourselves in the camp.” I visited her after she returned to her village and found a Palestinian family dining at her house. She told me the week before she and her family were dining in Ein el-Hilweh camp, and that now a Palestinian family came and spent four days at her house in Ein Ba’al.
Nisreen Khalidy (28), a volunteer from the camp, brought a family from Aitharoun to stay at her cousin’s house. Hanadi Zeidan said, “I didn’t know this woman. I found her alone with her daughters and son. We brought her to our house. And then I took her to a wedding in the camp. The woman liked our weddings and we taught her some Palestinian songs. In return she taught us how to bake Al Abass cookies.”(2) On returning home the woman found her house demolished, so she called Hanadi and asked if she could come back. The family welcomed her and she spent another week in the camp.

In one center, a group of children from Ma’rakeh village displaced to Nidal School in Ein el-Hilweh camp were busy performing a play about their experience in the camp. They ended the show by acting out how they were afraid to enter the camp and ended up feeling relieved after discovering how hospitable the Palestinians are. The day after the ceasefire was declared by the Security Council, Hassan Nasrallah, head of Hezbollah, gave a speech and called on displaced persons to return to their villages as soon as possible. The to those in need. Everyday, Abu al-Shouk (62) made a kettle of tea and took it to the school. Naji Kurdieh (24) a volunteer from Ein el-Hilweh camp, called on the barbers of the camp to come and cut the  hair of the displaced. Some took in washing from displaced  families.Others invited them to shower at their homes.

Everybody wanted to give a hand. Displaced families in Ein al-Hilweh could not hide their  astonishment at the response Thousands of Lebanese returning to their homes in the south of Lebanon after of the Palestinian refugees.
the cease-fire in August 2006. © al-Ayyam/AFP.

18 Summer 2006 Lebanese families packed their belongings and prepared to return to their villages. The Palestinians held farewell parties in schools and one could see Palestinians and Lebanese dancing to Palestinian folkloric songs. The next day, people were exchanging addresses and telephone numbers. The prevailing sights were of farewell hugs and tears shed on departing friends.

Mahmoud Zeidan is an activist in the field of Palestinian refugee rights and member of AIDOUN  LebanonThe Role of Palestinian Refugees in Assisting Lebanese Displaced Persons during the Last Israeli War on Lebanon .

More in this category: « Prison for Palestinians Israel’s War on Lebanon »
back to top