Editorial: A Few Words on the “New Order” Featured 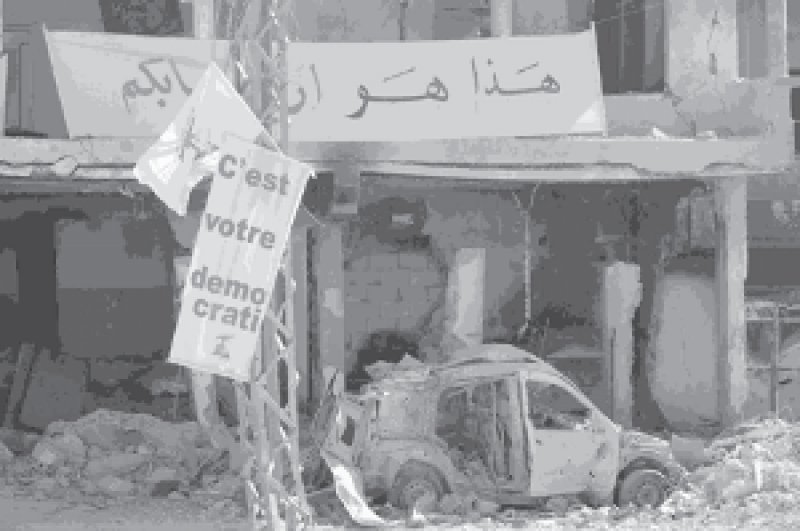 Was it as a slip of the tongue - a ‘new order’? A new order allegedly bringing democracy, human rights and the rule of law to the Middle East. But how, and at what price? By ‘reshaping’ and ‘re-ordering’, a vision of self-determination is imposed upon the people of the region. A vision vested in the interest of the superpowers. A vision that calls for appeasement, alignment and acquiescence, not the expression of a people’s rights. It is this same vision that has undermined the capacity of the international community to intervene in Lebanon and the occupied Palestinian territories (oPt).
Israel’s failure to subdue the people of Lebanon and Palestine, in addition to the debacle of the United States and its coalition in Iraq, sends a clear message to the advocates of this ‘new order’: it is a failure. The people of the region have refused to submit.(1)

The Security Council of the United Nations has failed; failed to stop Israel’s war on Lebanon; failed, also, to implement all relevant UN resolutions to the conflict in the region. “When it suits Israel and the United States, United Nations resolutions such as 242 and 338 on Palestine or 638 on releasing hostages can be ignored for years. But other resolutions acquire a Biblical patina and instant compliance is required of them.”(2) Needless to say, all resolutions are intertwined and that in order to achieve ‘a just and lasting peace’ and respect for international law, they must be implemented in a comprehensive manner. This, it should be noted, is also what the people of the Middle East, including Palestinians, and the people of Lebanon and Iraq, want.

The debates within the Security Council over whether there should be an immediate cessation of hostilities exposed the partisanship, and further, the collusion of the Western states with Israel’s war on Lebanon. The United States’ reluctance to call for an ‘immediate ceasefire’ and its preference for a “sustainable ceasefire”(3) revealed not only its power over the Council and support of Israel, but also its desire to achieve something more than a ceasefire, i.e., a ‘new order’. Indeed, Condoleeza Rice said that for a UN Security Council resolution to pass, “both an urgent ceasefire and a lasting settlement” were necessary.(4) While both are needed, a lasting settlement cannot be achieved in a few days, and certainly not while the people of theregion are under attack, and without considering all relevant UN resolutions. In other terms, there is no quick fix.

The willingness of the United States and some European states to wait until the time for a ‘sustainable cease-fire’ is ripe, i.e. that people are weakened to accept whatever is presented to them, has again undermined respect for international law and the credibility of the United Nations in the region. Even the UN Secretary-General came out after Israel’s massacre of the Lebanese village of Qana to express “dismay that my earlier calls for immediate cessation of hostilities were not heeded” stating that “the authority and standing of this Council are at stake” and that “people have noticed its failure to act firmly and quickly.”

In the strongest terms possible, the Secretary-General of the United Nations said, “for the sake of the people of the region and of this Organization, I urge you to act, and act now.”(5) The UN Special Rapporteur on the Situation of Human Rights in the Occupied Palestinian Territories, John Dugard, wrote, “the image and reputation of the United Nations has, sadly,suffered in the occupied Palestinian territories” and demanded  “real action on the part of the Organization.”(6) But as the Quartet “turns to punitive measures designed to compel Hamas
to change its ideological stance, or to bring about regime change”, the Rapporteur writes that its goal, i.e. the realization of the right to self-determination of the Palestinian people, seems to have been lost.

Dugard further wonders whether the United Nations is in fact “in law authorized to make itself a party to economic coercion through the Quartet without following its own procedures under the Charter.” He concludes, “it is pointless ...to appeal to the Quartet to strive for the restoration of human rights, as neither respect for human rights nor respect for the rule of law features prominently on the agenda of this body.... In these circumstances, the Special Rapporteur can only appeal to the wider international community to concern itself with the plight of the Palestinian people.”(7)

There is thus an urgent need for the international community, more particularly the United Nations, to review its approach to conflict resolution in the Middle East. Firstly the UN must demonstrate that it is able to apply human rights in an indiscriminate manner to all peoples of the region. Secondly states must be held accountable for failing to implement international law, particularly the International Court of Justice advisory opinion and UN resolutions.

IDP - A useful category?
This issue of al Majdal addresses questions pertaining to internally displaced persons (IDPs). According to the working definition provided by the Guiding Principles on Internal Displacement, IDPs are “persons or groups of persons who have been forced or obliged to 4 Summer 2006 flee or to leave their homes or places of habitual residence, in particular, as a result of or in order to avoid the effects of armed conflict, situations of generalized violence, violations of human rights or natural disasters, and who have not crossed an internationally recognized State border.”(8)

Yet, questions remain as to the usefulness of the IDP category to a conflict where borders are undefined, and where, the international community has failed to provide protection. This issue of al Majdal thus aims to encourage discussion as to the relevancy of the IDP category to the Palestinian case, and raise awareness about the situations of internally displaced Palestinians in Israel and the oPt.

More in this category: Palestine after Israel’s “Convergence” -which never happened »
back to top