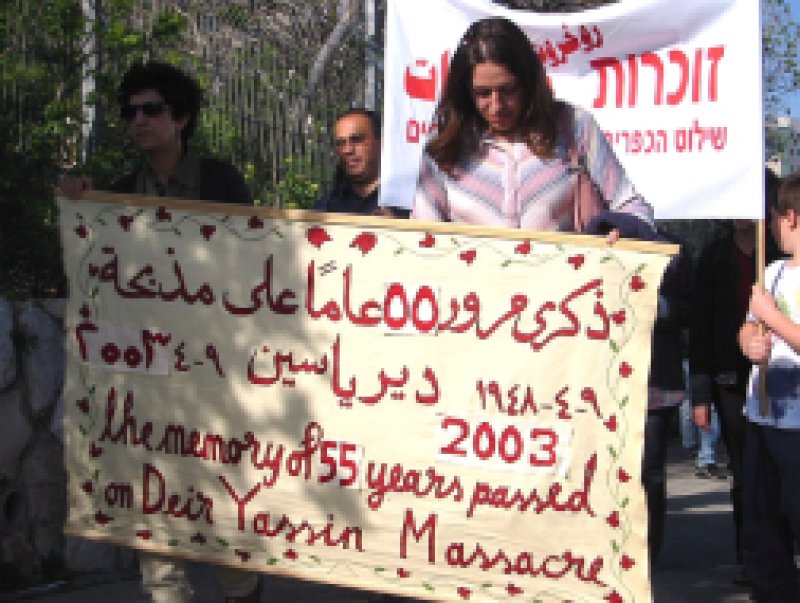 Since the commemoration of Land Day one year ago, Israel has continued to dispossess and violate the basic human right to property of the indigenous Palestinian population. Inside Israel, the government demolished more than 150 Palestinian homes in numerous villages and towns, including the al-Araqib area/Naqab (south of Rahat), al-Maqiman/Naqab (near Laqiya), Beir Hadag/Naqab, al/Qaren/Naqab, Majd al-Krum, Sajour, Jaffa, Lydda, Ramle, and Kafr Qasem. Villages affected by ongoing land confiscation for the new ‘apartheid wall’ currently under construction to separate Palestinians from the 1967 occupied Palestinian territories from Israel include Jatt and Baqa al-Gharbiyya. During the year, the Israel Lands Administration (ILA), which controls most of the land inside Israel (including land expropriated from Palestinian refugees), continued to destroy Bedouin homes and crops to prevent so-called ‘encroachment’ on ‘state lands’, the vast majority of which was expropriated from Palestinians.

In the 1967 occupied Palestinian territories expropriation and damage to property continued unabated. Since Land Day 2002, over 200 homes were demolished for punitive reasons (Btselem). Since the beginning of the second Palestinian intifada in September 2000 it is estimated that Israeli military destruction of homes has affected some 5,500 Palestinian refugees. In addition, Israeli military forces destroyed 400 refugee shelters in Jenin refugee camp in April 2002. According to UNRWA, Israel demolished an average of 38 refugee shelters per month in the Gaza Strip in 2002. Demolition of Palestinian homes built without a permit (which are difficult and often impossible to obtain) in eastern Jerusalem and so-called ‘Area C’ of the West Bank continues; the number of ‘administrative demolitions’, however, now pales in comparison to homes demolished during Israeli military operations. Thousands of Palestinian homes in the 1967 occupied territories have been damaged during Israeli military operations. As of March 2003, more than 15,000 dunums (15 sq. km) of Palestinian-owned land was targeted for expropriation to construct the new ‘apartheid wall’ to separate Palestinian residents of the West Bank and Gaza Strip from Israel.

For the first time ever, the annual Land Day Conference organized in Nazareth on March 26 by the Arab Center for Alternative Planning (ACAP) and the National Forum of Arab Mayors was dedicated to the problem of internal displacement of Palestinians in Israel. The program included presentation of recent academic research (BADIL, Usama Halabi, Hilel Cohen, a.o.), a presentation of lessons learned from IDP return and restitution in Bosnia-Herzegovina (Paul Prettitore, OSCE), and commentary by Wakim Wakim, head of the Association for the Defense of the Rights of the Internally Displaced in Israel (ADRIC). Additional experts spoke on a range issues related to Israel’s current campaign against the Bedouin and house demolition. For information on papers presented at the conference and follow-up see the ACAP

March 30 was a day of general strike called by the Arab Higher Monitoring Committee in Israel to commemorate Land Day and protest ongoing demolition of Palestinian homes and military attacks on Palestinians in the 1967 occupied Palestinian territories. Thousands, including several Jewish-Israeli initiatives (Ta’ayoush, Bat Shalom, a.o.) participated in the two central Land Day rallies held in the Palestinian towns of Sakhnin and Kufr Qassem.

Also on March 30 the Mossawa Center and the Regional Council for the Unrecognized Negev Arab Villages (RCUV), in cooperation with the residents of several unrecognized villages in the Naqab/Negev, organized a day of olive tree planting. [website, Mossawa Center?]

The first week of April marked the 1st anniversary of the destruction of large parts of Jenin refugee camp that left more than 400 families homeless, more than 50 dead and hundreds injured. The Israeli military attack on Jenin refugee camp, a protected civilian area under international law, took place in the context of Israel’s massive assault and reoccupation of Palestinian cities, towns, villages, and refugee camps across the West Bank in April-May 2002.

Despite documentation of war crimes and crimes against humanity committed by Israeli military forces during this period no one has been held accountable. UN Security Council Resolution 1405 (19 April 2002), calling for an international and impartial investigation into events in Jenin refugee camp has never been implemented due to Israeli non-cooperation. Examples of war crimes include extensive destruction of property not justified by military necessity, the use of protected persons as human shields, and intentionally launching an attack in the knowledge that such attack will cause incidental loss of life or injury to civilians or damage to civilian objects.

On the first anniversary of the atrocities committed by Israeli military forces in Jenin refugee camp, numerous memorial events were organized in Palestine and abraod. BADIL launched a special memorial webpage dedicated to the memory of those Palestinians who lost their lives and homes in the camp. The webpage also serves to remind that those responsible for the commission of serious human rights violations and grave breaches of international humanitarian law should be held accountable.

(3) 55th Anniversary of the Massacre at Deir Yassin, Jerusalem

On 9 April, some 100 Israelis and Palestinians gathered at the main gate of Kfar Sha’ul Hospital, Jerusalem, the site of the infamous massacre committed by Zionist forces against the Palestinian villagers in 1948. The memorial commemorating the massacre and depopulation of Deir Yassin was organized by the Deir Yassin Remembered Committee, Zochrot and the Israeli Committee Against House Demolition. Participants convoyed by an equal number of Israeli police and right-wing protestors gave personal testimonies, read out the names of the victims and posted signs on the village site. Testimonies of the massacre and more information in Hebrew language can be found on the Zochrot website: www.NakbaInHebrew.org

(4)The Nusseibeh-Ayalon Plan: Totally Rejected by the Palestinian People

A full-page paid advertisement of the “People’s Campaign for Peace and Democracy” published in the Palestinian on 5 June represented the most recent attempt by Dr. Sari Nusseibeh to make believe that there is support among the Palestinian people for the more than one-year old “agreement” between the Palestinian academic and the former head of Israeli intelligence, Ami Ayalon. The list of some 360 signatories included in the advertisement, however, is hardly worth the money paid. It shows clearly that Nusseibeh-Ayalon are unable to recruit support among influential sectors of Palestinian society (http://pdf.alquds.com/6/page22.pdf).

Back in early May and coinciding with the popular preparations towards the 55th anniversary of the Palestinian Nakba of 1948, public anger was stirred by massive publicity for this Campaign – also called ‘the Destination Map’ – falsely suggesting in its headlines that a Palestinian compromise on the refugees’ right of return would “guarantee a [Palestinian] state in the 1967 borders free of settlements and sovereignty over the capital Jerusalem” (paid advertisement, Nusseibeh-Ayalon, al-Quds, 7 May 2003). Insult was added to fury by the fact that Palestinian activists, especially non-refugees, were individually targeted to sign on to this initiative aimed at dividing Palestinian public opinion on the right of return. All Palestinian political groups responded with a stream of alerts warning the public to “not fall prey to the tricky ambush of the Zionist intelligence” (Fatah-Hebron District, 4 May 2003) and published statements denouncing the initiative. http://female-happiness.com/raznoe/2021-kak-uvelichit-skorost-interneta-do-maksimuma.html An official launching-conference scheduled for 5 May in Ramallah was eventually canceled due to these protests.
(Samples of public statements issued by Fatah-Hebron District and the Union of Youth Activity Centers-Palestine Refugee Camps are included in the Document Section.)

[maybe insert photo of the one-page al-Quds ad? caption: ‘People’s Peace Campaign … Dear citizen, decide by yourself … The Goal Plan guarantees a state in the 1967 borders free of settlements, sovereignty over the capital Jerusalem, and the return of the refugees to the Palestinian state.’ (Paid advertisement, Nusseibeh-Ayalon, al-Quds newspaper, 7 May 2003)

Community Workshops: Towards a Clear Vision on the Right of Return

At the same time, it was understood that recognition of basic Palestinian rights, foremost the right of return to homes and properties lost in 1948, are threatened not only by the Nusseibeh-Ayalon initiative, but even more so by changes in the regional and international balance of forces resulting from the US-led war and occupation of Iraq and the new ‘Road Map’ to peace launched by the ‘Quartet.’ Therefore, Palestinian community organizations in the West Bank requested the support of BADIL for a series of community workshops and debates aimed at tackling the ideological and political challenges of the new era. Despite ongoing Israeli military incursions and curfews, 21 workshops were held between April – May 2003 in the refugee camps of Kalandia, al-Am’ari, Jelazoun, Tulkarem, Nur Shams, Camp. No. 1, Deheisheh, Arroub and Fawwar, in the towns of Nablus and Hebron, and in the Hebron area villages of Ithna and Doura. While BADIL provided publications and relevant background information, speakers and logistic arrangements were organized by a variety of community organizations, among them local Youth Activity Centers, Popular Service Committees and Committees for the Rehabilitation of the Disabled, Yafa Cultural Center/Balata camp, Hiwar Center/Deheishe Camp, and the Nakba Memorial Committee-Hebron. Speakers included representatives of PLO and PNA institutions (PLO Refugee Department, PNC, PLC) and political groups, academics and activists.

Debates and workshops resulted in a collective re-affirmation of the right of Palestinian refugees to return to their homes and properties and for a durable solution of their plight in accordance with UN Resolution 194(III). Numerous specific demands and suggestions were issued as reflected in the final recommendations issued by the participants of the workshop, ‘The Future of the Palestinian Refugee Issue in the Context of Current Political Developments’ held at the PNC-Nablus on 26 May 2003:
• Activate PLO institutions and the special refugee committees of the PNC and PLC;
• Work for stronger coordination among all refugee institutions, organizations and initiatives in Palestine and in exile;
• Intensify efforts at public education and awareness-raising about refugee rights among the Palestinian refugee and non-refugee community;
• A call upon the Palestinian political leadership to reject all proposals for solutions that violate the refugees’ right to return to their homes, villages and towns of origin that they were forced to leave in 1948, and to develop a transparent national strategy able to protect these rights in the current era

More in this category: « Palestinian Public Perceptions on Their Living Conditions Commemoration of the Depopulation and Destruction of Palestinian Villages in 1948 and 1967 »
back to top