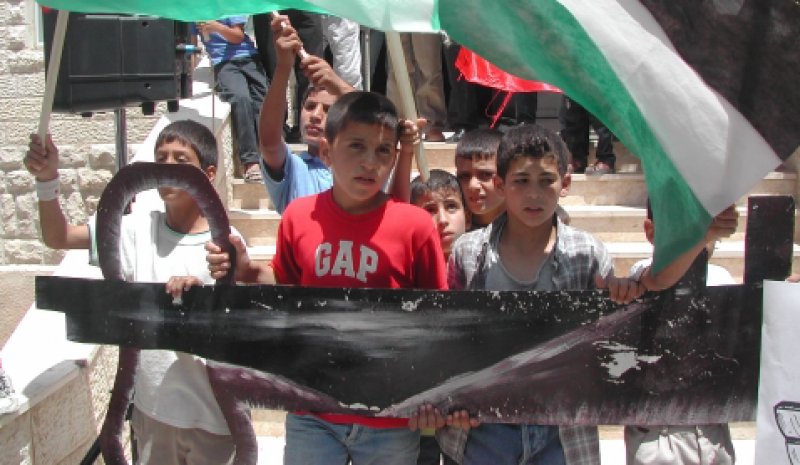 In continuation of efforts at engaging the Jewish-Israeli public in new awareness an debate, Zochrot, Neve Shalom-Wahat al Salam and the Association of the Palestinian Villages of Yalu, Imwas and Beit Nuba marked the anniversary of Palestinian displacement and dispossession in 1967 (al-Naksa) with two events under the title,

“Let’s Have the Courage to Get to Know and Share the Pain of our Collective Memory, in order to Set the Basis for Better Neighborly Relations, Cooperation, Reconciliation and Peace.”

In the context of an Israeli activism festival held at Ofer forest on 6 June 2003, Zochrot organized a tour to the 1948 depopulated Palestinian village of Ayn Ghazal located on Mount Carmel south of Haifa. The tour was guided by a Palestinian refugee originating from Ayn Ghazal. A pamphlet with information about the Palestinian village was distributed, and the visitors posted memorial signs at historical village sites.

A Commemoration of the 1967 Conquest and Destruction of Three Palestinian Villages in the Latrun Area – Imwas, Yalu and Beit Nuba – was held on Saturday, 7 June. Participants first gathered in Neve Shalom-Wahat al Salam to visit an exhibition and slide show by photographer Yosef Hochman, an eyewitness of the 1967 destruction and depopulation of the three villages, and to hear personal testimonies by villages residents (Nihad Abu Ghosh of Imwas, a school principle at the time of the occupation; Ahmad Abu al-Rob of Yalu; Ismail Zaid of Beit Nuba), the Abbot of the Trappist Abbey of Latrun, Israeli writer Amos Keinan, who participated in the occupation as a soldier, a.o. Later on, participants proceeded to the nearby site of the three destroyed Palestinian villages now located in the so-called ‘Canada Park’ and posted signs to mark historical villages sites.
(Zochrot: www.NakbaInHebrew.org, This email address is being protected from spambots. You need JavaScript enabled to view it.)

More in this category: « Palestinian Community Debate and Workshops 15 May 2003: 55 Years of the Palestinian Nakba 1948 »
back to top