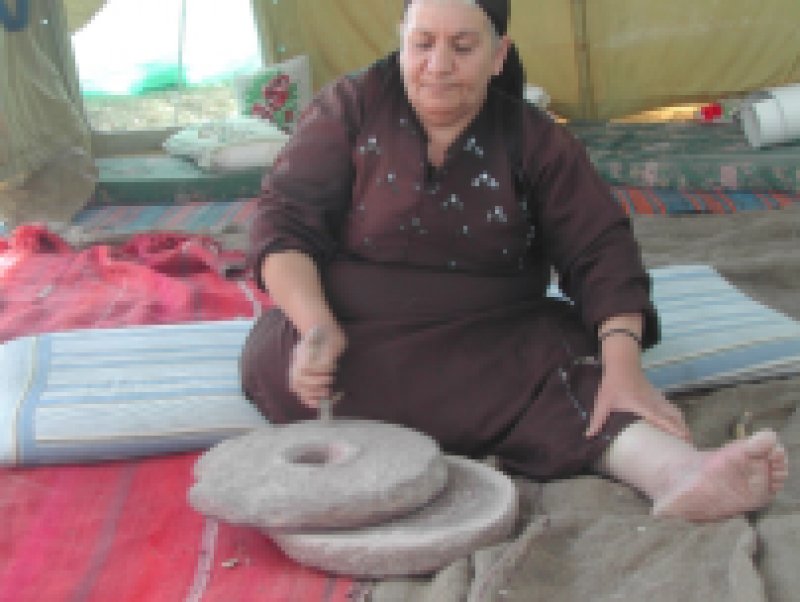 Highlights of the 2003 Nakba Memorial Events in Palestine

Other than last year when all efforts at public organizing for the annual Nakba memorial in the 1967 occupied Palestinian territories were paralyzed by Israel’s massive April-May military re-conquest, the 55th anniversary of the Palestinian Nakba in May 2003 was characterized by active grass-roots organizing in defiance of the ongoing Israeli military presence in Palestinian refugee camps, towns and villages.In the absence of official memorials in the occupied West Bank – a result of the destruction of the Palestinian Authority’s infrastructure – the 2003 Nakba commemorations were almost entirely carried by Palestinian community organizations on both sides of the ‘Green Line.’ A growing number of Jewish-Israeli participants at Palestinian memorial events, and creative efforts by some Jewish-Israeli initiatives to find new and compassionate ways of remembering the Palestinian Nakba at the sidelines of Israel’s independence celebrations, gave additional significance and depth to this year’s Nakba commemorations and the demand for recognition and implementation of Palestinian refugees’ right of return.

The 55th anniversary was launched on 1 May by a TV Campaign for the Commemoration of the Palestinian Nakba. This Campaign, an initiative of BADIL and the Palestinian TV network Ma’an, involved eight private Palestinian TV stations broadcasting in and beyond the West Bank. Aiming to raise awareness for the importance of collective history, memory and recognition of Palestinian rights, TV stations carried daily, between 1 – 15 May, video clips and feature films telling the story of Palestinian displacement, diverse Palestinian efforts at coping with life in exile and the struggle for return and self-determination.

7 May 2003 marked the day of the Palestinian Nakba – and Israel’s day of independence – according to the Hebrew calendar. Several thousand people, including internally displaced Palestinians, members of Palestinian political and social movements, parliamentarians and representatives of Palestinian national institutions in Israel and some 200 Jewish Israelis (Ta’ayoush, Zochrot, Bat Shalom, a.o.), participated in the 6th Annual Return March to the 1948 depopulated Palestinian village of Umm al-Zeinat located on Mount Carmel (Haifa). The march was organized by the Association for the Defense of the Rights of the Internally Displaced (ADRID). Participants posted signs marking historical village sites. Speakers at the final Nakba memorial rally in Umm al-Zeinat called for the right of Palestinian refugees and internally displaced to return to their homes and properties.

Nakba memorials in the 1967 occupied Palestinian territories peaked on 15 May with popular marches and rallies held in Bethlehem, Ramallah, Hebron, Tulkarem, Nablus and in towns and camps of the Gaza Strip. In Ramallah, a Nakba memorial address by President Arafat was broadcast life to the rally gathered on Manara Square. A series of popular activities, many of them facilitated by BADIL, preceded the 15 May memorials and continued until the end of the month: public call in TV-debates (Afaq TV, Nablus), discussion and handicraft with children (Askar camp, Hebron area villages and camps), ‘Week of Jerusalem and Return’ (al-Quds Open University, Tulkarem), cultural exhibitions and film screenings (Deheishe camp, Tulkarem), sports and an open-air festival for first-generation refugees (Deheishe camp).

A guided visit to the 1948 depopulated and destroyed village of Miska (‘Triangle area’) was organized jointly by the Committee of Miska Residents and Zochrot on 7 May. This visit continued the tradition, formed under Israel’s military government in the 1950s – 1960s, of village visits by internally displaced Palestinians on Israel’s independence day, the only day in the year Palestinians were permitted access to their land and homes. Tens of Israeli visitors re-posted signs that had been destroyed after an earlier visit, listened to the memories of the Miska residents and joined their demand to return to their lands.

On 15 May, dozens of Israelis gathered in central Tel Aviv to witness the ‘NOT-Declaration of the Establishment of the State of Israel’ by a ‘new Ben Gurion’ who changed his mind. The ceremony was followed by an evening discussion at the Rabita Club in Jaffa, entitled ‘1948: What was and what could have been.’ The discussion was attended by some 100 Palestinian and Jewish people.

Why this BADIL Initiative?

BADIL’s decision to publish this Hebrew-language Information Packet reflects our firm belief that a rational and constructive Palestinian-Israeli debate about Palestinian refugees’ right of return is a necessity and overdue. This, because the right of return as an individual right of millions of Palestinian refugees is here to stay. It can neither be relinquished by the Palestinian leadership nor cancelled by force. It can, however, be tackled based on international law and human rights conventions, which have guided solutions to complex refugee issues in many other parts of the world, and on the basis of UN resolutions applicable to the particular case of Palestine/Israel, especially UN Resolution 194.

BADIL’s Information Packet addressed to the Jewish-Israeli public aims to clarify the universal standards and principles that have guided implementation of refugee return, housing and property restitution and compensation elsewhere in the world. We hold that abidance with these standards and principles by the Jewish-Israeli society will not only open the door for a solution of the protracted Palestinian refugee question, but also for the normalization of Jewish-Israeli existence in the region. Moreover, the BADIL Packet aims to show that Palestinian refugees are not ‘irrational’ people demanding to restore a lost past at the expense of a present denied, but people who – if engaged on the basis of their right of return – are ready and able to contribute to reconciliation and the building of a just and durable peace in Israel/Palestine.

While a rational and constructive Palestinian-Israeli dialogue about the right of return is necessary and overdue, it may not be possible with Israel’s current political and ideological leadership, including major sectors of the Israeli academia and media. It is, however possible to engage sectors of Israel’s critical and progressive civil society. Along this line, two Israeli organizations will cooperate with BADIL in dissemination and follow-up debate of the Hebrew Packet/The Right of Return: Zochrot (Remembering) has agreed to introduce it to the Israeli-Jewish activist community and Andalus, a progressive Israeli publishing company will facilitate distribution among the Israeli media, parliamentarians and academia.

(7) Report from Al-Awda (US and UK) and other activities outside?
[Don’t have anything. Fill in.]

Seminar-1, Ghent: ‘The Role of International Law and Human Rights in Peacemaking and Crafting Durable Solutions for Palestinian Refugees,’ 22-23 May 2003

The University of Ghent/Department of Third World Studies acted as the host of the first in a series of four seminars to be conducted in the framework of the 2003 – 2004 BADIL Expert Forum. The Ghent seminar was convened by BADIL in order to revisit a decade of failed efforts at Middle East peacemaking and the role, or non-role, of international law in crafting durable solutions for Palestinian refugees. Thirty-three legal experts, researchers and human rights activists working in academic institutions, UN agencies and the NGO community, as well as delegates of the PLO, the Canadian government and the European Union, examined Palestinian refugee rights under international law, comparative experience with peacemaking and the role of international law in recent diplomatic Middle East peace efforts.

The final session was dedicated to the question of how to create political will, i.e. how to put legal principles into action. The seminar concluded with a series of suggestions, which lay out a broad framework for concerted interdisciplinary action, including the need to:
• Strengthen the Palestinian message about Palestinian refugees’ right of return by highlighting the discriminatory character of the state of Israel as a ‘Jewish state;’
• Intensify the Palestinian debate about the right of return among refugees and non-refugees and guarantee active involvement of the Palestinian exile in the debate about Palestinian political agenda and priorities;
• Engage in a systematic effort at public awareness-raising;
• Build stronger and broader alliances with the media, political leaders and anti-colonial movements;
• Engage Israeli society in a principled debate about the circumstances of the creation of the Palestinian refugee issue (Nakba 1948) and the requirements for a durable solution;
• Develop research and tools for the advancement of a rights-based solution for Palestinian refugees.

More in this category: « Commemoration of the Depopulation and Destruction of Palestinian Villages in 1948 and 1967 Refugee Protection »
back to top